With all of the portable mobile accessories available these days that potentially improve your mobile device, WonderCube, the 8-in-1 cube hopes to make sure you have everything you need, right there on your keyring. 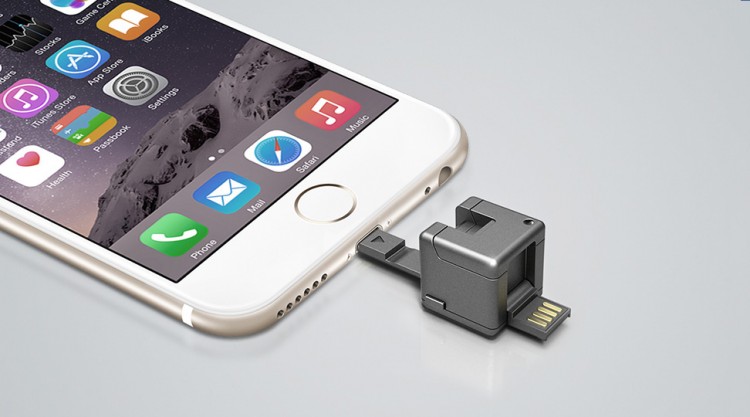 The one-inch silver cube is essentially what you’d expect from crowdfunders like Kickstarter or IndieGogo but the difference is this swiss army knife of gadgets attempts to do the bare necessities, without going overboard. The WonderCube is just that, a cube, featuring several different accessories. Including a charging cable, a microSD slot for extra storage, an LED torch for those moments you might need some illumination in a dark room, and even a stand for your phone.

the storage feature works over USB OTG, so you can expand your android’s phone storage (up to 128gbs). Designed by Mutants Designlab and placed on Indiegogo, the WonderCube is splash-proof, and will be able to placed on your keyring for easy transport. Starting at $49, it’s a steal, and with these features, how can you really NOT want one?

– Phone charger. Through the flip-out USB and either micro-USB or Lightning connectors, you can connect your phone to the mains and get it charged.
– MicroSD Card Reader. A built-in card reader means you can add up to 64GB of storage on the go.
– Phone Stand.A micro-suction cup plate lets you stick it to the back of your phone and props it up at an angle for your viewing pleasure.
– Sync.The same connectors that you use to charge can be used to sync.
– Emergency charger.If you’re nowhere near an outlet, you can just pick up a 9V battery and use this to give yourself up to 3.5h of extra talk time.
– LED Torch. Use it to light your way with its built-in LED torch.

Expected to be released in late-August 2015, the WonderCube can be funded in three different ways on Indiegogo now.