Like most households, as I look around, there are devices everywhere that need charging.  In my house, that means one iPad, an iPad Mini, an iPhone SE, a Google Pixel XL, a Yoga Book tablet, a Nexus 6P and three different portable battery packs.

And that’s just two people, me and my wife, and assuming I don’t have devices in for review.  When the kids come to visit, add at least two more devices each.  That’s where a device like the NTONPOWER Charging Station can really come in handy.

The NTONPOWER Charging Station has 10 USB-A ports with 10 slots built into the top of the station to hold devices while they are charging.  It can serve as the one location where everyone’s devices can be charged safely and without having to worry about USB cables and AC adapters to charge them.  And I live in a home that was built in the mid-70s so wall outlets aren’t exactly aplenty. 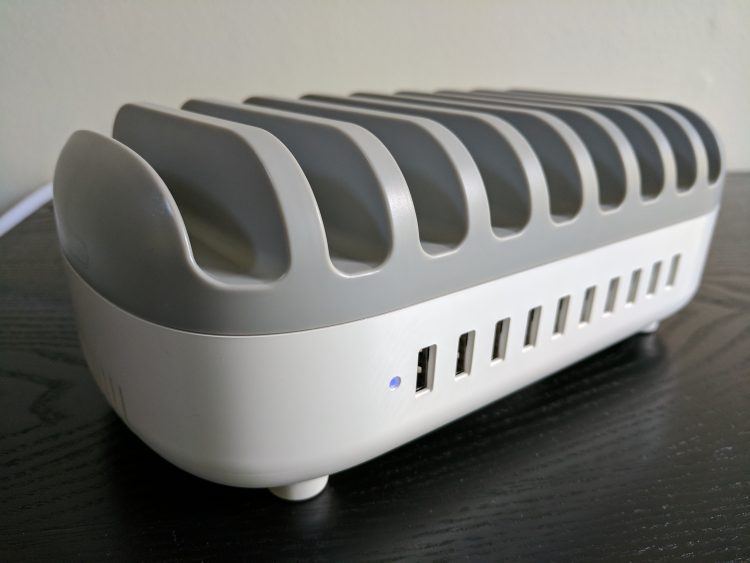 Front of the NTONPOWER Charging Station

Recently the NTONPOWER team sent their charging station, the NUK-10P, to us here at Gear Diary to review.  While it’s certainly big, it has an excellent design and charges devices efficiently while keeping itself cool thanks to the built-in cooling fan.  If you are looking for a single accessory to charge a lot of devices – at home, work or in a retail store – the NTONPOWER Charging Station should be one on your short list to consider.

The NTONPOWER Charging Station measures 12.5 x 6.5 x 5 inches and weighs in at 2.5 lbs.  The base of the station is white while the top slots, ten in all, are in brushed aluminum.  On one side is where you will find the D-Style AC socket to power up the station with the large power button to turn on the station next to it.

On the opposite side, you will find the 10 USB-A ports for connecting your devices.  Each port is able to put out 5V/2.4A and all of the ports work at this rating simultaneously.  This is important to know as other stations will throttle down to 2.5V/1A when they are under heavy load.  Not so with the NTONPOWER station.  The station does not support Quick Charge technology.

On either short end of the station, you will find cooling vents with a fan and cooling vents at the bottom of the until too.  There is a built-in cooling fan in the station that will be turned on once the internals of the station reaches 149F to assure the electronics are kept safe from overheating and potentially overheating your devices.  The fan will turn off once the unit cools down to 113F.  This is one of the several layers of protection for devices built into the NTONPOWER Charging Station.  It also has port detection technology built into it.  This means that it detects the type of device connected to it and determines the optimal amps to send to it so it is charge quickly and efficiently.  This prevents overcharging (which can damage your device) but also undercharging which makes the charging process slow.

The feet of the charging station are rubberized so the unit won’t slip around on your desk or any other area which you have set it up.

Overall, the NTONPOWER Charging Station does a good job of looking good while fundamentally being a utilitarian accessory in your home office, work office or retail store.  The company has done a good job of making it look far more modern than other “black box” style stations that look, frankly, ugly.  Not the case here and dare I say, an accessory you won’t be trying to hide the moment you open the box.

Setup of the NTONPOWER Charging Station is pretty straightforward.  Once the unit is plugged into AC, you simply connect a USB-A cable to the station, connect your device, and cradle the device in one of the slots.  Charging happens quietly and efficiently.  I had a maximum of 8 devices connected to the charger at once and only briefly, when direct sunlight was hitting it, did the cooling fan actually turn on for a few minutes.

For the most part, devices with cases will fit within the aluminum slots on top of the charging station.  My wife’s iPad Mini has a rather bulky Otterbox case on it and I had to wedge that one in a bit, but otherwise, no issues.

One recommendation I do make is that you invest in some short USB-A/A or USB-A/C cables as you need them.  As you can see from the gallery shots below, long cables make for a bit of a messy situation the more devices you add.  This isn’t the fault of NTONPOWER and shouldn’t negatively reflect on them.  It’s my observation and, frankly, probably my own OCD about cable neatness kicking in.

The use cases for the NTONPOWER Charging Station are varied.  I’ve pointed out how I use it at home but for those who have office environments where you are sharing an open workspace, this station could be the modern equivalent of the “water cooler” as you all stop to charge devices and catch up with each other.

Further, for schools where tablets are shared in a room between students, this can be a fast and efficient way to charge them but also simplifies the “where to go” to charge process in the classroom.  The same could be true for retailers who have portable scanners or other points-of-sale in their hands (Be it an iPhone, an iPad or Android device) where at the end of shifts or the day, there is one place where all of these handheld devices go to be charged.  It can also quickly help identify a device is missing simply because there is an open slot.

If you need a large charging station that can quickly and efficiently charge all the devices in your home or office, the NTONPOWER Charging Station is certainly one to consider.  It looks far more modern than similar products out there and provides safe charging for all of your devices while not slowing down when you have every port in use.

The NTONPOWER Charging Station is $79.99 and available on Amazon [affilliate slink].

What Needs Improvement: Nothing – it is a great device!

Front of the NTONPOWER Charging Station 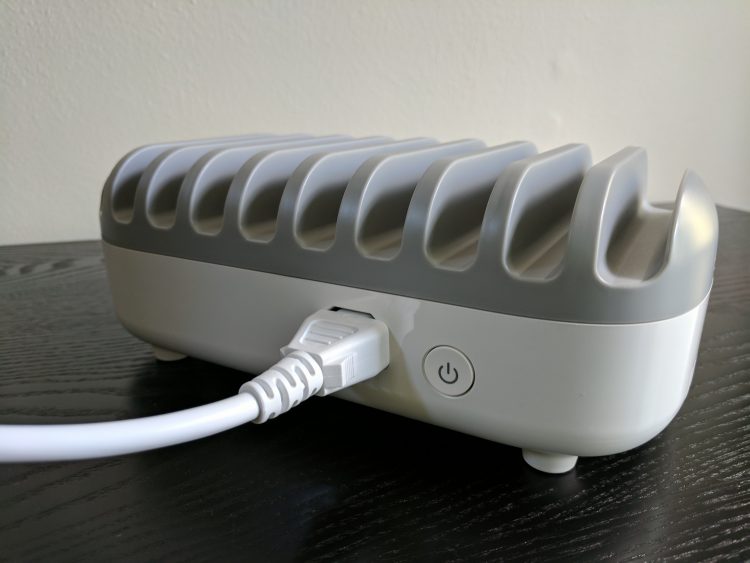 Rear of the NTONPOWER Charging Station 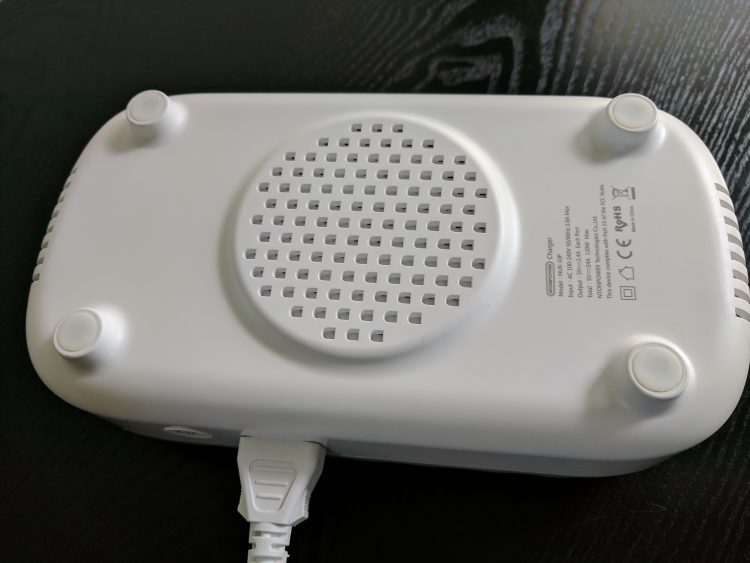 Cooling fan on the bottom of the NTONPOWER Charging Station 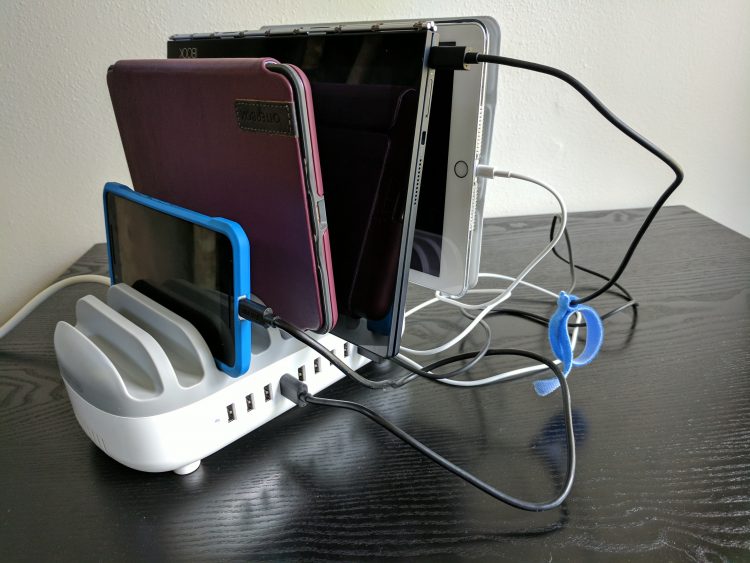 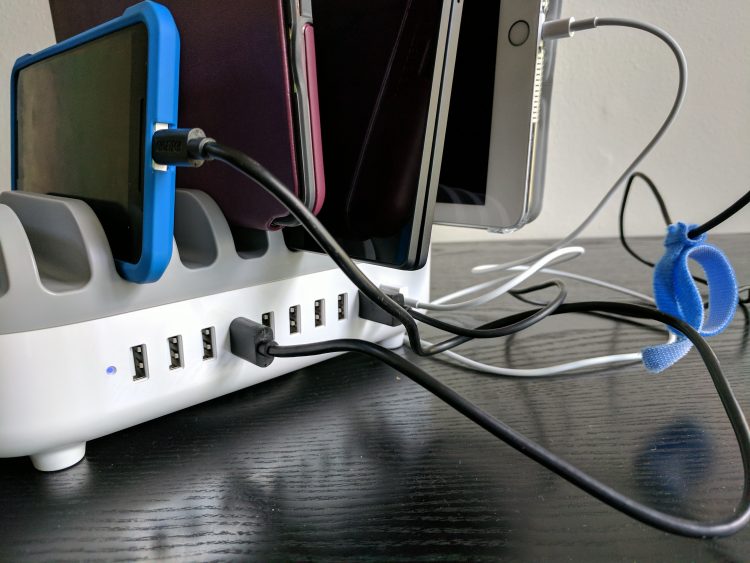