A few years ago it looked like the laptop was dying. Instead, a combination of bigger phones and touchscreen computers have pushed new and better innovations into the laptop market, and Samsung is at the forefront of these with their newest additions the Notebook 9 line! 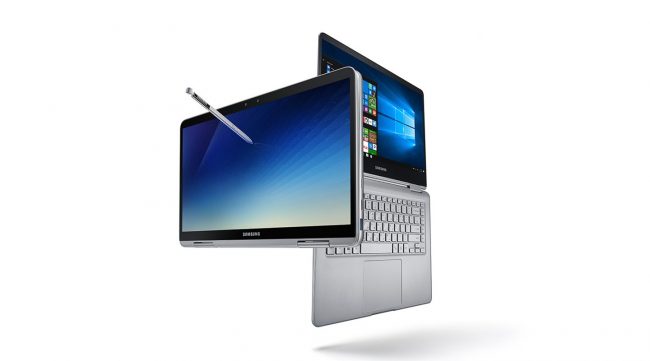 If you have Microsoft Surface envy, check out the Notebook 9 Pen, a 2 in 1 laptop with S-Pen support and a 360 degree hinge. At only 2.2lbs, it is light enough to function as a tablet or a laptop, and the S-Pen allows you to write, draw, and otherwise interact with the screen using a pen input. Best of all, the S-Pen doesn’t need a battery and removing it from the slot automatically launches Air Command, which gives you a menu of options for how to use the pen input.

Samsung has options if you’re looking for a more traditional laptop experience as well. The 2018 Notebook 9 comes in screen sizes ranging from 13.3″ to 15″, offers an aluminum metal body and weighs in at a featherweight 2.84lbs. There’s also a feature called “always-on power” but it’s not entirely clear what Samsung means by that. However, the Notebook 9 also supports fast charging, so you won’t have to deal with a dead laptop battery right when you’re ready to begin editing the great American novel. Or browsing Reddit. Either way, the Samsung Notebook 9 will handle it powerfully and won’t judge you. Much.

No word on pricing yet, but the current Notebook 9 lines run from $999 to $1,399, so I would venture a guess that we’re looking in a similar range for the next generation. More information will be available at CES 2018, so stay tuned for details and start budgeting now!