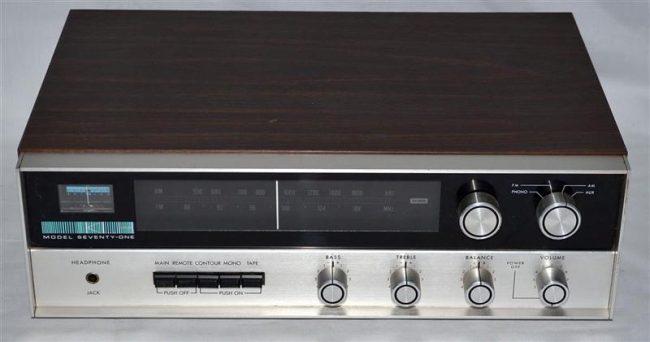 I often feel a bit like a fish out of water.

While other movie buffs are replacing all of their DVDs with BluRay, I’m raiding garage sales for videotapes. While other gamers are flocking to games like Fortnite, I’m still playing Tony Hawk Pro Skater 2—on the original PlayStation, at that.

And while other audiophiles are moving towards lossless audio and wireless speakers, I’m scrounging through thrift stores and online forums for the best gear of yesteryear.

It can be difficult to sift through all of the cheaply made, often-broken equipment. But every once in a while, I stumble upon a true diamond in the rough.

Such as this KLH Model Seventy-One stereo receiver.

I was immediately attracted to its natural wood casing and teal accents (the radio dial lights up teal as well). I had never heard of the brand before, but the price was low enough (eight dollars!) that I felt like I could take a gamble on it. If I didn’t like it, I could flip it on eBay for a quick profit.

I took it home and tested it against my existing stereo—my dad’s old Sansui that I had inherited from him when I first started collecting records. For years, that stereo had consistently stood tall against a flow of vintage Kenwoods and Technics that promised better performance but ultimately paled in comparison. So I wasn’t expecting great things out of this brand I had never heard of.

Boy, was I wrong.

Despite boasting an unimpressive 50 watts, the KLH kicked out an absolutely massive signal. The first thing I noticed was the absolutely insane low-end. I had the EQ knobs set to around the same positions as the Sansui, but the bass on the KLH was like a roaring beast. I usually have it set to -3, and even then, it’s a little overpowering.

But it wasn’t just the killer bass that stood out. It was exceptionally articulate. A lot of times the warmth of vintage stereos can get a little muddy—especially when listening to vinyl. But this stereo receiver was nice and crisp.

After a little cleaning and a minor tune-up, I downgraded the Sansui to my secondary system and installed the KLH in the main set up. And so far, it has proved to be a worthy successor.

It sounds great, but I was forced to do a little finagling with the inputs.

While I do most of my listening on vinyl, I do have a tape deck, CD player, and aux cable that I use on occasion. My old Sansui had a phono input, a CD channel, and two tape inputs, one of which had an aux cable. However, this KLH only had one tape input.

To compensate for this, I bought an RCA switcher and plugged the CD player and aux cable into the same input. Problem solved. And, I use those channels rarely enough that it’s not much of an inconvenience.

In all, this stereo receiver is one of the best buys I’ve ever made. You couldn’t ask for a better ratio of performance to price.

The KLH Model Seventy-One is a bit of a rarity, but other KLH stereo receivers can be found on eBay.

What I Like: Beautiful design, simple to use, excellent sound

What Needs Improvement: One more input would be nice, but not necessary