Since getting the iPhone X, I’ve been on a mission to place wireless charging stations in each room of the house. Until now, however, the charging pads were just that, charging pads. The Azpen DockAll D108 Fast Wireless Charging Sound Hub offers wireless fast charging for Qi-enabled phones but, as the name indicates, also doubles as charging and sound hub. 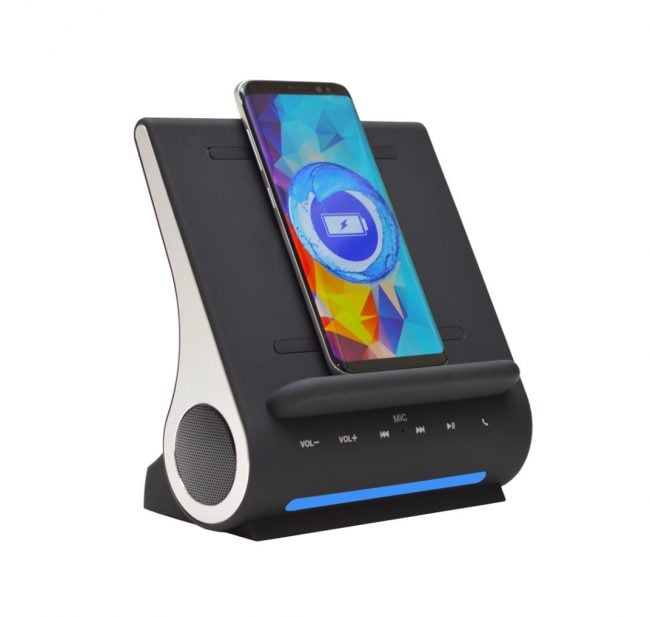 The Azpen DockAll D108 Fast Wireless Charging Sound Hub has an MSRP of $229.99. That makes it far pricier than anything that only offers wireless charging, but this is a wireless charger, a Bluetooth speaker, a wireless speakerphone and a dual-USB charger. 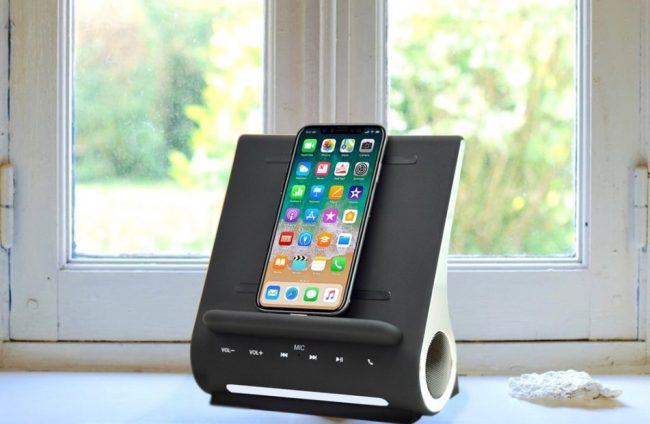 Let’s take a tour of this rather unusual accessory. 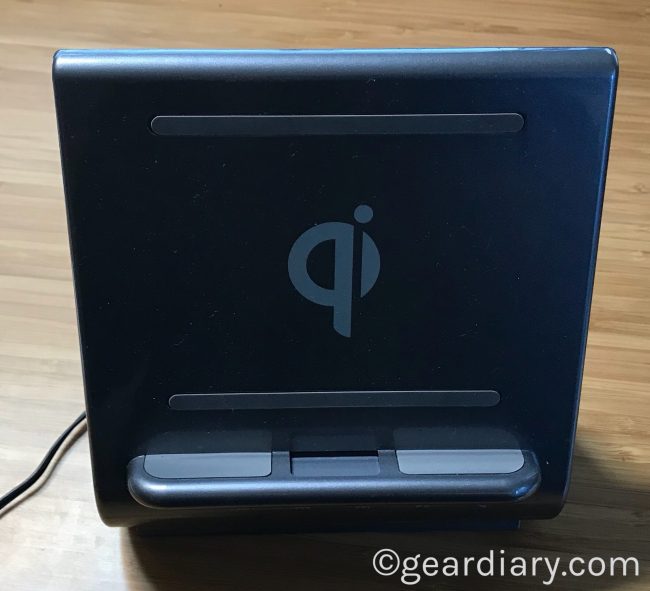 The front of the D108 has a ledge large enough for pretty much any smartphone and even most tablets. The hard plastic surface is interrupted by two strips of soft material that will help protect phones placed on it even if they are not ensconced in a case. The same soft material covers most of the upper portion of the “ledge.” 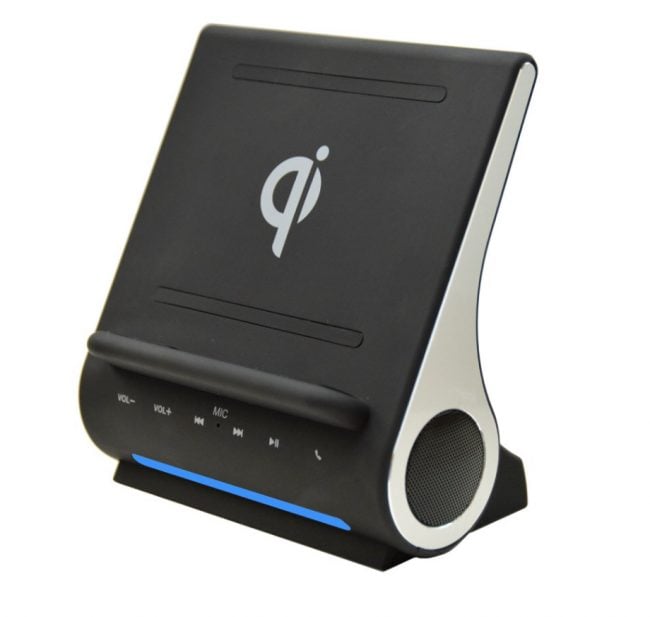 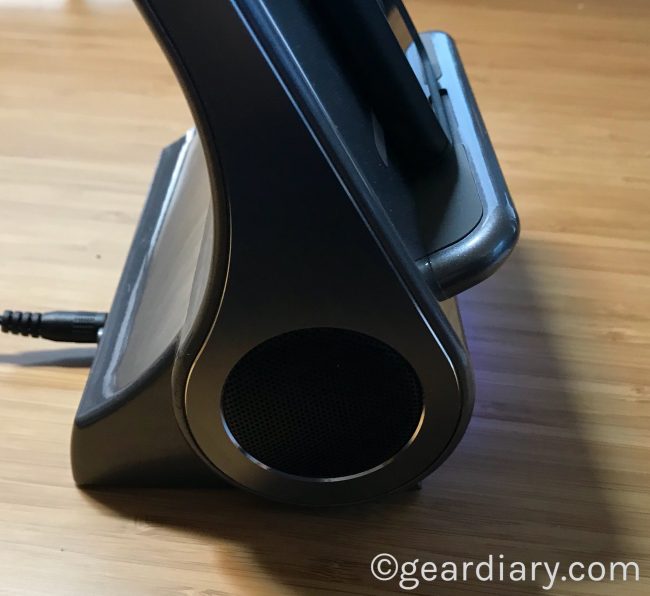 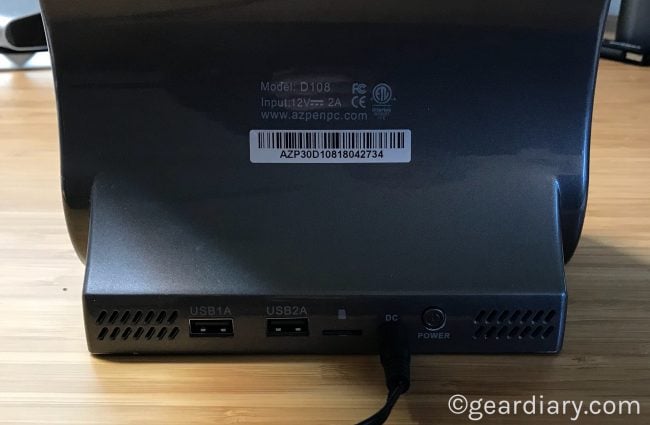 On the back is the DC Power In port, the power button, a slot for a micro USB card, a 1A USB port, a 2A USB port and the stereo speakers.

The DockAll is designed to quickly charge Qi-enabled smartphones and is even able to charge phones when they are in which cases. The company claims that even includes cases like the OtterBox Defender, although I don’t have one to test. I did try the charger with an assortment of cases and all of them charge my iPhone X without issue. 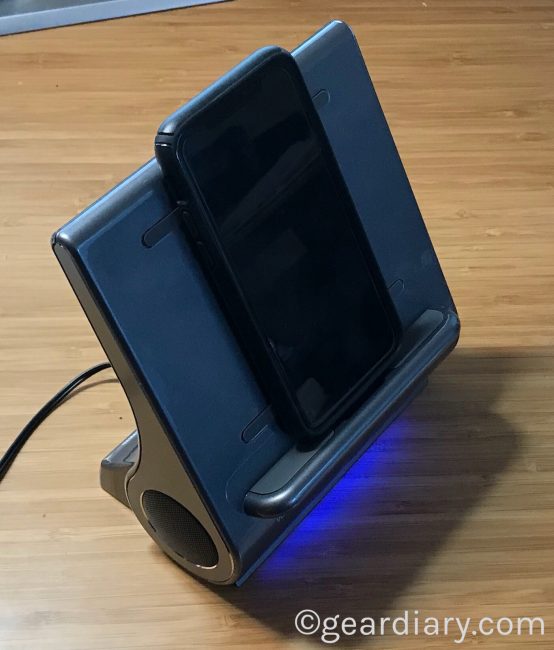 The “ledge” that holds phones in place as they charge is also large enough to handle tablets up to 13” in size. While my iPad Pro doesn’t have wireless charging, I do like the fact that I can place it on the DockAll and have it positioned at an ideal viewing angle. I also like the fact that I can pair it and have the audio come through the Dual Channel 5 watts tweeters with bass ports. 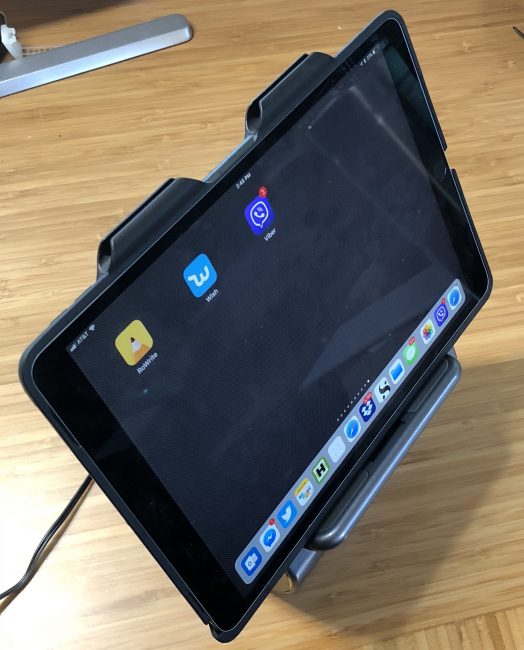 As for the audio, it is good, but won’t be winning any awards from audiophiles. The speakers are certainly better than what the iPhone or even the iPad offers, but it is still audio coming from two small, 5 watt speakers. If you are really into great audio, you will still want to pair your device to something dedicated to great audio. Still, the speakers on the device are a definite step up from what you would otherwise get if you were using the phone or tablet alone. 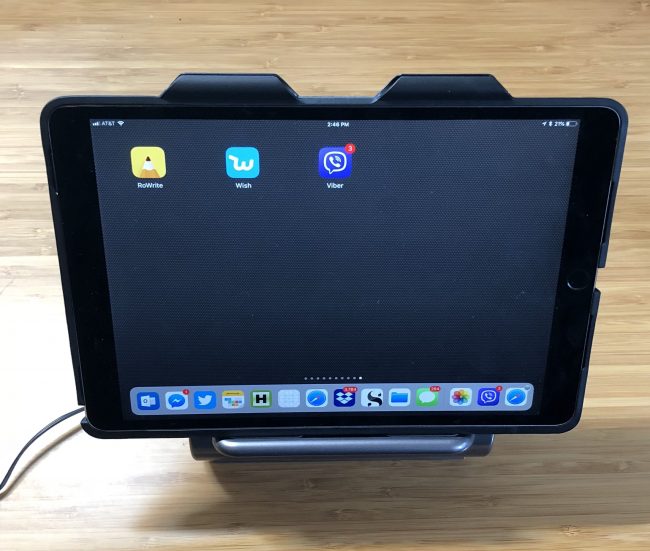 As the company notes:

Azpen DockAll D108 is a stylish Qi wireless fast charging docking station with a Bluetooth 4.0 speaker system that provides premium sound through Dual Channel 5 watts tweeters with bass ports. The Azpen DockAll D108 also has two full size USB ports, a MicroSD slot, a built-in microphone, front panel controls, Wireless 802.11 b/g/n, and it works with the toughest smartphone cases including OtterBox Defender.
The DockAll allows you to charge multiple devices at the same time via wireless or through a wired connection and is capable of docking numerous sizes of phones and tablets up to 13 inches.
With Qi wireless fast charging technology, the DockAll can charge certain phones wirelessly while sitting on the docking station. For phones that are not Qi capable, the docking station has two USB ports on the back for charging additional devices.

The Azpen DockAll D108 is a terrific accessory if you have a Qi-enabled device. It is not, however, perfect. In addition to the sound output being good but not great, the unit has a light on the front that lets you know it is on. That’s great since it reminds you not to waste energy when not in use, the on/off button on the back makes it easy to toggle the device on and off, but it also means there will be a glow if you have it on and next to your bed. That isn’t an issue for me but it does annoy Raina. For that reason the unit is residing on my desk rather than bedside where I initially intended to place it. Also, I’m not quite sure what to do with the micro USB slot. Sure, I love the idea of having music on board that doesn’t require a paired device, but my music is mostly from the cloud at this point so using local audio files is a rarity for me. I also don’t quite know how you are supposed to use it since there isn’t a screen that lets you pick playlists. I assume one could put only bedtime songs on it and allow it to run, but that doesn’t make a ton of sense to me. Others may disagree, but I highly doubt I’ll ever use that feature. Finally, I wish the unit had a 3.5mm Aux-In port so I could connect an Amazon Echo Dot and have one unit for all my charging, smart home, and audio needs. 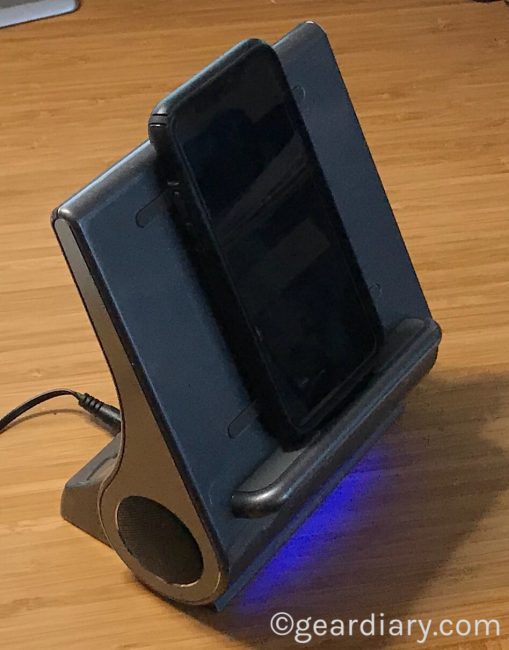 With those exceptions, however, I really like this accessory. It offers a safe, secure spot for a phone or tablet, it lets you charge a Qi-enabled device quickly, it has responsive capacitive buttons on the front and charging ports on the back if you don’t have a device that allows for wireless charging. I use it to charge my iPhone wirelessly while also charging my iPad via the 2A USB port. I think this is something that would be especially great in a dorm room this fall!

If you want something more than a simple wireless charging pad, this is definitely worth checking out. Learn more here.

What I Like: Fast Qi-enabled charging; Two USB-A charging ports on the back; Connects via Bluetooth for audio streaming; Also serves as a stand for tablets; Power button lets you conserve power

What Needs Improvement: No 3.5mm Aux-In port; Not sure what purpose the microSD slot serves; Audio is serviceable but won’t satisfy discerning audiophiles