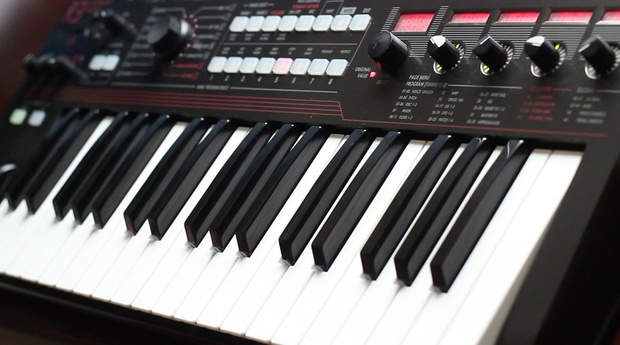 When I looked into adding a synthesizer to my sonic palette, it seemed like the obvious choice was the ubiquitous microKORG. The microKORG is one of the top-selling synthesizers of all time, and with good reason—it features a wide variety of sound and features in an inexpensive, easy-to-use package. It’s been used by everyone from the Killers to LCD Soundsystem to teenagers in their bedrooms.

But as I was researching, I discovered a number of limitations that soured my desire for a microKORG. The arpeggiator was rather limited, there was no built-in reverb effect (and I needs my reverb), and I was iffy on the miniature keys. But while I was reading through forums and web archives, I stumbled upon another member of the Korg line—the Korg R3. It delivered on all of the microKORG’s shortcomings and then some, so I tracked one down on eBay and made the plunge.

Over the last few years, the R3 has been a vital part of my arsenal. But for some reason, it seems like I’m mostly alone in my affinity for it. I can’t seem to find very much love for the Korg R3. In fact, it was discontinued sometime in the last decade. It is, in my limited estimation, one of the most underrated synthesizers ever.

Like the microKORG, the R3 is a 37-key, touch-sensitive synthesizer with octave buttons, programmable pitch bend, and tonewheel, and includes vocoder functionality. But unlike its little brother, the R3 features full-size keys. It has 128 preset slots which by default are separated into banks by general purpose (lead, polysynth, bass, sound effects, etc.). The R3 runs on Korg’s famed Radias engine. It’s essentially the same instrument as the Radias, but with its knobby menu hidden behind a scroll menu.

The R3 has an 8-voice polyphony (that is, how many notes will play at the same time), which, while unimpressive on its own, is twice as much as a the microKORG. The R3 allows you to combine two timbres at a time, either in a layer or split. There are a number of built-in effects, including reverbs. Each timbre can be assigned two effects, as well as one master effect for each preset. You can even route a microphone or instrument cable through the effects chain so you can use the synth as an effects unit for your voice or guitar.

None of this is particularly impressive for a synthesizer, but considering how affordable the R3 is (I found mine on eBay for $400), it more than delivers.

One of the most attractive features of the R3 is the Formant Motion function. You can assign predetermined motions to a number of parameters, from modulation to effect level to cutoff to pitch. But more on that later.

A Huge Range of Sounds

The R3’s default 128 patches already feature some dynamic sounds. But if you dig into the parameters menu, you can get a lot of variation.

Each timbre has two independent oscillators, which can be tweaked independently and mixed in any combination. Each oscillator can be set to a different waveform, which includes simulations of real instruments like organ, piano, or guitar. Of course, there’s the standard attack/decay/sustain/release envelope that makes up the base of almost all synthesizer sounds, but there is also a deep virtual patch bay that I have never once actually dug into myself.

There are four knobs that can be assigned to any parameter, as well as the tonewheel and optional footswitch, so you can edit them in real-time while performing.

In addition to the standard MIDI in, out, and thru jacks, the Korg R3 also has a USB output which allows you to connect to a computer or tablet. You can use this to turn the R3 into a MIDI control to software synths.

But the real value of the USB output is the R3 Sound Editor program. This program allows you to edit and save new patches on your computer, which gives you a near unlimited number of patches. I have a number of banks saved on my computer that I switch between depending on what project I’m using the synth in.

There are also a few forums online where fellow R3 users share patches that they have created. I’ve even found a few 128-patch libraries for sale on eBay. Most of my favorite sounds are patches that I downloaded from other users and then edited for my purposes. But since the R3 is so underappreciated, these collections are rather limited.

No Sequencer? No Problem

One of the biggest complaints of the R3 is that it doesn’t have an onboard sequencer. But I’ve found a few workarounds.

First, there’s the arpeggiator, which has six modes (up, down, two alternating modes, trigger, and random), a latch function, and subtractive rhythms. The arpeggiator also has a resolution control, which allows you to set how much time each note gets (eighth notes, triplets, two measures per note, etc). I will often use the arpeggiator to create a looping melody or a droning chord that will play until I turn it off. This video from my band shows what I’m talking about (excuse the shameless plug).

And then, there’s the Formant Motion control, which I mentioned earlier.

The Formant Motion section allows you to set as many as 16 steps, including the resolution of each step. You can adjust the settings of a number of parameters for each step, including pitch. So if you set a droning chord with a long formant motion resolution, you can set the Formant Motion parameters to match the tone and rhythm of a chord progression. Or, you can line up the arpeggiator and formant motion so that the arpeggiator’s melody matches the rest of the song.

It’s very limited compared to a dedicated sequencer, but it does open up a world of possibilities that many synths—such as the microKORG—can’t access.

So why doesn’t the R3 get the love it deserves? Why did Korg discontinue it after such a short production cycle?

As far as I can tell, most of the discontentment with the R3 has to do with the scrolling LCD menu. There are over fifty pages of parameters to scroll through, and that can get frustrating when you’re trying to dial in that perfect sound. Most synthesizer enthusiasts are big on real-time control, and while the R3 has an immense capability for customization, it’s difficult to do that on the fly. If its controls were routed out to a knobby front panel (like the Radias, for instance), I wager that the R3 would be one of the most celebrated items in the Korg catalog.