My weeks are filled with meetings. In addition to various weekly meetings with my staff, with students becoming bar or bat mitzvah, and with my various boards, I have numerous meetings each week connected to upcoming weddings and funerals. The Royole RoWrite is a notepad for the digital age, and it is my new best “work-friend.” Reasonably priced, it works. 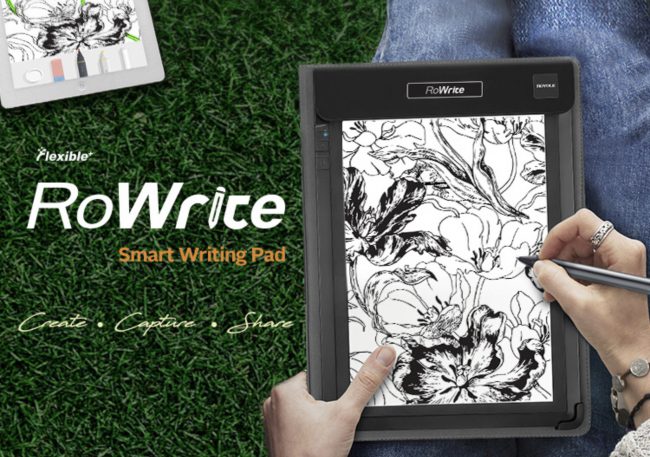 Take notes using pad and paper during meetings certainly works but, since, for example, weddings often take place six months to a year prior to the actual event, when the time comes for me to need notes I’ve taken I often find myself scrambling to locate them. Over the years I’ve tried a variety of different approaches in order to digitize this process and make it “Dan-proof.” Sadly, none have worked as well as I would like and I usually am back using pen and paper within a few months. For example, a few years ago I used a Livescribe pen. It allowed me to take paper and ink notes but also captured those notes digitally and transferred them to my computer, smartphone or iPad. It worked but there were a few problems with this approach. First, the Livescribe pen houses an optical sensor that tracks the notes as I took them. That meant the pen was more akin to a thick magic marker than an actual pen or pencil. Some people like a thick pen but it simply wasn’t comfortable in my hand. In addition, in order to use the Livescribe pen, I needed to have special paper, pads, and notebooks. They were expensive and, if I had the pen but didn’t have the proper pad, it simply didn’t work. The same went in reverse. If I had a Livescribe pad but left the pen at home, or found it wasn’t charged, I was also left doing things “the old-fashioned way.”

When the iPad Pro first appeared on the scene, I was excited. It allowed me to use an Apple pencil (a significant additional expense after spending a small fortune on the tablet) to take notes on the iPad’s screen. It worked, but while I tried a variety of different notetaking apps it never felt quite right. Writing with a pencil on a screen may sound good in theory but it is nowhere near as comfortable as writing with pen and paper. Within a relatively short amount of time, I found myself returning to traditional paper and pen and then, when the meeting was done, simply took photographs of those notes. (When I remembered to do so, of course.) 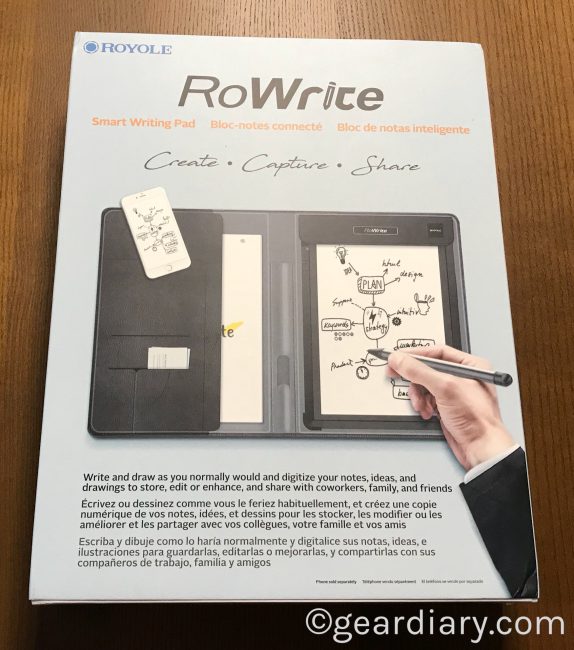 When I was approached about reviewing the RoWrite I was excited. This relatively inexpensive gadget (it’s under $130 for the entire system) allows me to take notes in a traditional pen and paper mode while also digitizing the notes and transferring them to my iPhone or my iPad. Sure, in order to make use of the system, I need their specialized paper, pen, and clipboard but the combination quickly felt so natural that I didn’t mind carrying them during my workday.

So let’s take a closer look at the RoWrite and explore why, if you spend a lot of time taking meeting notes, it might be a great solution for you. 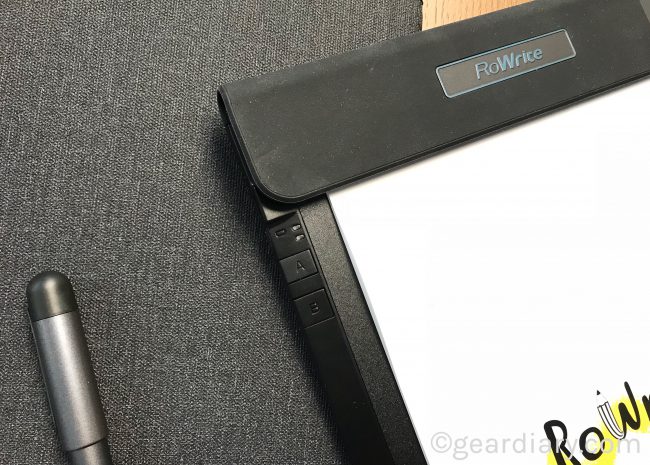 The company describes the product this way:

RoWrite brings the traditional notepad into the digital age to capture ideas, notes, and drawings. Edit, enhance, and even erase your creations after they’re saved or in real time, when connected to an iOS or android device with the free right application. Share your work, even video of it, with coworkers, family and friends. The kit includes an elegant, functional folio to protect your right device and a pen.

The system has three main parts. 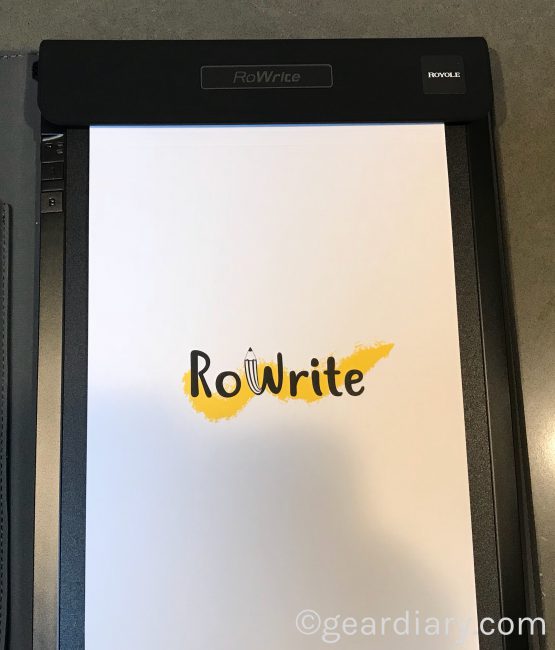 There is the RoWrite device itself. The RoWrite looks like a traditional clipboard, but it has some serious electronic magic inside. 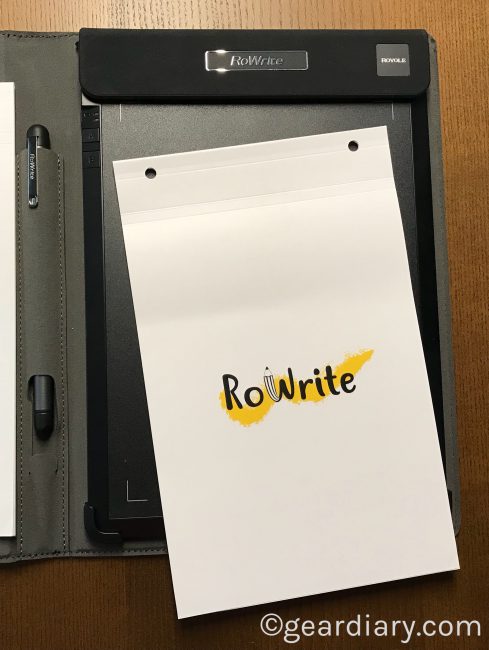 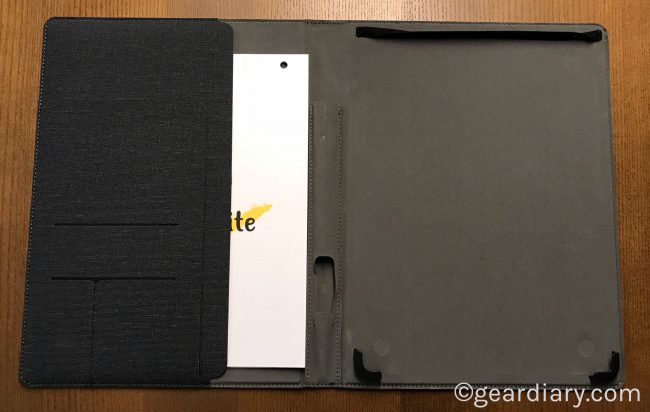 There’s the RoWrite pen. The device pen looks and feels like a traditional ballpoint pen. It is a regular pen but the electronics inside work in tandem with the clipboard to track the movement of the pen while taking notes. 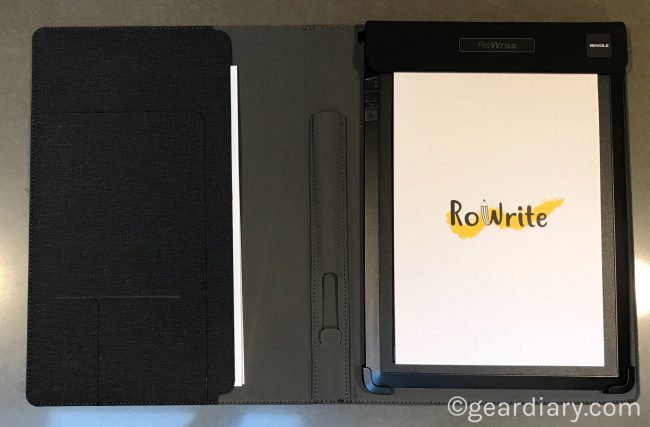 Finally, there’s a functional, albeit not what I would consider elegant, folio. It holds the clipboard, the pen, some additional pads of paper and can even store receipts of scraps of paper with notes.

In the box, you get the folio, a pen, a few notepads, and a replacement ink cartridge. When I first received the review sample, the company site didn’t include the option to purchase additional pens, notepads or ink cartridges but that has since been remedied, and replacements are available for purchase. 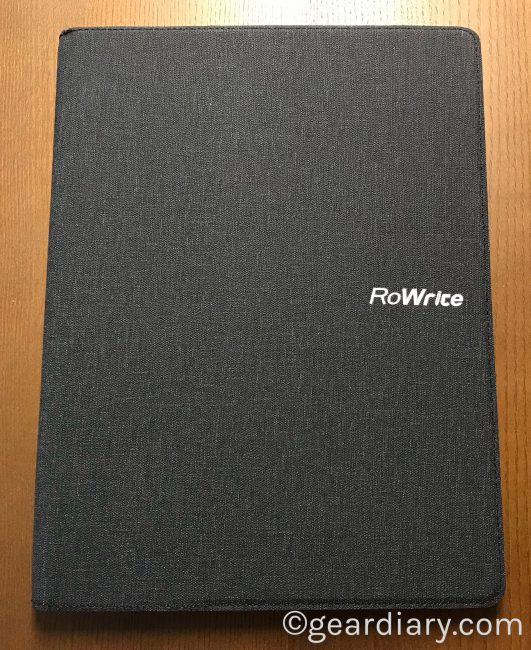 When the folio is closed, the system looks like a typical folio that accepts standard notepads. And while it certainly weighs more than a pad of paper and folio, it isn’t so heavy as to be uncomfortable to hold.

Opening the folio reveals the electronic clipboard on the right and pockets for additional pads of paper as well as some slots for business cards or receipts on the right. A “garage” for the pen sits along the spine of the folio. 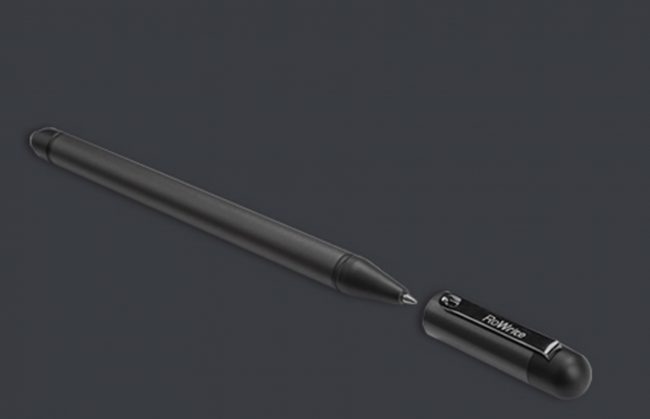 As noted, the pen looks similar to a standard ballpoint pen, but it has sophisticated electronics inside. It accepts the same, standard D1 cartridge that many ballpoint pens take so you can easily refill the pen if you do a lot of writing. It captures 2048 different pressure levels and, as the company notes, “delivers a comfortable, smooth and accurate rating experience.” (In general, I prefer a rollerball to a ballpoint pen, but this certainly is as comfortable an experience as I tend to have with traditional ballpoint pens.) 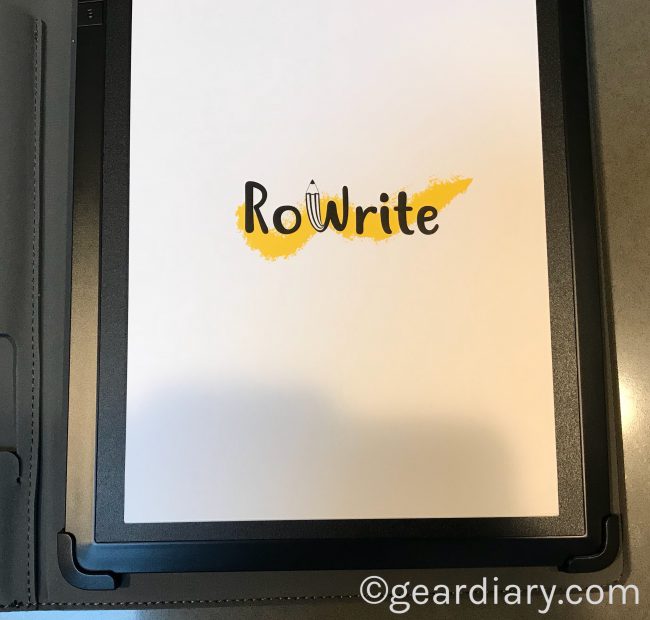 The clipboard sits inside the folio thanks to corner anchors on the lower left and right-hand side and a strip of elastic at the top. There’s a magnetic flap along the upper portion that, when lifted, reviews a unique system that holds the notepad in place and prevents it from moving while you write. 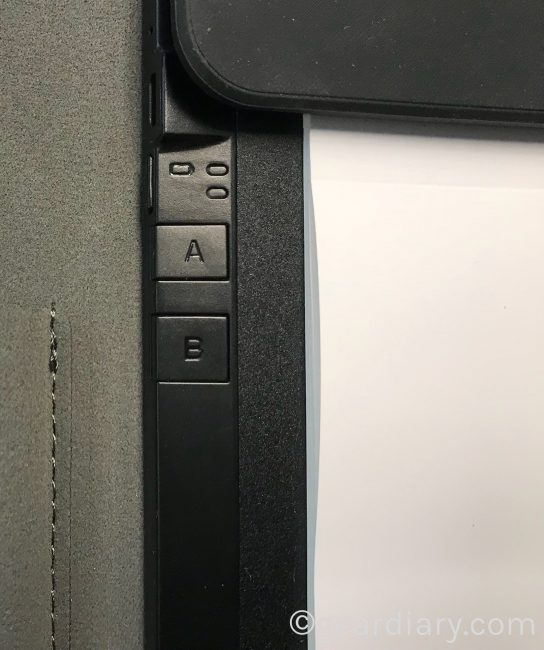 Along the side of the clipboard is a charging port that excepts a micro USB cable, and on-off switch, and two buttons. 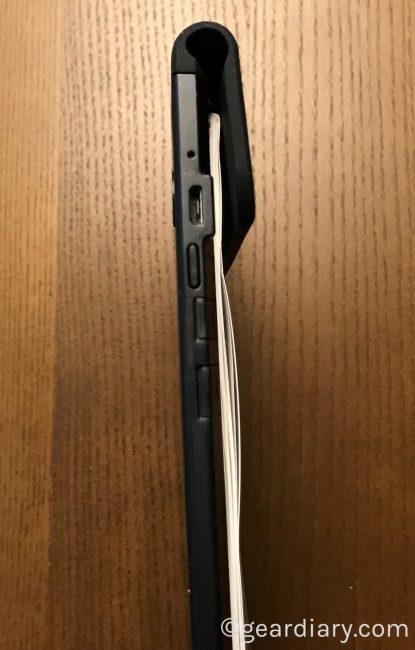 The top button is marked A while the bottom button is marked B. These are used to advance the page as you are writing so that the digitized version of the notes is as organized as the various pages you take in the notebook.

You can lift the flap, release the elastic and, if you prefer, simply use the “clipboard” on its own. This approach certainly makes the device lighter, but it means the RoWrite is unprotected.

You can certainly use the included pen or any standard pen to take handwritten notes the way you would under normal conditions, but if you use the included digitizer pen, and turn on the RoWrite clipboard on something special happens. 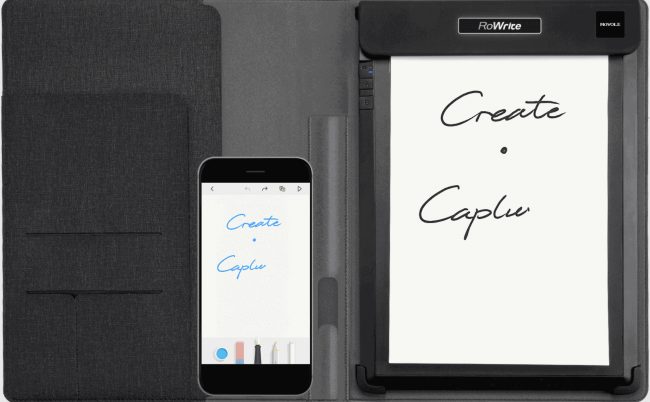 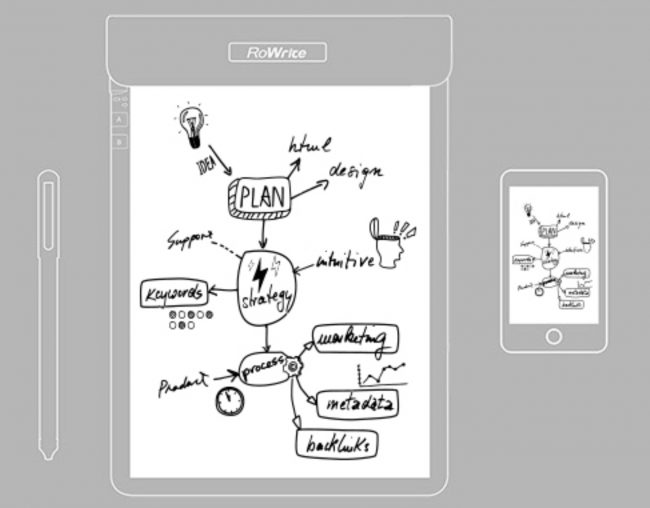 One of my biggest concerns was my worry that the notes I took would be lost if the device isn’t actively paired with your phone or tablet. Thankfully, as noted, that isn’t of concern.

If you use the system to take electronic notes, it records everything you do within the device and then, when you connected to your phone or tablet at a later date, all of your notes are transferred to the device. This kind of redundancy, having notes in ink and on your device, gives me great confidence in the system.

Add in the fact that the app can be paired with a number of cloud services such as DropBox and I’m pretty comfortable using this as my trusted system. 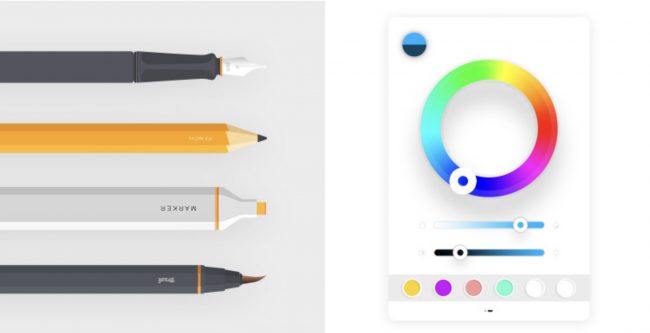 Finally, there’s also the option to enhance the notes or image you have created. This is done by choosing different writing instruments in the RoWrite application. It lets you change the thickness of each stroke, change the opacity of the “ink” and more. You can add up to 81 different preset colors or even create your own color “ink”. Finally, if you change your mind after taking a note, you can erase lines digitally so that what is on the paper doesn’t appear on your device. This allows your digitized notes to be clearer, better organized and more easily referenced than paper notes.

Also, the application records a video of every stroke you make while you are writing or drawing. This can be reviewed at a later date or, if you prefer, you can share the video as an MP4.

I wasn’t sure I was going to like this approach to writing, but I find that it allows me to function as I normally do but to keep all of my notes digitally in a single place and, when I need to, share them with a few taps on the screen. In other words, the RoWrite doesn’t make me change my note-taking behavior while still allowing for a far more powerful note-taking experience. I love this device and have ordered additional notepads so I can use it far into the future. You can check it out here.

What I Like: Works well; Doesn’t require you to change your behavior; Pen is thin and comfortable to hold and use; Let’s you take notes anywhere and then, at a later date, transfer them to the RoWrite app and share via a selection of cloud services

What Needs Improvement: The RoWrite “clipboard” and folio weigh a fair amount and may not make everyone happy. The good news it, you can pull the “clipboard” out of the folio and use it on its own if you need something lighter