Everyone knows that kids love ride-on toys, and Kid Trax is raising the bar with their innovative, lifelike electric replicas. Kid Trax was kind enough to send us their CAT Mining Dump Truck, and our kids are absolutely obsessed. With two seats and a max weight of 130 pounds, two kids can ride at the same time! 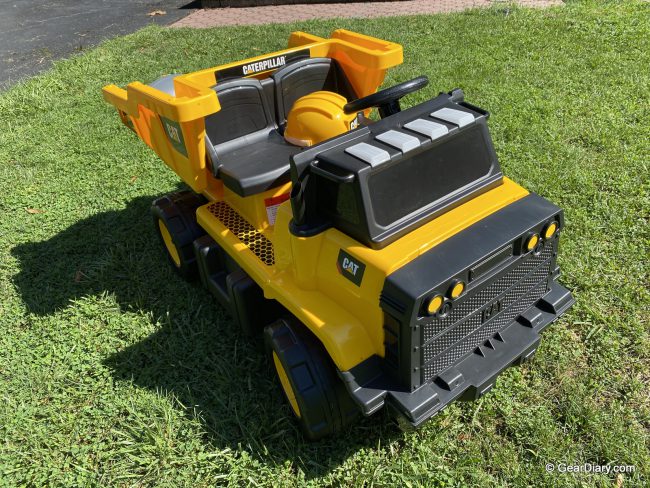 Kid Trax’s CAT Mining Dump Truck is packed with awesome features that bring the electric ride-ons I had as a kid to shame. The Mining Dump Truck is made for kids aged 3-7, which is perfect for us because my kids are 3 and 6. The max recommended weight is 130 pounds, and my kids have been able to ride together in it with no problem whatsoever.

The truck is designed like an authentic Caterpillar vehicle with the yellow and black color scheme and working dump truck bed. The truck also comes with two plastic boulders and a plastic CAT hard hat for pretend play. There are four cab lights located on top of the truck that light up when in use, and while they aren’t visible in bright daylight, they definitely add to the aesthetic when it gets closer to evening. 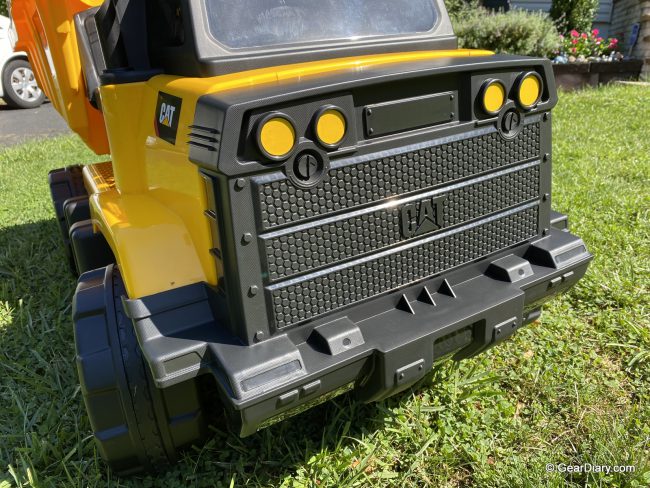 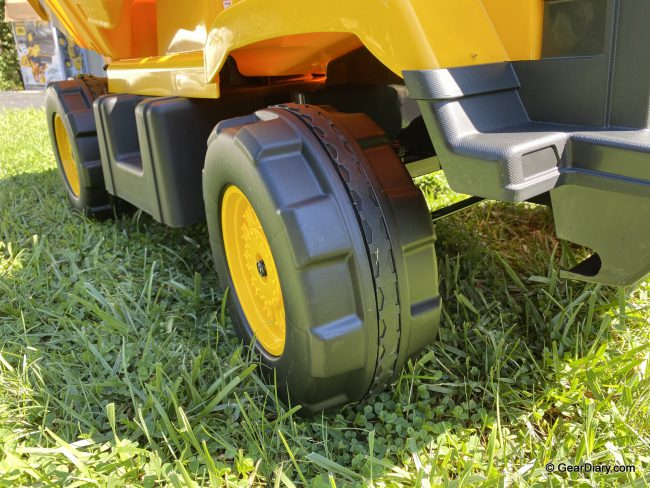 On the steering wheel, there are three buttons that trigger construction-themed sound effects as well as a microphone and loudspeaker that’s designed like a CB radio. My kids have had a ton of fun pretending to be construction workers communicating with one another. There is a foot pedal to hit the gas and a lever with which you can select from the two forward speeds and one reverse speed. The slow forward speed is 2.5 mph, while the fast forward speed is 5 mph. It took us a while to figure out, but you have to remove a set screw in the gear shifter to unlock the high-speed option. 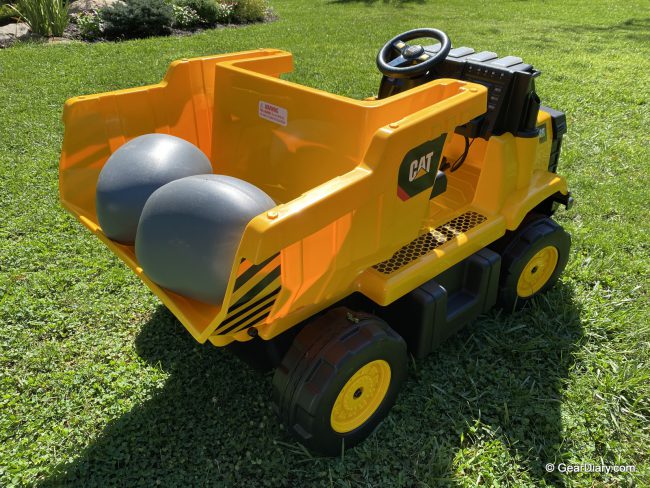 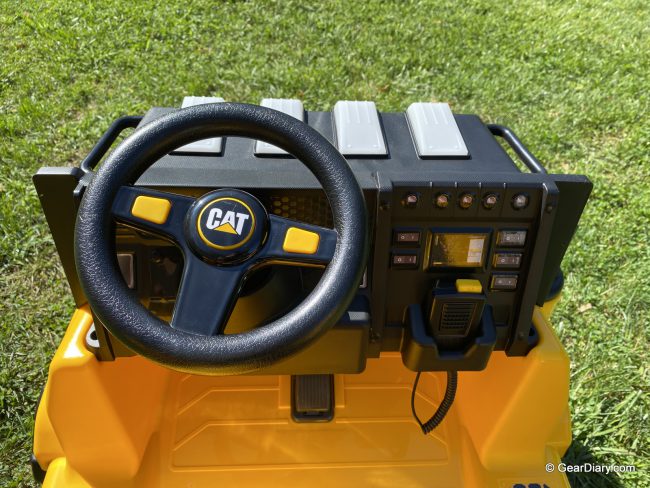 The plastic tires come with rubber Power Trax traction strips that offer much-improved traction and less noise as compared to similar vehicles from other brands. We live on a small hill, and the traction is definitely noticeable while going up the hill; I’m not sure a standard plastic tire would have the traction required to get up. The dump truck comes with a 12-volt rechargeable battery that’s pre-installed inside the front of the truck. The battery compartment is accessed by turning two quarter-turn screws on the front and pulling the hood down. 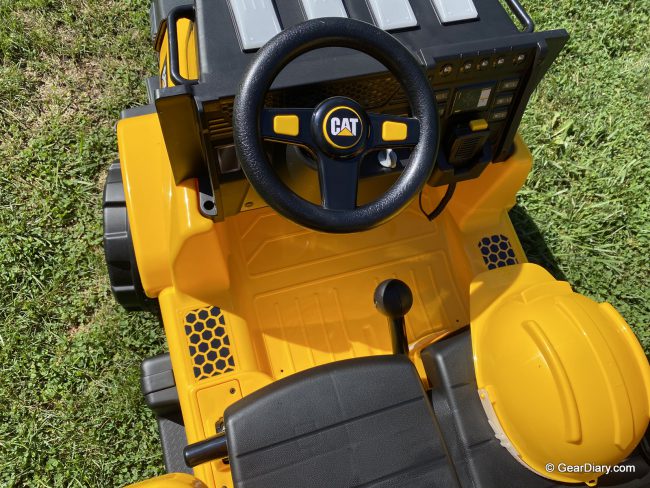 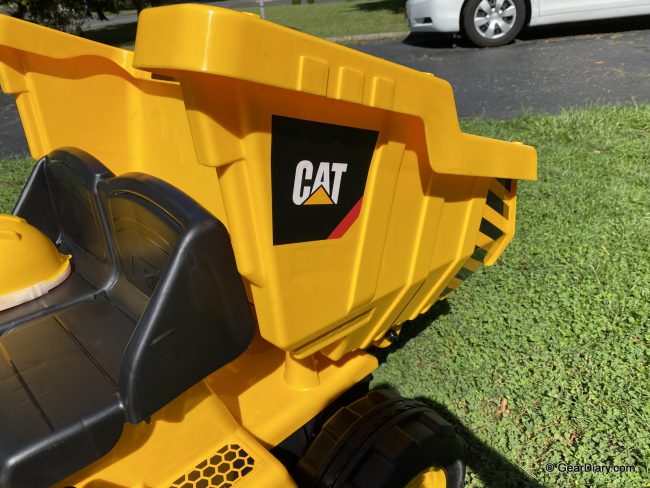 Assembly was pretty easy, though I made it hard on myself by dropping a couple of the nuts into the grass, and it took some time to find them. All of the stickers on the dashboard were pre-installed, which was nice. You just have to install the wheels using the included hardware and tools and then charge the battery for 18 hours. Those 18 hours were a loooong wait for the kids. As I mentioned, it took us a little while to figure out was that you have to take a screw out of the shifter to unlock the high-speed option.

While it’s hard to find any significant faults with the Kid Trax CAT Mining Dump truck, I’ll mention some of the small things we noticed. From a kid’s perspective, I think it’s a perfect toy. But from the adult’s perspective, there are some minor downsides. First, it would be nice if the battery came out of the front compartment more easily, which would simplify charging so we could bring the battery inside. As is, we leave the truck outside while charging, leaving it open to the elements if it starts raining. It looks like you can remove the battery, but you have to remove two thumbscrews to do so. Second, there are no seat belts. While it’s likely not a huge deal, we would feel more comfortable if something was holding the kids in their seats. 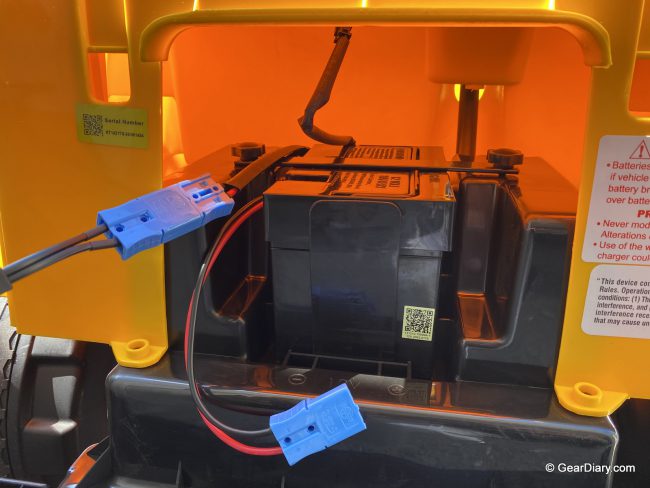 A look under the hood

My kids and I are incredibly impressed with the Kid Trax CAT Mining Dump Truck. It’s very well designed to look and feel like a real construction vehicle, including lights and sounds. The working dump bed is a nice touch, as well. The 12V battery does a great job powering the truck while holding two kids, and the wheels featuring Power Trax rubber traction strips make for a more quiet ride with much-improved traction. Our kids ask to play in the truck every single day, so I’d say that’s a good sign, yeah?

What Needs Improvement: Seat belts would be an excellent addition