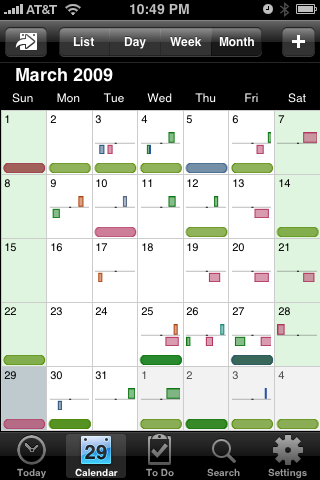 I’ve always been a planner kind of girl.  When I was in school, my day planner was always bursting at the seams with dates to remember, assignments, lists, post-its, and notes.  I really liked having a central place for all the important “stuff” in my life that I needed to keep track of.  However, as technology advanced into the 21st century, I turned to digital organization…and I discovered Pocket Informant.

Over the years, I have used Pocket Informant on almost every mobile device I’ve owned, from my Casio EM-500 to my Dell Axim to my i-mate JAQ3 (won in a Gear Diary contest, no less!).  I have relied on it to keep me sane through client deadlines, an impossible wedding to-do list, and countless tasks and appointments.  When I decided to make the switch from Windows Mobile to the iPhone 3G, I was worried that I wouldn’t be able to find a comparable app to keep me organized.  My fears were set to rest when I heard that WebIS was planning on making a version of Pocket Informant for the iPhone and iPod Touch, which was finally released in the App Store last week.

Pocket Informant features a much more robust calendar than the one that comes with the iPhone OS.  It currently features two-way sync with Google Calendar, which I LOVE.  GCal has been a great tool for me.  I initially started using it merely as a sync conduit between my Outlook calendar at work and my phone, but I started using it a lot more once I had it all set up.  I’ve come to rely on being able to get to my calendar no matter where I am.  Sync was easy and fast once I input my Google credentials, and I have had very few issues with it. 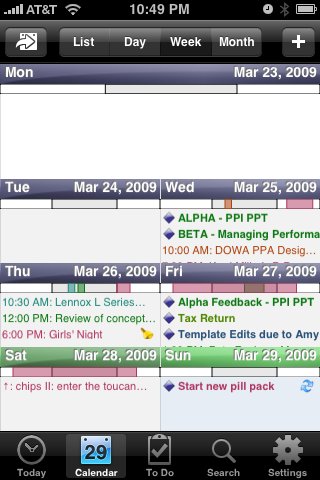 Once your appointments are all synced up, you can view your calendar in a variety of ways–a today view that shows you the appointments and tasks for the day, a single day view broken out into hours, a week-at-a-glance view, a month view, and an agenda “list” view that shows all upcoming appointments in chronological order.  Appointments also feature notes and the ability to set recurrence, alarms, and attendees for appointments.  You can also assign appointments to different calendars, which is really handy for me considering how I have my Google Calendar set up.

Different calendars are assigned different colors, which makes it really easy to see what’s going on on your calendar at a glance.  I prefer the week view, the today view, and the agenda view when I’m looking at my calendars–the daily view is not very helpful, and the month view doesn’t really let you see any details.  What I really like about the today view is that it shows both appointments and tasks.  A similar view is shown when you tap on an individual day header in the week view. 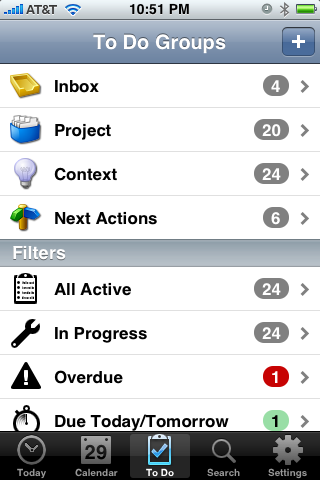 What I’ve been REALLY impressed with is the implementation of tasks in Pocket Informant.  Tasks sync with the web to-do service Toodledo, which offers both free and paid accounts.  When I heard that PI would be working with Toodledo, I signed up for the free account and got it all set up.  At first it seemed less intuitive than Remember the Milk, which I have been using for about a year.  However, once I got into Toodledo I discovered that I liked it a lot more for the task setup I prefer to use.  Like GCal, Toodledo syncs seamlessly with Pocket Informant.

Pocket Informant has two different task “modes” you can use–the Franklin Covey task approach, and the Getting Things Done approach.  I use the GTD setup because that is how I like to structure my tasks.  You can sort tasks by inbox, context, project, due date, and next actions; additionally, you can filter tasks to show only active tasks, those in progress, completed, or overdue.

After a week with the software, I must say that I am very happy with it.  I have missed having a decent calendar app on my iPhone–it has been the one thing that was missing from the wonderful experience I’ve had with the phone.  The team at WebIS worked long and hard to come out with an app that they felt would be worthy, and even though I got impatient waiting for it, I’m glad they took their time.

That’s not to say that Pocket Informant is without its issues.  WebIS is already working on a 1.01 update that takes care of a large handful of issues that were reported after the 1.0 release, including slow performance and sync issues.  I think the biggest complaints from others right now have to do with syncing.  Some people are unhappy that the software does not sync directly with Outlook or iCal.  I can understand that people are upset, but many of them are failing to consider the bigger picture.  They couldn’t just port the Windows Mobile version over to the iPhone–they had to build it from the ground up.  That means that everything has to be built from scratch, including syncing.  Not being able to access the native calendar database on the iPhone OS makes it difficult to develop, which means that 3rd party syncing will have to suffice until they are able to write their own code to sync things like iCal and Outlook.  I personally don’t find it to be an issue, because I have Outlook on my PC at work syncing to Google Calendar already, thanks to SyncMyCal.  🙂

The iPhone version of Pocket Informant also lacks some of the features I really liked in the Windows Mobile version, especially notes, links, and contacts.  I’m not sure that contacts will be built into the app at all, considering that the iPhone does a pretty good job of handling them on its own, but I am hoping the other features are forthcoming.  In the WM version of Pocket Informant, I liked being able to make a note and link it to a task or appointment, or creating an appointment directly from a task.

I sent in a couple of bug reports along with my sync log just to try and be helpful–I ran into some small issues when I was first getting started (nothing that really affected my use of the software) but I wanted the developers to be aware of what I was experiencing so it could be fixed.  Since I reported my issues, they have all but resolved themselves.  I have experienced slow performance only once or twice.  The only thing that is really annoying to me is that some of my calendar colors in Google Calendar will change after Pocket Informant syncs with it.  It’s an easy thing to change back, and it’s one of the things that the 1.01 update will take care of.  I must say, for a 1.0 release I have surprisingly few complaints!  I am looking forward to the 1.01 release, which will hopefully hit the App Store in the next week or so.

Pocket Informant 1.0 for iPhone and iPod Touch (2.2 and up) is available directly from the iTunes App Store

What I Like: More robust than the built-in Calendar, seamless sync and integration with popular cloud apps, great task management, multiple calendar views, great support of the product

What Needs Improvement: Sync and performance issues need to be ironed out, could have better recurrence settings, calendar color issues, lacks some features of other platform versions (contacts, notes, links, etc.)

Kizik Shoes Review: Quite Possibly the Most Comfortable and Easy to Wear Shoes Ever!

The Henson AL13 Razor Review: Good for Your Face and for the Environment

Nomad Base Station Hub Edition with Magnetic Alignment Review: An Elegant, Updated Charging Solution for up to 4 Devices