Posted By: Joel McLaughlin May 31, 2010
ShareTweet I grew up in the 80’s.  The 80’s was the decade of big hair, hair bands, break dancing and boom boxes.  Never have I seen a dock for iPhone and iPod that brings back memories from the 80’s like the Altec Lansing MIX iMT800.

The MIX has big boom box looks like no other dock I have seen.  In the 80’s, the middle portion of the boom box would have been dominated by a cassette deck.  Instead of a cassette deck, this one has port with a dock connector and an arm that slides up to take the iPhone or iPod out of the dock. There are also 2 big handles on either side of the dock. The top of the MIX has a handle, 2 inputs for devices other than iPod’s, an antenna for the FM radio, and a dock that holds the included remote control.  The combination volume and on button and controls for input, EQ, fast forward/next track and rewind/previous track are also located on the top.

They shipped the MIX with adapters for iPhone 3G/3GS, iPod Touch 1st and 2nd Generation and the latest generation Nano.  Again, iPod Video and iPod classic gets the short shrift with no included adapter.  This disregards the fact that the larger iPod’s can accommodate some beefy collections that even the biggest iPhone’s and iPod Touches can’t accommodate.  It would be nice if manufacturers don’t forget that the iPod Classic is still for sale and still around.  The good thing is the iPod Video I have still works fine without the adapter. The sides feature the two subwoofer speakers.  Be careful when lifting this from the sides.  In fact, I just use the top handle or the two front speakers so my hand’s won’t accidently go through one of the subs.  Would be nice if Altec Lansing included a little more protection for the subwoofer. The back of the MIX only has an input for the AC adapter.

The bottom has a panel where you can insert 8 size D batteries just like an old-fashioned boom box. Accessories in the box include a remote control, iPhone/iPod adapters and 2 cables for using the aux inputs.  This is a nice touch.  Many docks with aux inputs don’t include these.  I love that the MIX does. I covered what it looks like, but how does it function?  First, the sound of this dock is great.  The dock has very good bass response and can really thump pretty well for a dock.  The radio receiver sounds great on this dock.  I’ve also used my G1 with its dongle attached to one of the aux inputs and this worked really great while listening to streaming audio or the built-in Music app. The display on the front will show the title of the song or track playing on the iPod when using the iPod dock connector.  It does not show too much information while on either of the AUX inputs.  When in FM radio mode, it will display any RDS (Radio Data System) information that the radio station sends.  What shows up depends on the radio station, but my local station is nice enough to send the current song as well as the station call letters.

For those who have loaded Rockbox on their older iPods, I am happy to report that the dock connector will still work on this dock.  The tag information will not come through when using Rockbox nor will many of the remote control functions work, but at least it works!

Altec Lansing has come up with a great dock.  Any dad who likes to rock out 80’s style will love this dock.  I want to thank Altec Lansing for making my kitchen rock like it’s 1985.

The Altec Lansing MIX iMT800 is available on Amazon.com for $225.94 and free super saver shipping!

What needs improvement: Better protection for the sub woofer. 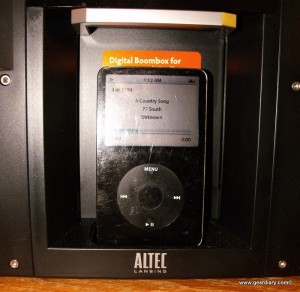 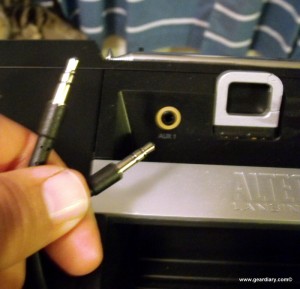