Two years ago, I left for CES carrying my iPhone and a Samsung Galaxy Tab. I thought I was packing efficiently because instead of bringing each device’s USB wall charger, I brought a single wall charger that had dual USB ports.

So of course it was on that trip, when I needed my gear the most, that I found out that just because a charger plugs into the wall and has two USB ports, it won’t necessarily be powerful enough to charge even one of your devices — especially when one of them is a tablet.

Since that fiasco, I hadn’t really bothered looking for another dual charger; when I travel for longer than a day or two, I bring the charging cable and plug for each device I am carrying. At home, each device either plugs into its own charger in the wall, or I’ll plug it into my MacBook Pro (which will power a tablet).

And then Kanex wrote, telling us about their DoubleUp Dual USB Charger for the iPad, iPhone, and iPod. My written reply was probably something along the lines of, “sure, I’d like to review this!” My unwritten reply was more along the lines of “Why yes, of course I would love to review your product! But don’t mind if I try it out at home before trusting it on a real trip, when whether it works or not will be crucial to my charging survival!” I needn’t have worried.

Hidden in the DoubleUp’s approximately 3.5″ tall x 2.5″ wide x 1.1″ thick black plastic exterior are two full-powered 2.1 amp/10.5 watt USB ports. That means that the DoubleUp can charge any USB chargeable mobile phone, phablet, or tablet out there from either or both of the ports at once; you supply the charging cable, and the DoubleUp does the rest. Because the DoubleUp was designed to be perfect for travel, the AC adapter folds into the charger’s body when it is not in use. There are two LED indicator lights built into the bottom corners of the charger; these LEDs will glow orange while the attached device is charging and green when charging is completed. This is a great feature for those times when you want to top off your device before dashing out the door. I’ve been using the DoubleUp at home, and I like that it allows me to power two devices at once with only one charger; even better, when I took the DoubleUp on our recent trip to Aruba, it performed like a champ. The Kanex DoubleUp will definitely be coming with me to CES in January.

The Kanex DoubleUp Dual USB Charger is available directly from the manufacturer; it comes in either black or white.

What I Like: Simultaneously charges two power-hungry phones, phablets or tablets; LED indicator lights let you know when your device is done charging; AC adapter prongs fold in for safe travel; 21 full watts of power means that you can charge two tablets at once

What Needs Improvement: Nothing — the DoubleUp works exactly as promised 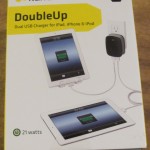 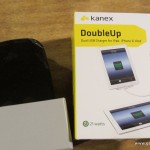 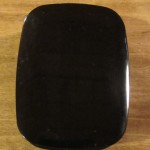 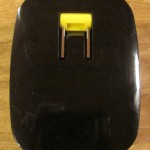 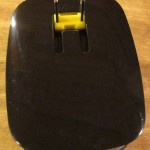 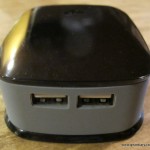 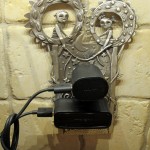 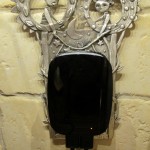