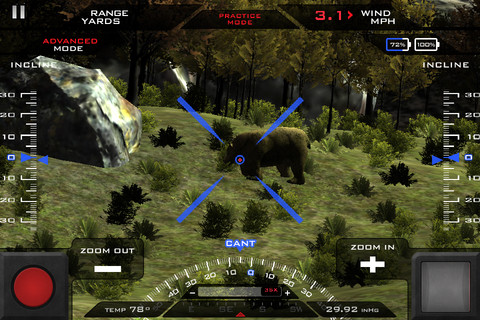 We first broke news of TrackingPoint and their Precision Guided Firearm system during this year’s CES. The system is a custom-built rifle and scope combination that makes long-range shooting much more accurate. Using the XactSystem, shooters tag, track and hit their target with pinpoint accuracy.

Users choose their quarry then enter a virtual world through the eyes of the HUD to practice extreme distance hunting skills. The virtual worlds are detailed and realistic with accurately scaled animals according to the distance. Aiming the system requires moving the device around just as would be done in a real world hunt and the HUD provides a full user experience of the TrackingPoint technology. I recommend going through the tutorial to learn the system. Basically, the hunter chooses the exact target which places a red dot on the animal. Then, holding the fire button, the gun will shoot when the aim is exactly over the indicated area. The tutorial will also explain the vitals of the game animals and how to execute an ethical shot placement. Each hunt has three animals to hunt and stats on duration and distances are provided. I have to admit, making a perfect shot on a bear at 589 yards is extremely enjoyable. While this game is a simulator for the Precision Guided Firearm system, it is also a fun hunting game.

You can download Precision Hunter Lite from the app store for free, and you can learn more about TrackingPoint at their official website.