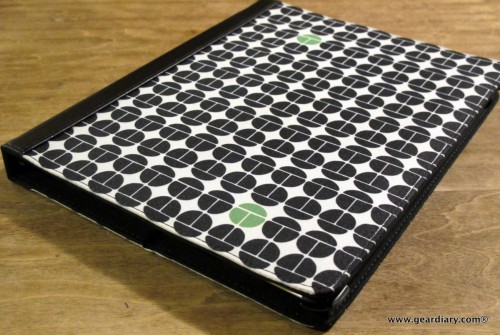 I recently reviewed the Trina Turk by M-Edge Macbook Case and iPhone 5 case; this Trina Turk iPad Cover rounds out the trio of accessories currently offered. The Trina Turk iPad case appears to be built on an M-Edge Revolve 360 Case chassis, which is smart because the Revolve 360 is a great case. As the name implies, the Revolve 360° allows you to rotate your iPad 360° when it is in the case, thanks to the unique plastic holster design that securely holds the iPad while protecting its corners. 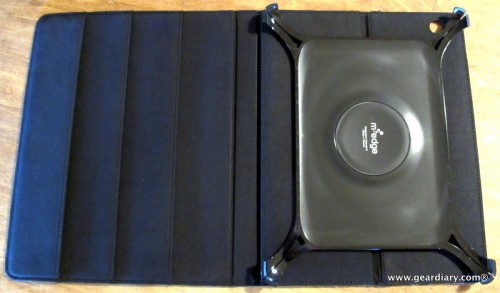 The iPad clicks into the four corner brackets, and once properly installed it’s difficult to dislodge. This is a good thing, as it will protect the iPad should it be dropped. This was proven for me the other day, as my mother has been using one of the two cases I was sent on her iPad 3. She sheepishly admitted that she’d dropped her iPad while it was in the case, and it had landed on its corner; I looked at her iPad and could see no damage at all!

The cover is composed of what feels like a thin sheet of ABS plastic with soft black microfiber on the side that will touch the iPad’s screen, and the exterior is covered in water and stain resistant printed satin (Scotchguard treated) with leather-like accents on the spine and back. 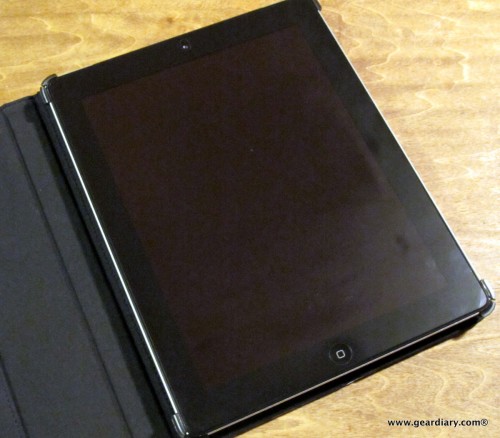 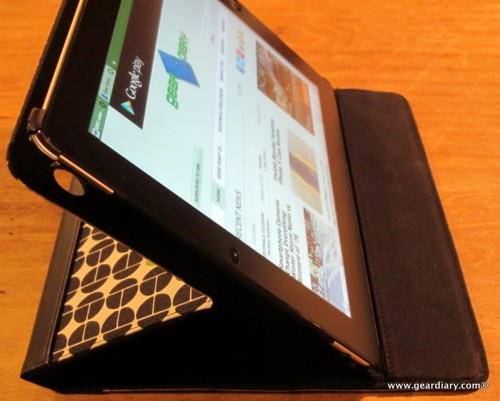 This cover is also great for reading, as the front cover will fold flat behind the iPad for easy handling. If I could find one thing to nitpick about, it would be that there is no fastening system for the cover. I would have really liked it if there were — for instance — a lime green Moleskin-style elastic strap that was attached to the back of the case, that could be stretched over the front edge of the cover to keep the flap secure. And okay, there is one other thing … the material on the front cover starts to wrinkle a little bit with use, almost like it wasn’t properly attached to the cover in the first place, and it has worked itself loose. I’m not sure if that is how it is supposed to be or if it is a design flaw, but it looks off to me. 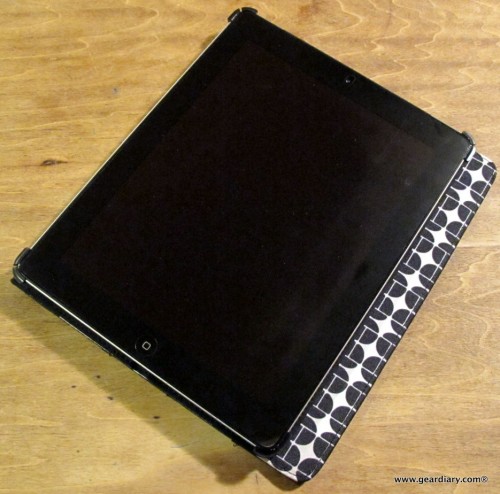 Like the other Trina Turk electronic accessories I’ve reviewed, the iPad cover is available in several designs. I was sent the Ladybug design and a southwest inspired Zigzag pattern; I prefer the Ladybug pattern, which is perfect because mom loved the Zigzag. If you’ve been looking for a fun and fashionable iPad cover that also offers great protection, you should take a look at the Trina Turk iPad Cover.

What Needs Improvement: An elastic closure band on the edge of the cover would be helpful; the material on the cover tends to wrinkle, which looks odd over time