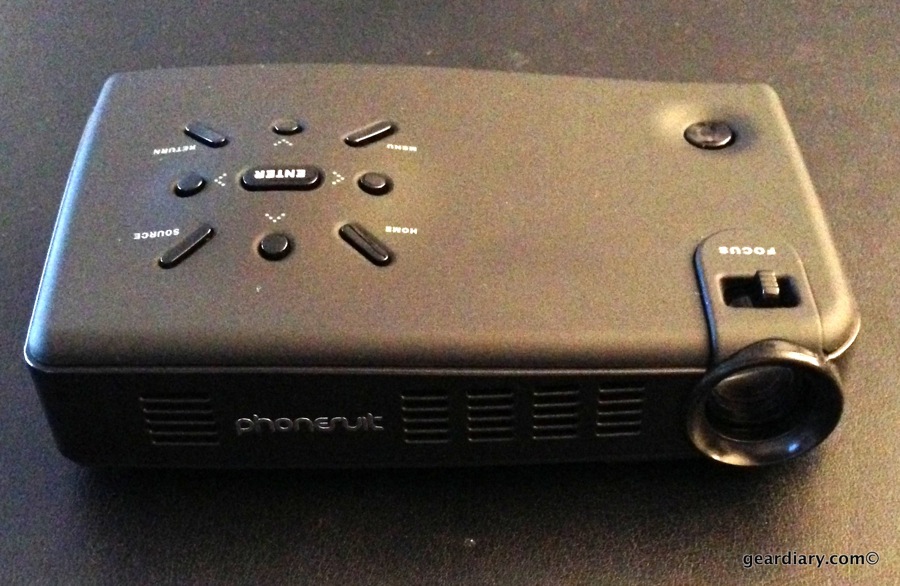 About here and a half ago, Judie and I used the BenQ GP2 Projector. We were amazed that something so small and light could push out such a large, clear image. Watch our videos…

Bringing the BenQ Joybee GP2 to Aruba? Why Not!

The BenQ GP2 is a terrific piece of technology that allows you to project whatever you want onto any wall you want and, in the process, turn that wall into a screen. I was more than happy to take it off Judie’s hands, and since then I have kept the Benq GP2 in my study at the synagogue. I’m glad I did, since last fall a group of my high school students were heading out on an overnight weekend retreat and needed a way to show movies late at night. They grabbed the Benq GP2 and threw it in the supply box. Later that night I received an email that simply read, “This thing is awesome!” It came in handy once again this past February, when I used it during our 10th grade overnight to show various song, television and movie clips. What makes the Benq GP2 so terrific is the fact that it is the smallest projector I have ever used, and it works exactly as promised.

Actually I need to correct that… 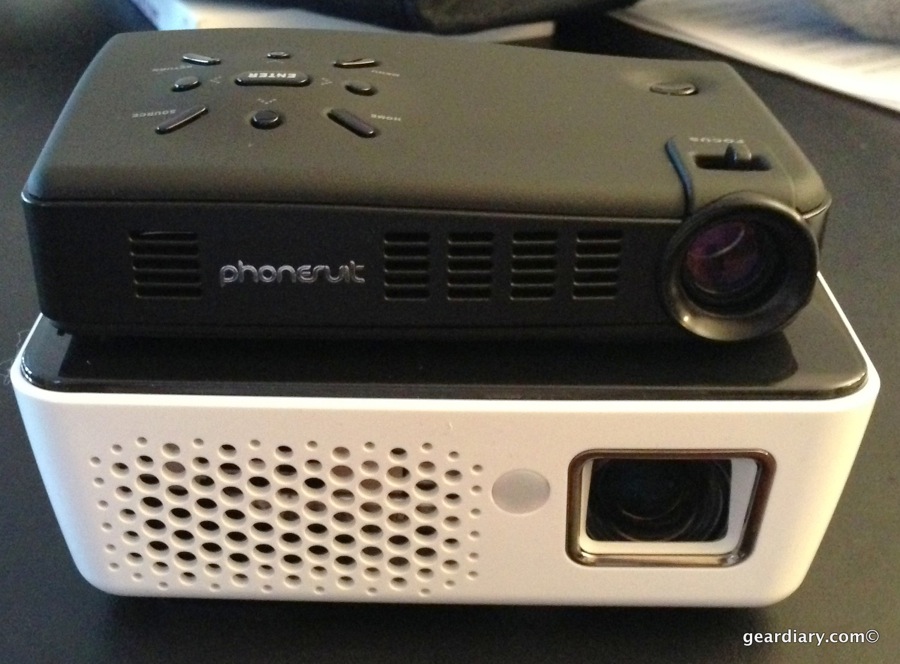 What MADE the Benq GP2 so terrific WAS the fact that it WAS the smallest projector I HAD ever used.

Yes, I’ve been reviewing a projector that makes the Benq GP2 look positively huge. The PhoneSuit Lightplay Media Projector is tiny. Let’s look at the relative size of the projector when put up against the earlier device.

As you can see in this series of pictures, there is no comparison when it comes to mobility.

The PhoneSuit Lightplay Media Projector actually fits in the palm of your hand, and yet it can throw and image on the wall that is the equivalent of an 80″ home theater. How small is it? The PhoneSuit Lightplay Media Projector is just 4.9″ long. It is just 2.9″ deep. And it is just 1.4″ high. In other words, it is about the size of three iPhone 5s stacked one on the other.

It is tiny. Here’s a video walkthrough of the PhoneSuit Lightplay.

Even while I was shooting the video, I was blown away by how small and light this device is!

The speaker, AV in, miniUSB, and HDMI connectivity mean you’ll be able to take your small smartphone and use it to project an image or video that a roomful of people can enjoy. That is reason enough to give the PhoneSuit Lightplay a serious look. Think about it … you connect your iPhone to something not much bigger than it, and before you know it your entire group can be watching a movie or enjoying your vacation slides. 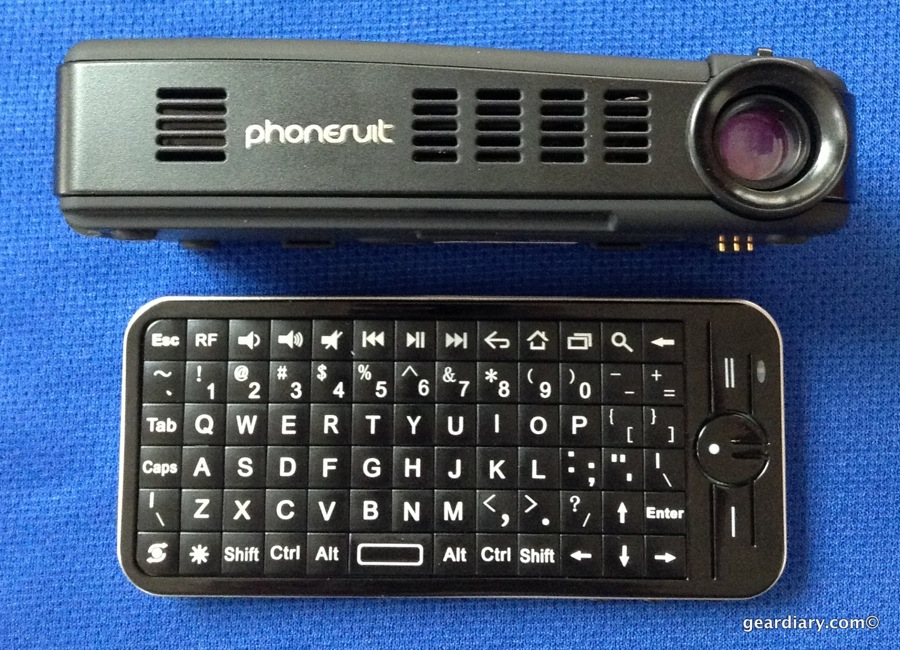 And that’s just the beginning. The PhoneSuit Lightplay isn’t just a Pico Projector, it is a Smart Pico Projector. Why is it “smart”? Simple, it has Android OS built right into it and ships with a special 2.4 Ghz wireless keyboard/controller. (The keyboard even serves as a 3 Axis Gyroscope Motion Control!) You read that right, the PhoneSuit Lightplay is a mobile computer with an 80″ screen.

The PhoneSuit Lightplay Media Projector is a mobile projector in the truest sense of the phrase. It’s something you can carry with you pretty much all the time and be ready to share your images or video with whom ever you want whenever you want.

In the package you will find the PhoneSuit Lightplay Media Projector, the keyboard and a USB dongle to connect the two, a tripod, a power cable and an AV cable. There’s also the power cable and some additional adapters. All of which are important since, in its simplest form, you’ll be taking images or video from a secondary device and passing them through the projector on the way to the wall or other flat surface. 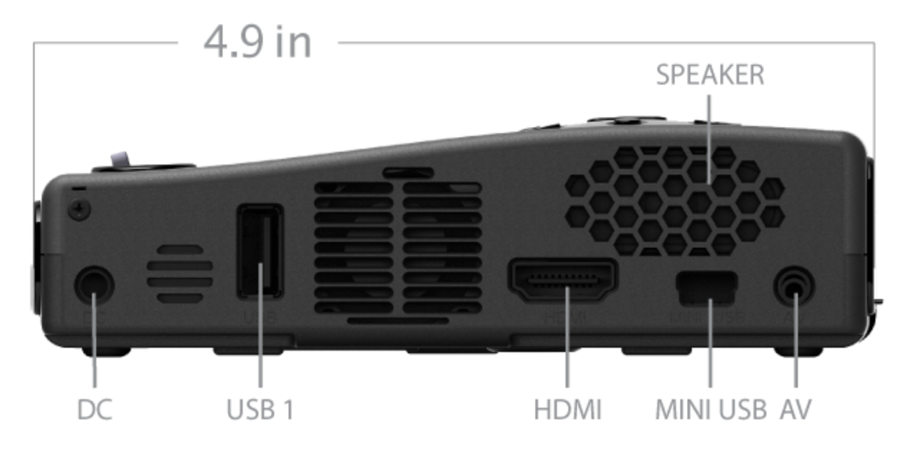 And despite the tiny size, the PhoneSuit Lightplay Media Projector packs a punch. It uses LCoS Projection Technology, offers a 1024×600 Native Resolution (it supports 1080p, 720p content), serves up 50 ANSI Lumens, has an RGB LED light source that will last for up to 30,000 hours of lifetime use. Just 4.9″ x 2.9″ x 1.4″ it will cast an image of up to 80″. It supports USB flash drives, hard drives and SD cards, has a built-in 2100mAh battery, comes with 8GB of built-in memory and serves up WiFi 802.11 b/g/n/. And while it is compatible with a wide range of smartphones and tablets the fact that it has Android OS built in means you won’t be dependent on a second device for your games, video and assorted other aspects of your mobile life.

All of this is great, but how does the PhoneSuit Lightplay Media Projector with Android work when used as a standard projector? And, perhaps more interestingly, how does it work as a stand-alone Android device?

That’s where we’ll pick this review up in Part 2 … coming soon.