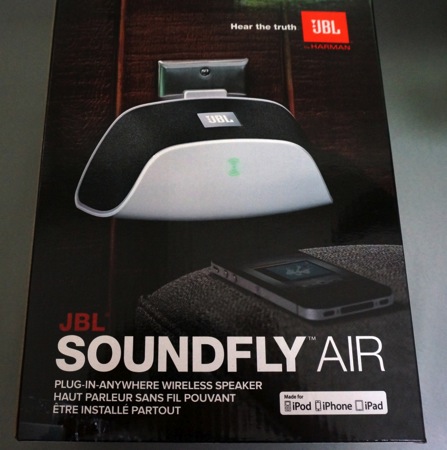 The other day I came home to find that our router was blown. For some that might not be a big deal, but for me it was no small issue since it meant no television, no phone service, and no internet connection; I was in my car and on the way to buy a new router within minutes. The new router cost me an unexpected $200, but I was up and running in no time.

Once I had everything working again, I discovered an added benefit — our WiFi network no longer faded and dropped the signal the way it previously had. Clearly my old router had been on the way out for some time. Having a solid WiFi signal was especially good when streaming music to our Libratone Zipp using Apple’s AirPlay and, as luck would have it, I had just received one of JBL’s SoundFly Air AirPlay speakers. The new router meant I could use and review the speaker without dealing with the previous limitations of our home network. 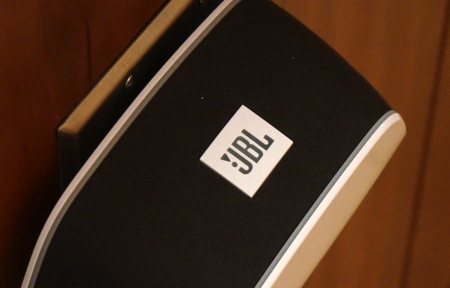 Unboxing the JBL SoundFly Air was a non-event. The packaging is simple and the box content was kept to a minimum. The speaker was wrapped in plastic and the plug, a US model inside mine, was separate; a thick Quick Setup Guide was also in the box. I would have preferred them to have simply sent me to their website to download the guide since it is there on the product page; this struck me as a bit wasteful. 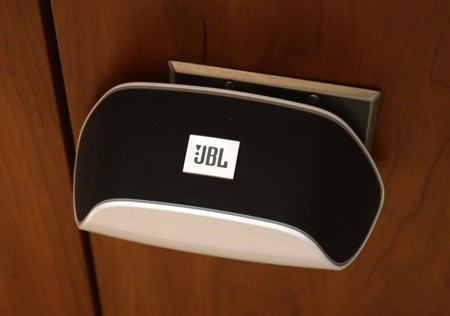 The simplicity of the SoundFly Air is one of its main attributes. Rather than having a long cord and needing to sit on a desk, counter or table, the speaker plugs directly into a wall outlet and sits there until you begin streaming music through it.

Like the speaker itself, setup is relatively simple — so long as you follow the instructions. You can set up the speaker using the buttons on it or by using the free JBL OnBeat app. The latter approach requires you to download the app, pull off the speaker grill, and connect your iOS device to the hidden USB port via a cable (not included). It looked simple enough, but I opted to do the setup by simply pushing the buttons on the speaker. 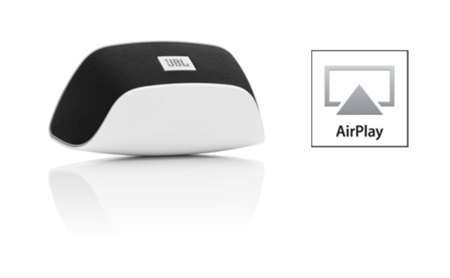 I plugged the JBL SoundFly Air in, touched the WiFi logo for three seconds and waited for it to alternatively flash green and amber. When it did, I went to my iOS device’s settings and looked for JBL SoundFly Network” under the WiFi network options. After connecting to the JBL SoundFly Network, I went to the browser on my iOS device — in this case my iPad — and entered the web address 192.168.1.1. That brought up the JBL Setup page. I selected my home network and entered my WiFi password. 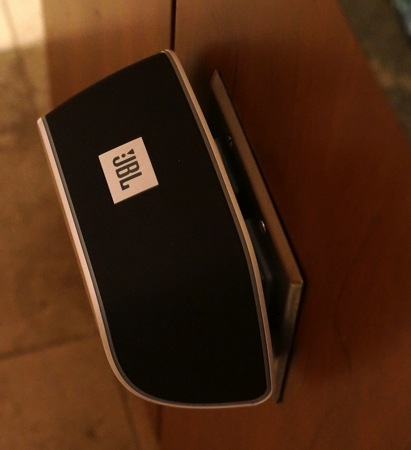 That done, the, SoundFly began to glow solid green a few seconds later. I went back to the settings on my iOS device and selected my home network once again. It all may sound complicated, but so long as you follow the instructions step by step it is actually both simple and quick. That’s a good thing, since I will have to redo the setup when I bring the speaker to our lake house in a few weeks. That’s another great feature of the SoundFly Air — it is easy to bring with you when you travel. So long as you have access to a WiFi network you will be good to go!

If you have ever used Apple’s AirPlay, using the JBL SoundFly Air will immediately be familiar. In your music player, lock screen or the application switcher dock that appears when you double tap the Home Button, you will see the music player option icon. Tap it and select the SoundFly Air. 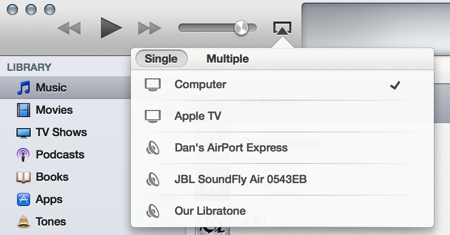 After a few seconds, the music will start flowing from your iOS device or, as the image above shows, iTunes on your computer. It couldn’t be simpler and, thanks to the way AirPlay works, so long as you are within your Wireless network the sound will continue. In other words, AirPlay isn’t automatically limited to the 33 foot range that is common when using Bluetooth. 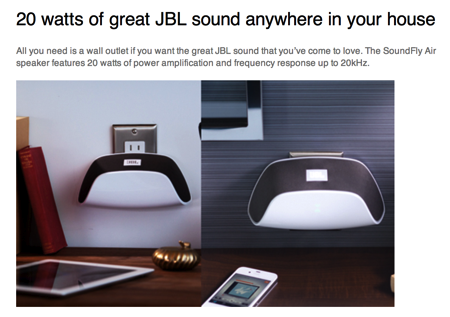 Like its Bluetooth sibling, the SoundFly Air plugs directly into a wall outlet. There it sits until you start streaming your music over AirPlay. And while the sound isn’t as rich nor the bass as full as much larger speakers like the Sonos PLAY:5 or Libratone Zipp, the SoundFly certainly sounds good. It is also far less expensive. Both the Zipp and the Play:5 come in at about $400 while the SoundFly has an MSRP of just $199.95.

The speaker can push out up to 20 watts of power and easily fill a small room. As the company notes, “Optimized compression technology (OCT) ensures clear, low-distortion sound at high output levels. Play your music loud, and OCT will reproduce it with sharp, accurate precision.” In layman’s terms, that simply means that when I had my iOS device pushed up to the loudest volume I didn’t hear a stitch of distortion; yes, this small speaker packs a punch.

The SoundFly Air has another trick up its sleeves. That trick goes by the descriptive name “AnyRoom audio”; AnyRoom Audio means you can sync up to four JBL SoundFly Air speakers. They can be in the same room or, optimally, in four different rooms where they can fill your home with sound. That means you can have a four room speaker system for under $800. That’s a good deal considering the ease of use and quality of sound. 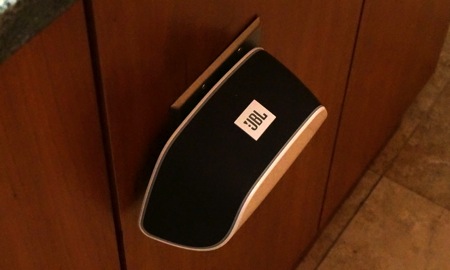 If you are looking for a simple AirPlay-enabled speaker, and don’t want cords running all over the place; if you have a strong, stable WiFi network, and you don’t want a large speaker on the desk or table becoming a room’s focal point, then you’ll want to check out the JBL SoundFly Air. It is a great little audio gadget, and it is the only one to pack such a unique design. For the price I don’t think this can be beat, and I would be more than happy to use this in pretty much any room.

You can learn more and check out the features of the JBL SoundFly Air on the product page.

What I Like: Small but powerful; Plugs right into wall outlet so there are no cords and it doesn’t take up desk or table space; Simple setup; Uses Apple’s AirPlay; Big, good sound from a small package (If you don’t have an Apple device, then you’ll to check out its Bluetooth-enabled sibling)

What Needs Improvement: Not the speaker for you if you love tons of bass; Only for Apple fans using iTunes and/or iOS devices