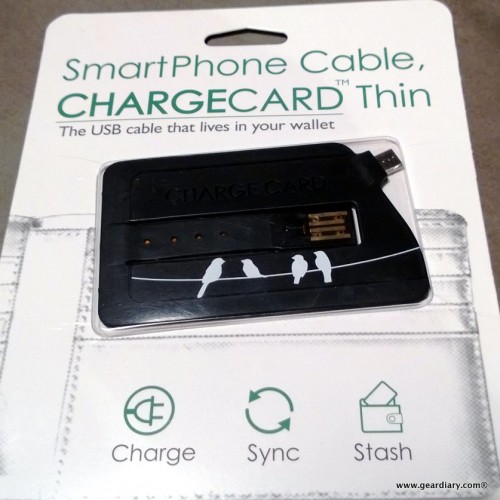 The ChargeCard for iPhone and Android

If you own a mobile phone, then you inevitably have needed to charge it when away from your desk or car. USB ports seem to be everywhere anymore, but not everyone wants to carry a loose Lightning or MicroUSB cable with them; the ChargeCard fits in your wallet or makeup bag, and it makes carrying an extra charger easy to do. Just stick it in and forget about it … until you need it.

Originally a Kickstarter project started in July 2012, the ChargeCard raised almost $162K after asking for $50K. Obviously there were plenty of people other than me who thought that carrying a spare charging cable with a credit card’s footprint was a great idea. I backed at the $30 level, and as often happens with Kickstarter projects, the estimated September 2012 delivery date was (more than) a bit off.

About two weeks ago, I received my special “birds on a wire” edition MicroUSB ChargeCard. Yeah, it stinks that I had to wait a whole year to get it, but I feel that it was worth the wait. People who order the MicroUSB and Apple 30-pin versions can get theirs fairly quickly, now. iPhone 5 ChargeCards are supposed to start shipping after July 30.

Because I wasn’t sure what was going to happen with Apple’s 30-pin and Lighting connector situation or what devices I might own that used either, I went with what I felt was the obvious choice at the time — the MicroUSB ChargeCard. 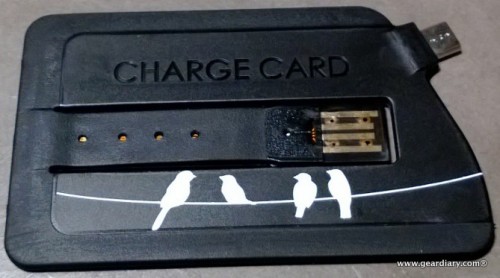 Which was fortuitous, because I am now using the AT&T HTC One Android Phone, and, as I mentioned,  the Lightning Charge Cards aren’t quite shipping.

The ChargeCard works well, and it’s one of those items that you may or may not use regularly, but you’ll be glad that you have it when you need it.

Of course the MicroUSB ChargeCard doesn’t only work with Android Phones; you can also use it with BlackBerry devices, Bluetooth headsets, mini stereo systems — anything that charges with a MicroUSB charger. Just be aware that the ChargeCard is best used with a laptop or other easily accessible USB port, because even when fully extended — at roughly 5″ long — it is relatively short and won’t allow the phone to lay very far from the charging spot. If you consider the ChargeCard to be your emergency charging solution rather than your primary charging solution, you’ll be using the right mindset, and the slight inconvenience of it not having a longer dongle won’t matter.

I don’t have the iPhone ChargeCard in the 30-pin or Lightning version, so I can’t say for sure, but I am guessing that they will also charge the iPads that correlate with those ports. I could be wrong, though; if you get one, you might want to make sure the manufacturer says it will work before using it.

The ChargeCard is available for Android (and other devices using a microUSB), iPhone 30-pin, and iPhone Lightning connectors; you can buy them directly from the manufacturer.

What I Like: Fits in a wallet and makes for a convenient way to carry a charging cable

What Needs Improvement: Nothing, as it is a great emergency or backup charging solution