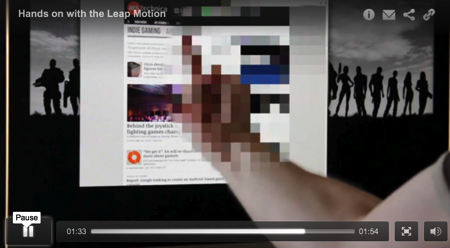 ARS Technica has a hands-on look at using the Leap Motion Controller. If you aren’t familiar with this device, which just began shipping this week, it is a small box that connects to your Mac and allows your hands to act as input devices for your computer. Now in and of itself, that isn’t so interesting. After all, it is your hands on a mouse or trackpad that currently allow you to input and control your computer. The difference here is that the Leap Motion Controller allows you to simply wave your hands in front of the screen and control what happens ON the screen. All this happens thanks to a nifty little aluminum box that sits in front of the computer and tracks the motions of your hands using infrared sensors. Think Minority Report, but using the computer you currently own and for just $79.

The Leap Motion Controller looks amazing, and I actually pre-ordered one. I had no doubt it was one of those tech purchases that would be fun for a brief while but eventually make its way into someone else’s hands or as a giveaway here on the site. Still, it LOOKED like the future of computing, and I wanted in on it.

Then I heard from a friend that his Leap Motion Controller had been delivered while we were traveling together this past week. I had heard nothing about my unit and was, admittedly, a bit jealous. Turns out the credit card I had used for the pre-order had expired, and I needed to update my records. After seeing ARS Technica’s demo video of the device I’m not so disappointed, and I have no intention of correcting the card information. Sure the $79 is a small price to pay for the future of technology, but despite early excitement using the device (“Look, I have robot hands…”), as the video concludes… maybe the future still needs a little (or more than a little) work.

Check the video out at Ars Technica