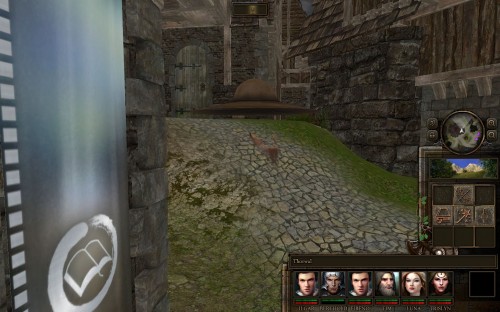 Every now and then a game comes along that is so special that you just have to pre-order it, to offer up money to make sure it happens … and then when it arrives it is such a bug-filled and unfinished mess that it is hard to even contemplate how someone ‘released’ it. Such is the case with Realms of Arkania – not the original game, which is an absolute classic released by Sir-Tech in 1993 (translated from German). I am talking about the just-released remake.

A legend reborn as Realms of Arkania: Blade of Destiny returns!

Developed by Austrian developer Crafty Studios, Realms of Arkania – Blade of Destiny is a faithful remake of the 1992 original, adored by a generation of Role Players and one of the most successful RPG’s of the 1990’s.

Old school RPG at its best – for the Fans of REAL RPG games.
Features:
Remake of the first part of Realms of Arkania
Roleplaygame with turn based tactical fights
Cities and dungeons in current real-time-3D
Dozens of talents, fighting skills and magical skills
Authentic realization of the TDE basic rules
Depending on your gaming style – 20 to 80 hours game time

The problem? The game as released is an absolute buggy mess that is nearly unplayable. My Mac version has been updated daily since Tuesday, and the image above is from the latest patch. It you look in the center of the screen you will see a disembodied hat and goatee. That is not an uncommon sight. Neither are phrases such as ‘let me tell you about %0, Ich bin sicher, dass Sie es interessant finden’. In other words, a mix of English, German, and missing placeholder text that was never filled in.

The original game had fun features like extensive skill sets and attributes, as well as hunger and thirst. Those are all there in the remake, but the skills lack any context or explanation – and some are in German. Worse still, on leveling up your character gets points to allocate – but in the original you didn’t always succeed at learning the new level of a skill. The remake does nothing to explain this so many think it is bugged. Finally, right now in many situations if your characters eat their hunger levels actually go UP! Yeah, serious bugs. Fortunately the ones that had save games trashed after combat and other show-stoppers have been fixed.

Right now the game is not something I would recommend to anyone – not even a fan of the original. It is unclear if it will ever be in a state to recommend to a newcomer to ‘The Dark Eye’ game system. But for now – stay away.

If you are still interested in checking out the game … head to Steam, but don’t say I didn’t warn you!