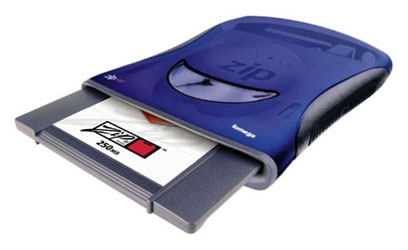 How much storage is enough? More! More than whatever number you were thinking – which is an order of magnitude more than what was possible a few years ago. I take a look back at the Iomega Zip Drive, the popular cheap and reliable storage device that bridged the time between floppy disks and USB flash storage.

The Iomega Zip Drive was originally introduced in 1994, started shipping in 1995, and died out about a decade ago — though I can’t find an exact termination date. I remember the release well, and I was right on board when it arrived. I wish I could find the original print ads showing a massive stack of floppies next to a single zip drive! I had been using the Iomega Bernoulli Box 44MB drive for a while, and it was a fantastic way to store all of my stuff. It was faster and more reliable than a floppy disk and held 40x the content of a floppy.

The Bernoulli drive used a ‘floating disk’ technology that spun the disks at a high rate and had the platters levitate and come in proximity to the fixed heads which read the data. This technique meant that in the event of a power failure the disks pulled away from the head, and there wouldn’t be a crash. In the late 1980s the combination of expensive hard disks and frequency of crashes made this technology extremely desirable.

The Zip drive used technology that combined elements of both hard drives and Bernoulli drives, but viewed from the current perspective has more in common with how hard drive technology has developed through the years. By using this hybrid technique, they were able to gain capacity and speed, and maintain reliability and lower price. It was a sweet spot of technology that lasted for about a half-decade before becoming quaint.

The original Zip 100 drive came in either parallel port (PC) or SCSI (Mac & Amiga) formats. Parallel ports were what PC printers used for communication, and were faster than basic serial ports but still very finicky about connections. SCSI was a tremendously fast parallel interface that allowed for daisy-chaining (connecting multiple devices) but was tremendously picky about ‘hot swapping’ (removing powered devices) and proper termination of the SCSI chain.

The Zip 250 pictured and in the video arrived in 1998, and aside from the higher capacity, it also signaled the move to USB – which is ironic because in 1998 SCSI was several times faster for data transfer than USB 1.1. There were SCSI, Parallel and USB versions of the Zip 250, but the one I bought was fully USB. The other cool thing – USB power. The Zip drive operated on low power, so it would use the power from the USB channel, and efficiently only spin up when needed.

The days of the Zip disk were numbered by the adoption of the USB 2.0 standard and the rapid drip in price of flash storage. Soon we had small ‘thumb drives’ with similar storage capacity, faster access, lower power drain, and no need for a separate drive. But for those of us who had them, the Zip remained useful until it was cheap enough to dump all of the contents of all of our disks onto a single small USB flash drive.

Here is my hands-on look at the Zip drive: