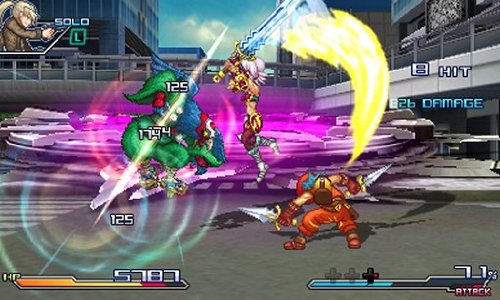 When a rift in time and space suddenly appears, a doorway to various universes is opened allowing both heroes and villains from different worlds to cross paths. Players will be able to take control of a huge selection of paired heroes including favorites such as Jin and Xiaoyu (Tekken), Toma and Cyrille (Shining Force EXA), or X and Zero (Mega Man X) to discover the cause of the rift and stop evil from coming through and spreading into their world.

The 3DS game features characters and worlds from all sorts of games, from Darkstalkers to Valkyria Chronicles to Street Fighter. Other franchises making appearances in the game: Tekken, Mega Man, Resident Evil, and many more. In Project X Zone players will use a team of two characters known as a Pair Unit to explore the world within the game. An additional character known as a Solo Unit can be combined with the Pair Unit to assist in battles with Solo Attacks as well as augment the attacks available for players to execute. Throughout the game, epic battles are waiting to erupt at a moment’s notice. Players will have to master an array of screen-busting moves including Solo Attacks, Support Attacks, Cross Hits, and Finishing Moves in order to defeat a multitude of foes.

The characters are well represented in this constantly crossing battle system, but players do not get a high stakes story. Some humor helps, but a few grandiose dialogue moments confuse and underwhelm. High dialogue doses make reading elemental as players first encounter a doorway among worlds that allow all these character to travel where they please. The protagonists must end this mash-up and contain the evil rivals spread.

The character turn-based battles involve pairs, rivals, solo and cameo appearances. In battle, solo unit provide special help to pairs when fighting rivals. Pairs include take control of a huge selection of paired heroes including favorites such as Jin and Xiaoyu (Tekken) and X and Zero (Mega Man X).

Each character has a number above his or her (or its) head, which represents their maximum movement range on the grid layout in each environment. The A button with left and right buttons works for regular attacks while the Y button enacts the special attack. Players can easily reference available actions on the right side of the touch screen. Players must meet special conditions like defeating a character within a specific number of turns. A maximum of 15 save slots are available. 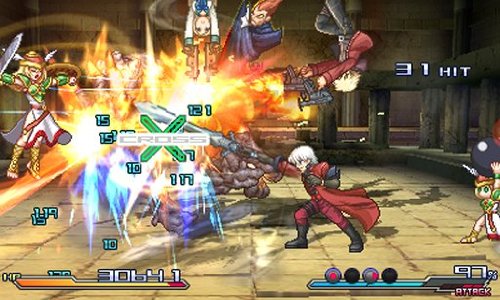 Attack animations get visually crowded quickly. Several characters are in the mix as numbers again factor in. These number represent the damage, but sometimes players cannot really tell what’s going on, so just they must button mash and hope for the best. Good timing, color schemes and visually distinct identifiers help, but chaos still take over here, which diminishes the challenge and strategy.

The numbers can be a decent guide, but may not mean that much. I would rather have actual damage animation in three different severities plus three variants of reaction sounds. Even some choice foreshadowing phrases before each planned attack for added satisfaction. The excellent music includes both the original tracks and quality remixes from the respective game series. Some actions trigger the music, which can overlap a bit.

A great treat for fans and perfect discovery vehicle for unfamiliar that stands well even without extensive character background thanks to the revealing character dialogue. Developed by Namco Bandai Games Inc. and Monolith Soft and published by Namco Bandai, the recommended Project X Zone is the follow-up to the 2005 game titled Namco x Capcom available exclusively on PlayStation 2. Also available in limited edition.

What Needs Improvement: diminished strategic gameplay elements, can quickly get crowded on the small screen