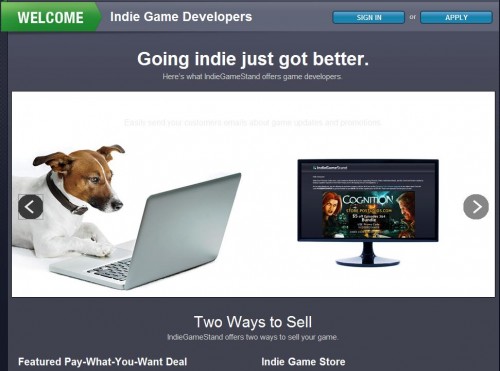 IndieGameStand launched as a pay-what-you-want site that featured a new, hand-picked indie game every 96 hours. It remains a great concept, but today the site is expanding to feature a permanent store designed to make it simpler for indie developers to sell games without the hassles of other sites. Now developers can sell games directly and keep more money.

To celebrate, the store is putting 14 indie games on sale through October 1, marked down 15% or more. You can read up on those games and the reasons IGS selected them for the launch sale here.

The new site will still have the featured deal, but will also have an ‘Indie Game Store’. Here are some of the features of each from the perspective of a developer:

Featured Pay-What-You-Want Deal
?Runs on home page for 4 days
?Reaches a wide audience of gamers
?Yields a large short-term boost in sales
?Donate 10% of proceeds to the charity of your choice
?Net 70% of gross revenue

There are several testimonials from developers at the IndieGameStand YouTube Channel.

Head to the all-new Indie Game Store and check out great deals on great games!