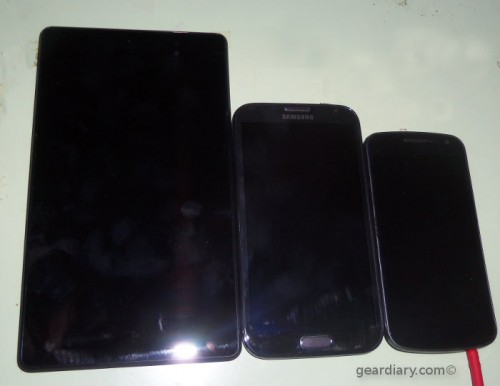 I’ve recently been able to test out a Galaxy Note 2 for a while thanks to Ting. Now that Samsung’s Galaxy Note 3 is almost here, I thought I would lay out the pluses and minuses of going phablet. There are some really compelling reasons that the Galaxy Note 3 just might be my dream device.

The Galaxy Note series are often coined as a phablets.  Part phone, part tablet. The Galaxy Note 3 was already on my shortlist of possible new devices when my contract expires in April, so it only made sense to check out the Galaxy Note 2 while I could. There are a lot of pluses and minuses for phablets beyond the simple fact that they are usually top performers. Phones like the Galaxy Note 3 have gotten really good benchmarks for its hardware even without Samsung cheating. Benchmarks are really just an arbitrary number used to get a measurable read on how good a device is. Some, like myself, say they are mostly meaningless. Still the Galaxy Note 3 is a beast. Once the Galaxy Note 3 is released, it’s safe to say that it will probably be the top performing Android device for at least a month. 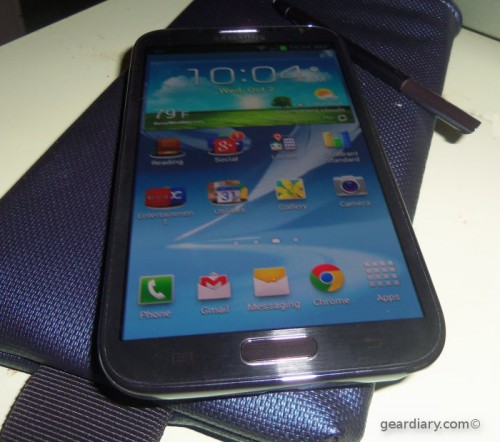 First, the Galaxy Note 2 has a 5.5 inch Super AMOLED screen running at 720×1280 and the Galaxy Note 3 has a 5.7 inch 1080p Super AMOLED display. That makes either of these devices VERY large devices. With that said, I still can fit the Galaxy Note 2 in my hip pocket where I normally keep my Galaxy Nexus. So if you wear skinny jeans or have tiny hands, then the phablet format may not be for you.

Another minus is TouchWiz. The Galaxy Note 2 and 3 both use TouchWiz and while it’s not as bad as I remembered it when Samsung first started making Android based handsets, it’s still not my favorite interface. TouchWiz is LOADED with options which I DO really like, but I question how useful some of the options I would really use. Namely, I am not sure how often I’d use the multiwindow mode. It’s not that the options overwhelm me. They don’t.  They just don’t feel like they belong in an Android experience.  Once you’ve used any of the recent Nexus devices, you get to really like the simplicity of the stock Android interface and when you switch to TouchWiz you begin to miss some of that simplicity. I also feel that the launcher in TouchWiz really wastes some of that gorgeous screen real estate as well.  What use is a big large screen if a half an inch of the screen is used for showing you where in the launcher you are?

The screen size is tremendous.  Yes I have the screen size as a plus and a minus.  The pluses of the large screen is when you are in an app everything is very readable. Plus with the Galaxy Note 3 being a full 1080p in resolution, the display should be as crisp as the display on my 2013 Nexus 7. While the screen does make for a big device it increases it’s usefulness so it’s a definite plus.

The S-pen is another plus.  This is one feature that I initially was dismissing but as I use it more and more I find that it’s a wonderful addition. What’s more is that it isn’t the kind of stylus we all got used to with Palm OS and Pocket PC.  It has many features that just didn’t exist in small devices back then. Double tapping while holding the button on the stylus with the Galaxy Note 2 let’s you take a quick note no matter what app you are in. Tapping and holding create a screenshot that you can annotate. The Galaxy Note 3 takes this even further with its Air Command menu. The more and more I use the stylus with the Galaxy Note  the more I like it. I don’t depend on it, but it let’s you do things you can’t do with just your finger. Plus tehre are apps like Autodesk’s Sketch Book that really make the stylus shine. The S-pen is THE reason to get a Galaxy Note of any model.

Since all Galaxy Notes (1,2 or 3)  are large devices, they can stuff the extra space with battery.  The Galaxy Note 2 ships with a 3100 mAH battery.  The Galaxy Note 3 ships with an even bigger 3200 mAH battery.  Either the 2 or the 3 will definitely get you through a day without needing a charger. Last night when I finally plugged the Note 2 in to charge, it had been unplugged for 18 hours.  Now one caveat is I have mobile data turned off when I am not using it. However I have been leaving the Wifi on and when I am at home or work it’s connected to that all the time. It’s safe to say I if I had 3G/4G on all the time that I would not get the same amount of battery life however I have no doubt that I could get through the day with no visits to the charger.  This will, of course, vary with app usage.  Games like Ingress will suck the life out of any battery so it’s still a good idea to carry a charger or leave one at the desk, but I don’t think you will need it much if you have a normal car commute. Bus and Train commuters like myself may not have as much luck but I can say that it will last much longer than my daily driver, a Galaxy Nexus.

TouchWiz is the final plus and, yes I did it again.  I have something as a plus and a minus.  The plus here is that since Android is open source, it enables Samsung to add features to the OS to account for the out of the ordinary things like the S-pen and the upcoming Galaxy Gear watch by adding the features to the interface itself and the OS. Without this ability, there would be no S-pen.  There would be no Galaxy Gear (which ALSO runs Android) and no differentiation.

Is a phablet right for you? The answer is different for everyone. Having a Galaxy Note 2, I feel safe in saying that it would not successfully replace my Nexus 7 tablet. The Nexus 7 has a bigger screen and is generally nicer when producing content like e-mail or even blog posts. With that said, I’d be more apt to leave the Nexus 7 behind if I had a phablet all the time. The one negative of going phablet alone is that you can’t install some tablet only apps like MightyText’s tablet app on the Galaxy Note 2 so it’s not quite as nice as having a full fledged Android tablet. However, for some it could entirely eliminate the need for a tablet since it’s only 2 inches smaller screen wise than most 7 inch tablets. For me, the answer is I am not sure yet.  I am 90 percent sure I’d like a Galaxy Note 3 but I have to actually touch and feel the new device to see if I really want to go phablet or go for something more human in size like a Moto X. The Galaxy Note 3 is 3.12 inches wide while the Moto X is 2.57 inches.  That makes it much easier to use the Moto X with one hand than the Note 3.