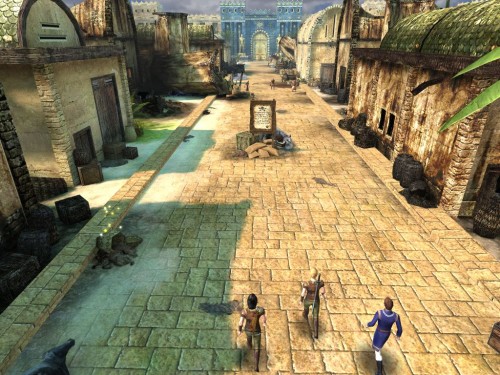 I’ve been talking about The Shadow Sun from Ossian Studios for three years now since it was first announced. I’ve also been able to play beta and preview builds of the game. Now approved by Apple and is headed for a December 19th release, I wanted to give a few quick thoughts with a full review coming next week!

Platform/where to buy: Coming to iPad / iPhone / iPod Touch December 19th; will be available in the iTunes App Store

• A premium, full 3D Western RPG with a story filled with complex characters, intrigue, danger, and shocking surprises.
• A 10-15 hour adventure where you delve into the decadent imperial city of Shar and the exotic desert lands around it, as the Golden City languishes in the grip of a plague and simmers in defiance against the kingdoms of the North.
• Gorgeous graphics using the Unity engine, including normal/specular mapping and dynamic lighting on the characters, as well as anti-aliasing and bloom.
• Create your own male or female character and customize them with different appearances and over a dozen types of armour.
• Choose from among 30 skills to suit your play style and grow those abilities exactly how you want as the game progresses.
• Ally with one of four companions to adventure alongside you, each with their own personality, abilities, and romance options, and gain their approval or disapproval on your actions.
• A useful journal and detailed codex help you keep track of quests and the people, places, and things you encounter.
• Explore over 70 finely crafted areas and uncover 200+ unique items, hidden secrets, and ancient treasures.
• A striking and compelling orchestral music score by long-time Ossian composer, David John.
• Includes Apple Game Center support.
• A universal app for iPhone (3GS and up), iPod touch (3rd gen and up), and iPad (1st gen and up), with Retina display support. Graphics will scale with device.

The Shadow Sun is a third person 3D story-based action RPG in an all-new fantasy setting. You choose a gender, appearance, attributes and skills and are off on your adventure.

You are not playing strict D&D class archetypes, but you can shape your character into standard classes based on skill choices. For example, the skill tabs contain items for warrior, mage, rogue, and general skills. So by focusing on high intelligence and choosing magic skills you will shape a mage.

There are multiple companions available with their own skills and stories – but they are more than just henchmen like Neverwinter Nights. They are true companions who will like and dislike things you choose to do and say.

Moving around is similar to other third-person games – the left side controls your motion and the right side swings the camera around. During combat you can have the camera auto-center on your targets so you will never have to worry about dying because of an enemy out of sight.

Combat is fairly standard action-RPG, tapping on the attack button to use your equipped weapon, or tapping on the combat action menu to use a skill or spell. Skills and spells have cool-down timers before you can use them again. At the same time you also have a mana/fatigue meter that limits your ability to cast spells or use skills without allowing time to recharge.

As you play you will discover much about the world you’re exploring, and have the ability to help people out or to use them for your own ends. Your choices will impact how people deal with you and the options you have with your companions.

If all of this has you saying ‘wait .. this sounds like a REAL RPG’, then you are right! The Shadow Sun is the first ‘made for iOS’ game that feels more like its own game and less like a clone of something else.

The biggest thing I love about the game is how your choice of main character and companion makes a big difference in how the game plays. This means your actions matter, your skills and attributes matter, where you go matters and so on.

I also love that it is possible to create a totally useless character. In one early fight I took a terribly designed character in with a mis-matched companion and died fairly quickly! It was great – because then with a balanced team I could go in and have a tense but very winnable battle. The feeling that each skill level and attribute point matters is critical in a RPG.

The only concern I had playing was about the graphics – while they might have been cutting edge on the iPad in 2010, in 2013 they are not. While this isn’t a huge concern for me, for some iOS gamers it could be a big issue.

Here is my own little hands-on teaser: