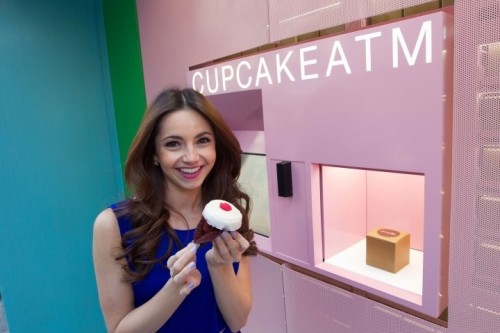 What’s the worst part of wanting a cupcake at 2am? It’s a tough call; your options are usually limited to something in a plastic wrapper from Quick Check, plus you need to actually talk to another human being and admit you’re buying cupcakes in the middle of the night … unless you’re in NYC, where a 24-hour cupcake ATM is opening!

The folks behind Sprinkles are powering the ATM, and they promise to fill it with fresh cupcakes several times a day according to the New York Post. Considering they will be $4.25 a pop, I would hope they’re fresh! Also, should your dog be hungry, you can get him or her a doggy cupcake as well. This is the least you can do for your dog, since I am assuming you’ll use the dog as an excuse to walk by the cupcake ATM at midnight … to “walk the dog”, and somehow that machine just spit a cupcake out at you.

All teasing aside, it’s an interesting novelty idea. And if vending machines that dispense iPads and headphones can succeed in airports, why couldn’t a cupcake ATM succeed?