I have already noted that IK Multimedia hinted at their full-on onslaught of Android music-making at NAMM, and they are delivering. They announced one of the key items this week – iRig UA, allowing users of nearly any Android device to plug in their guitar and make awesome music using a compatible app. Time for Android users to rock out! 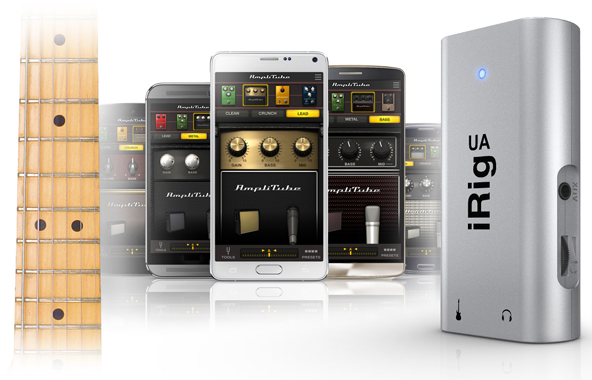 So how did IK Multimedia solve the issue of latency on Android that has plagued the platform? They moved the DSP (Digital Signal Processing) to the iRig UA modul. The solution lies both in the iRig UA and its companion app, AmpliTube UA. An advanced built-in digital signal processing chip directly inside iRig UA provides for the latest generation of mobile modeling technology, while the AmpliTube UA control app provides an easy to use graphic interface that lets users edit their guitar rig and save or recall presets instantaneously.

iRig UA’s on-board digital signal processor works in conjunction with AmpliTube UA, a special version of IK’s powerful guitar and bass multi-effects processor designed specifically for use with iRig UA. And because all of the processing is handled on iRig UA, and not on the Android device, it’s able to provide consistent near-zero latency performance (down to 2 ms round-trip total latency) that’s independent of the make and model of the connected smartphone or tablet. Or, in other words, it offers the plug-and-play performance that mobile musicians with Android devices crave.

For added versatility, iRig UA can also be used as a digital recording interface when connected to a Samsung Professional Audio compatible device or smartphone or tablet with Android 5.0. With iRig UA, the most popular mobile digital guitar interface and virtual guitar multi-effects processor app have finally landed on Android.

AmpliTube UA has landed iRig UA comes with AmpliTube UA, a full-featured version of the guitar and bass multi-effects processing app that revolutionized the way musicians make music while on the go. AmpliTube UA provides a generous and expandable library of highly versatile models of some of the most coveted gear in music history. It lets users create and process their tone with a guitar or bass rig with 3 stompbox effects, an amplifier and cabinet with IK’s accurate volumetric response modeling, a microphone and a tuner. AmpliTube UA also lets musicians get even more creative by letting them place their stompbox effects either before or after their amplifier.

Superior sound In order to provide the best possible playing experience, iRig UA offers everything needed for audiophile-quality sound. Like IK’s other high-end interfaces, it features a 24-bit A/D converter with a 44.1/48kHz sampling rate and a crystal clear low-noise instrument preamp. These features allow it to deliver excellent sound and incredibly satisfying playability, no matter whether it’s used as a processor or digital recording interface.

Comprehensively connectible The pairing of iRig UA and AmpliTube UA is perfect for on-the-go practice. iRig UA features a 1/4” input for a guitar, bass or other line-level instrument, a micro-USB to OTG cable and an 1/8” headphone output with volume control. It also sports a 1/8” AUX input that lets musicians connect any sound source so they can jam along to their favorite tunes with the power of AmpliTube.

Pricing and availability iRig UA will be available Q2, 2015 from music and electronics retailers worldwide, and from the IK online store, for $99.99.

The AmpliTube UA app will be available at iRig UA release for free from the Google Play store.

For more information head to iRigUA.com. There are videos available at www.irigua.com/video