Dan and Judie wrote about how the iRig Mic Field from IK Multimedia helped them cover NAIAS in Detroit as well as CES, and it illustrated another step in how far IK has evolved in their microphone offerings. Now IK Multimedia is announcing their next step with the iRig Mic Studio, an ultra-portable large-diaphragm mic for every platform. 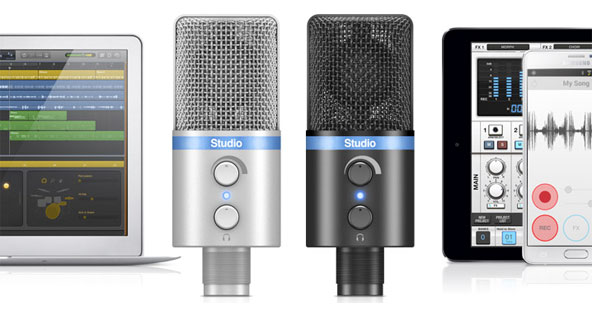 The new iRig announced at NAMM 2015 is compatible with iPhone, iPad, iPod touch, Mac, PC and Android, and works in conjunction with a variety of apps for all mobile platforms. It features a 1” diameter condenser capsule into an ultra-compact enclosure that can be used to make professional recordings anywhere. Here are some of the key features:

Superior portable performance iRig Mic Studio has been designed to provide the best possible recording quality. It features a large 1” diameter back electric condenser capsule, a 24-bit audiophile-grade A/D converter (with 44.1/48 kHz sample rate) and a built-in low-noise high-definition preamp. These, combined with its 133dB SPL rating, allow for optimal audio capture at any sound pressure level — it can capture everything from the subtle and nuanced dynamics of the human voice to the full-on bombast of an amplified electric guitar, and everything in between. And while these features are excellent on their own, what’s truly remarkable about iRig Mic Studio is that it fits its components into a compact enclosure that’s smaller than an iPhone.

It’s all about the connections iRig Mic Studio is compatible with nearly every popular mobile and desktop platform. It comes with a female micro-USB port and an assortment of cables: Micro-USB to Lightning for iPhone, iPad and iPod touch; micro-USB to micro-USB OTG for Android (requires either an Android 5 or Samsung Professional Audio device); and micro-USB to USB for Mac and PC.

Record with the power of apps For immediate recording, iRig Mic Studio comes equipped with a powerful suite of vocal apps. VocaLive™ is a powerful effects processor and multi-track recording app that features a selection of 12 professional real-time vocal effects. EZ Voice™ for iPhone, iPad and iPod touch and EZ Voice™ for Android are streamlined and easy-to-use sing-along apps that make it easy for vocalists to practice with any song in their music library. iRig® Recorder for iPhone, iPad and iPod touch and iRig® Recorder for Android are straightforward apps for field recording, podcasting, note taking and more.

The VocaLive App is available from the App Store at www.appstore.com/vocalive

The EZ Voice App is available from the App Store at www.appstore.com/ezvoice

The iRig Recorder App is available from the App Store at www.appstore.com/irigrecorder EZ Voice is available for Android via Google Play and the Samsung GALAXY Apps store.

Pricing and availability iRig Mic Studio comes in silver or black and will be available later in Q1 2015 from IK Online Store, and music and electronics retailers such as Amazon and Sweetwater Sound. It has a list price of $179.99.

To see the official video of iRig Mic Studio in action, go to: www.irigmicstudio.com/video