For a while my family was entranced with SongPop, the fun and addicting song identification game from FreshPlanet. They also have released MoviePop and other engaging social competitive games. Now for the upcoming Apple Watch release they have announced BoxPop, a game that challenges you to pop boxes and make your way through challenging puzzle grids.

In BoxPop, players attempt to pop all the boxes in a grid without getting stuck, making their way through thousands of challenging levels. The game will be available to play on Apple Watch when the device launches April 24th, enabling the user to engage with the iPhone/iPad versions of Boxpop in fun new ways. 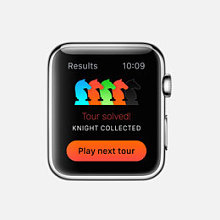 BoxPop takes advantage of the accessibility of the Apple Watch platform to deliver new, innovative ways to play, and adds unique daily puzzles built exclusively for the device. In the game, users are challenged to pop boxes in L-shaped paths, similar to a knight piece in traditional chess, and see if they can make their way through entire grids filled with increasingly challenging shapes – elephants, VHS tapes, castles, and more. BoxPop was one of only two game titles highlighted during Apple’s “Spring Forward” Live Event, and is just the first title that FreshPlanet, a team with a proven track record for launching groundbreaking apps on new mobile platforms, has planned for the Apple Watch.

“We couldn’t be more thrilled to be included as one of the first apps available for the Apple Watch at launch,” said FreshPlanet CEO, Mathieu Nouzareth. “With its unprecedented ease of access, the Apple Watch is the perfect platform to play BoxPop. We look forward to continuing to work with Apple to find new ways to bring users creative, engaging content across the Apple ecosystem.”

To connect with FreshPlanet and its games, visit: