No longer bound by the Windows Phone, Nokia is re-launching their HERE navigation mapping app for the iPhone. Following success on Google Play for Android , as well as a brief stint on the app store in 2012 before being pulled back into beta due to iOS 7 incompatibilities, Nokia seems to have figured things out finally. 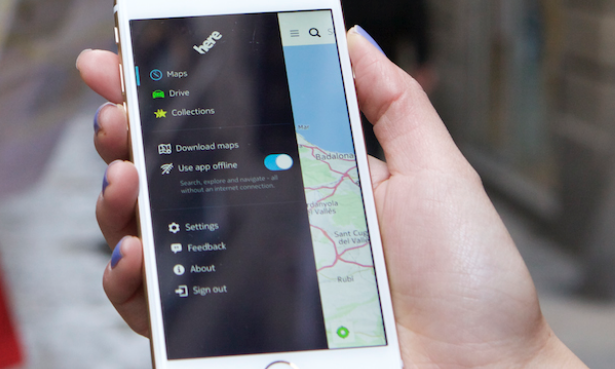 Looking for compete with Google maps for the top spot in Navigation applications, Nokia HERE Maps bring along offline maps for entire countries and regions. The old app was based on HTML5, however the new version has been re-constructed from the ground up. HERE Maps brings full offline functionality, which will allow you to download continents, countries, and more.

Anyone who’s used Google Maps will feel right at home with HERE do to the similar “From” and “To” details as well.
In the Google Play store, Nokia HERE ranks among the top four mapping platforms, alongside Google, TomTom, and OpenStreetMap. Coupled with partnerships with notable names like Amazon, Bing, Yahoo, and Garmin, on top of 80-percent of BMW and Mercedes automobiles using Nokia maps, it’s safe to say, Nokia will be around for quite a long time. HERE Maps is free to download, and Nokia makes absolutely no money from the navigation app through licensing deals for its data.

If you’re in the market for a new navigation app, feel free to download HERE from the link below: