I stopped wearing a watch around the time cell phones became small enough to always carry, probably around 2000 or so, with a Nokia chicklet phone or a Motorola Flip phone. Only when I started running long distances and trying to track my times and paces did I start to think it might be time to actually get a GPS running watch.

And as more activity tracking and other features have been added, what started for me as a ‘running watch’ has become something I wear all the time. 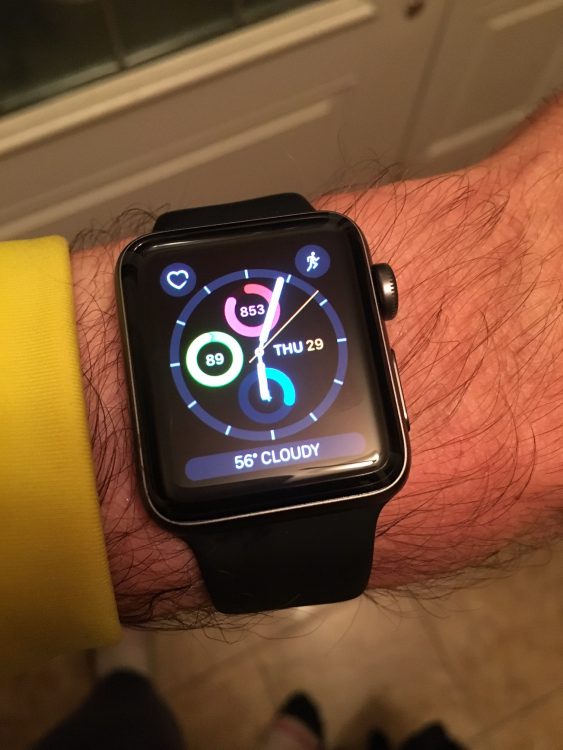 1. The Dual-Mode GPS is Great!

Ask pretty much any runner what they hate about traditional GPS watches, and they’ll tell you “waiting for GPS lock”. It can take from 10 seconds to 2 minutes, and is even LESS fun when it is cold outside!

The Apple Watch Series 2 does have an on-board GPS, which allows you to run without your phone just as you would with a normal GPS running watch. But it also carries over the ‘assisted GPS’ from the original Apple Watch, meaning that it will use your phone’s GPS when it is available to improve accuracy and battery life. With Apple Watch, all you get is a 3-2-1 GO! and you’re off. The down-side? That is ALL you get – Apple Watch doesn’t tell you the GPS status, instead utilizing the accelerometer to work to track distance. 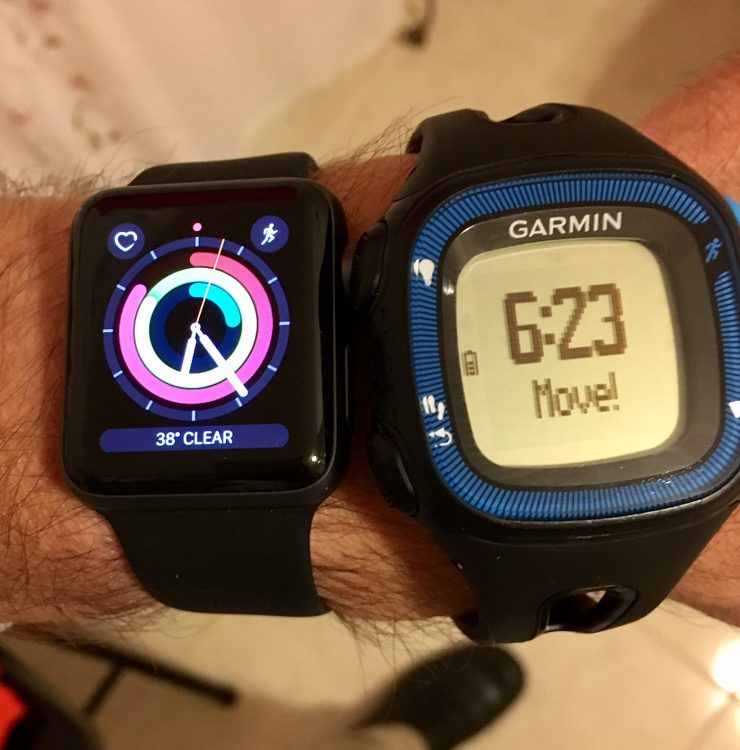 In my testing against two different Garmin GPS watches – both of which I have used in ‘calibrated’ races in the past – the Apple Watch GPS (by itself) measured within 0.1 miles on repeated runs between 10.5 – 12.5 miles, using different routes over basically the same area. As I continued using the Apple Watch alone and with my phone, the accuracy remained high across the entire month.

Prior to the Apple Watch, I was using a Garmin ForeRunner 225, which I paired with Garmin Connect on my iPhone. I could take the rest of this post to go over the various issues with the FR225 and Garmin Connect, but what I DID get was graphs showing my pace, altitude, cadence and heart rate. Graphs, with granularity down to fractions of a mile that I can easily zoom in on.

While the majority of my runs are just ‘for the miles’ and never get looked at again, at least once a week I do a ‘specialty’ run where I am pushing pace, doing intervals, or otherwise just want to see more details about my performance. While I can easily get that with my Garmin, I cannot get those details with Apple Watch – even something like Heart Rate that is being tracked constantly during a run. Instead, we are presented with ‘a number’ – a singular representation of all that has happened over the course of a run. Quite simply – inadequate.

3. What Do You Mean “No Altimeter/Barometer”?

The area I live in is fairly hilly, so I have hundreds of feet of vertical rise and fall over the course of my daily run and even larger hills on a weekend long run. This translates into more effort and likely an increase in my heart rate as I try to sustain an even pace. It can be very useful as part of training to understand how you respond to these hills: can you maintain an even pace, how quickly does your heart rate increase after you start up the incline, what happens when you plateau, and then start the decline, and so on. 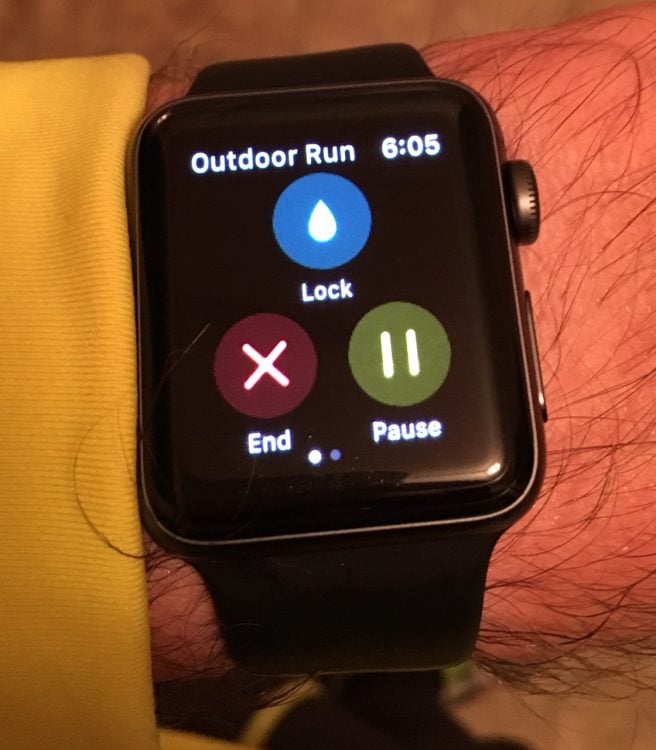 While there is apparently the hardware inside Apple Watch Series 2 for tracking elevation, Apple doesn’t utilize it or report out information from the chip. As a result, it is currently functionally absent. In a watch touting fitness capability, this is frankly embarrassing.

Was the Apple Watch the first decent wrist-based heart rate monitor? No! But when you look at how far we’ve come in just a few years, it is stunning. I had a very early wrist-based HRM system, and it was terrible. I skipped the next round and re-entered with the Garmin FR225, which used a MIO sensor that was common in several different watches at the time and produced reasonable results.

But in no case was a wrist-based solution a worthy replacement for a chest strap – until now. I have been using the Apple Watch and the newer Garmin ForeRunner 235 and checking my results against a chest strap, and the consistency was excellent. As noted above, getting a real handle on the Apple Watch heart rate monitor is more tricky, but grabbing average values and comparing worked quite well.

I also learned another thing – I will never go back to a chest strap!

5. Battery Life is NOT a Big Issue

One of the biggest concerns most runners have with the Apple Watch Series 2 is battery life. I know I had that concern – I mean, it is ALWAYS a concern with runners. My first marathon I ran with my Garmin FR10, which didn’t have the greatest battery life and was giving my a low battery before I finished. For the Apple Watch, running with the on-board GPS for my usual 10-12 miles or so doesn’t drop my battery more than ~20%. When using the iPhone GPS the Apple Watch only loses ~10% or so.

Make no mistake – you will still be charging the Apple Watch every night, and night is the perfect time since it doesn’t do sleep tracking. But what I was hearing after the Apple Event announcing the Apple Watch Series 2 – that battery alone makes this watch useless for distance runners – is simply not true. You will almost certainly be able to run a marathon with the Apple Watch, similar to many other GPS watches (such as the lower end Garmin and Polar and other brands). 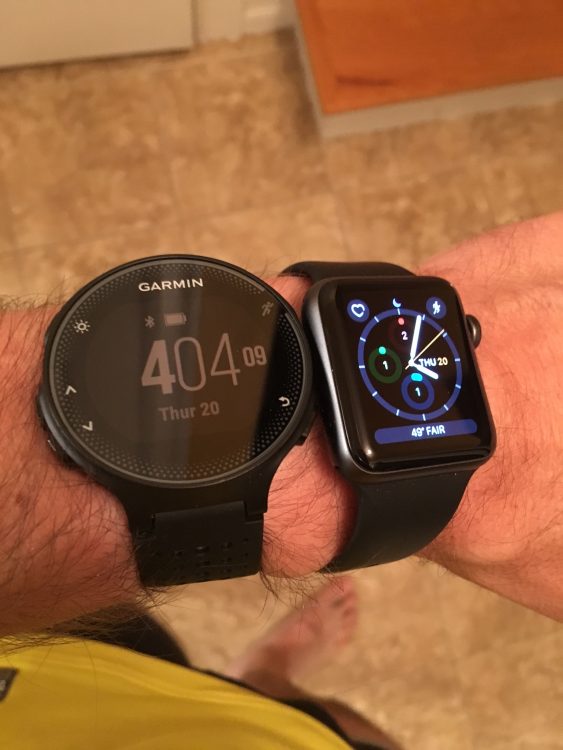 But while it is fine for day-to-day and shorter races up through a marathon, the Apple Watch won’t last through an ultra-marathon, and it is not on par with GPS watches at the same price (such as the Garmin FR235).

6. Raise-to-Wake is a Distracting Hassle

Sitting here writing this it seems like a silly complaint talking about having to tilt up my arm to see the time – it is quick and responsive. Yet when I am out for a run – going as quickly as I can, with arms already in constant motion, dealing with uneven pavement near the edge of the roads and cars coming out and seldom properly yielding – having to do more than quickly glance down is a hassle. Add long sleeves and possibly gloves to the mix? Now it is more of an annoyance since often you will have to lower then raise your arm again to get it to trigger.

7. Auto-Pause is a Runner’s Dream – and Really a Necessity Here

One of the things I love about recent Garmin watches is how well the auto-pause works. What is this? When you come to an intersection and stop for the light, or need to answer a text, or otherwise stop running – the watch recognizes this quickly using the accelerometer and pauses your workout and starts it again when you resume running.

When I started running with the Apple Watch, I didn’t find an auto-pause feature, and just dealt with it. But after so long with the Garmin I definitely missed it, and to make matters worse, manually pausing a run is a much greater hassle on Apple Watch than a standard GPS watch. I tried a couple of times, and then just gave up. The double-button press or swiping and tapping all seem fine in a demo on a stage, but while sweating heavily on a run it is much more of a hassle. So when I found the nice little app switch for auto-pause, I enabled it immediately. It makes a huge difference – it is fast and responsive and I never feel like it is lagging me. 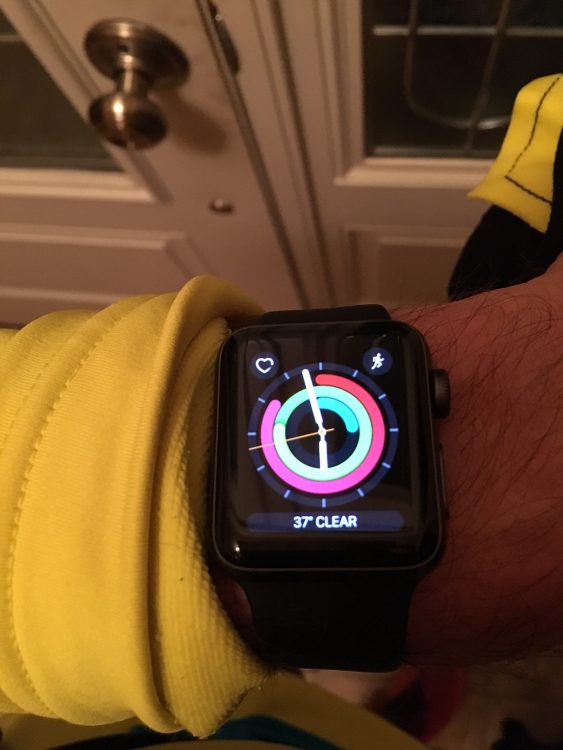 Have you noticed how many times Apple has shown runners in heavy long sleeves wearing gloves? Correct – none. The problem is that a touchscreen that is so wonderful in short sleeves – even in the rain – becomes a hassle when dealing with late fall chills. In fact, there were two times the Apple Watch failed to properly track my run – and both occurred when I was wearing gloves and long sleeves. Evidently, I managed to somehow touch and trigger the watch in such a way that it ended my run. So I have two runs where my Activity app thinks I stopped running miles from home, yet correctly tracks steps for the day.

As a result, I now need to start my workout, then lock the screen, and THEN put on my gloves and head out. It is definitely a bit of a hassle, but at least I could easily come up with a system – and auto-pause helps.

While I have pointed out several things to criticize, the reality is that I love the Apple Watch MUCH more than I could ever have imagined. The tight iPhone integration, fitness motivation, ease of use and comfort all come together to make Apple Watch a joy to wear. But this isn’t a review of the Apple Watch as an overall product.

There are three things keeping me from unconditionally recommending the Apple Watch as a dedicated running watch:
– Lack of a full set of heart rate data
– Lack of elevation tracking
– Battery life limits recommendation to runners of marathons (4hrs) or shorter races.

As noted there are a bunch of other small things I have concerns with regarding the Apple Watch, but they are not really significant. For me, the Apple Watch is a smartwatch first and fitness watch second, which means

The good news? Apple can cure two of my concerns through software – add heart-rate tracking charts to standard output, and enable the altimeter hardware. At that point, the concerns around battery life become more of a clear distinction rather than another item on a list. And personally, as someone who runs ~65 miles per week, I have no issue with the battery life.

Have you used the Apple Watch? What is your experience – how about compared to other running watches?