With all the stories we’ve been hearing about assaults on college campuses, I think that we can agree that the best thing we can do for our kids as they go back to school after the holiday break is to make sure that they are prepared for anything. Accomplish that by sending them back with an ASP Safety Set. 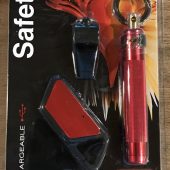 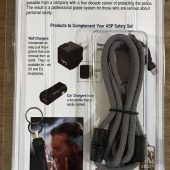 If you’re a civilian like me, then you probably aren’t familiar with ASP, and that’s okay. I reached out to my friend Michael Hess, the VP of Consumer Markets at ASP, for a bit more information about the company:

ASP (Armament Systems and Procedures) has been a leading manufacturer of what are called “less lethal” tactical weapons and gear for law enforcement for 40 years. Our flagship product is the expandable baton – chances are your friendly local police officer has one – and we also make what are widely considered the finest handcuffs in the industry, as well as OC (pepper spray) devices, and ultra high-end flashlights. ASP products were, for many years, effectively available only to law enforcement, military, and related personnel, through channels dedicated to those industries. But we’re now taking a subset of our products – the ones that are appropriate for civilian sale and uses – and making them available through consumer channels.

In other words, this safety set is the real deal, not just some cheap pepper spray combo that you could pick up at your local sporting goods store. So let’s look at what’s included.

Inside you’ll find a breakaway lanyard, a palm defender, an alert whistle, and a sapphire USB light. If you have a color preference, you’ll be able to choose a set that’s red (like mine), blue, gold, violet, pewter, blue, or pink.

Each component is of police quality. These are the same designs utilized each day by law enforcement professionals. These four components come together to create a protection system only possible from a company with a four-decade career of protecting the police. The result is a professional grade system for those who are serious about personal safety.

Included in the packaging is paperwork that tells you how to set up and use the set, with an emphasis on the Palm Defender since that’s the most dangerous piece. 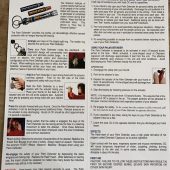 Let’s start with the sapphire USB light; it measures approximately 3″ long including the clippy end that can be snapped on and off the lanyard or a backpack strap. Unlike most small LED flashlights I’ve seen of this style, it has a rechargeable battery with a microUSB charger included. When charging, the LED indicator on the side will glow red, and once fully charged the LED will glow green. The LED flashlight glows at 20 lumens, and it is certainly bright enough for walking home from the library to the dorm down poorly lit paths. You can either press the button on top for light, or you can press the button and slide it forward to lock the light on for less effort while using.

There is a padded 34″ long (17″ drop) gray cloth lanyard that can hold the set around your neck, keeping your hands free. At the bottom, there is a plastic ASP branded retainer that holds a split ring for attaching the various items. At the top, there is a two-piece breakaway clasp; if someone grabs it for some reason, it will pop off your neck rather than choking you.

There is a loud, piercing, plastic whistle that can be attached to the lanyard for alerting help or possibly scaring away unwanted attention.

If the whistle doesn’t do it, then you’ll have the option of using the Palm Defender. Measuring approximately 4.5″ long including the gold button on top, the Palm Defender looks a little like an aluminum flashlight, but instead, it is a sprayer loaded with Oleoresin Capsicum (2 million Scoville Heat Units); these pepper particles are attracted to the eyes, mucous membranes and the respiratory system of your attacker. “Upon contact with the eyes, respiratory system, and mucous membranes, OC will cause temporary impairment of vision, coughing, choking, burning sensations to the skin, and in some cases, nausea. Symptoms should dissipate in about 45 minutes.” Sound fun, right? 😉

A fine, approximately foot-long cone-shaped spray will shoot from the bottom of the Palm Defender, so you obviously want to make sure that the hole on the end is pointed at your assailant’s face (and away from you) should you need to use it. Hopefully, the wind will cooperate with you, too. 😉

Once you’ve sprayed your assailant, you’ll want to back away a safe distance and then report the attack to the authorities. 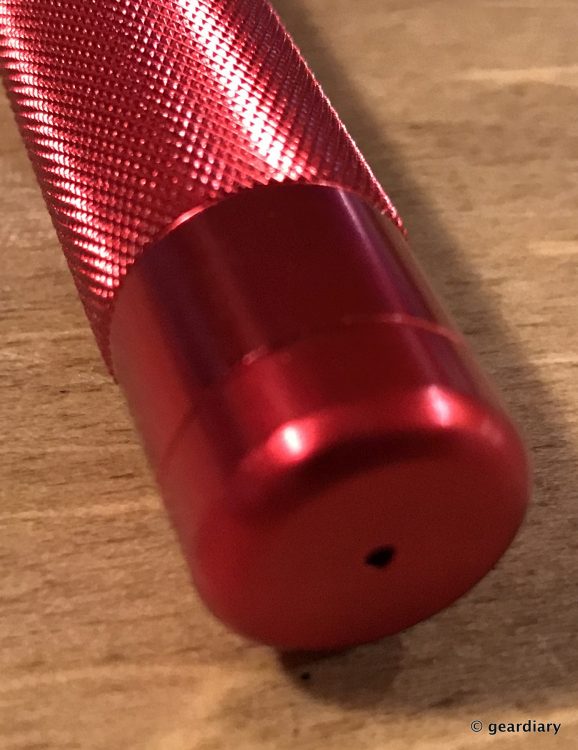 Do *not* aim this end at your own face.

The idea here is that when needed, you’ll press the Pam Defender’s gold button in short, 1/2 second bursts. To make sure that you don’t accidentally press that button, there is a black plastic safety that can be flicked on or off with your thumb. 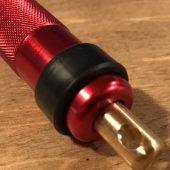 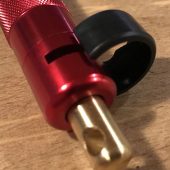 You’ll need to make sure that pepper spray is legal in the city or state where you live (or where your child goes to college), and keep in mind that it is never okay to transport pepper spray in carry-on luggage, but you can carry up to 4 ounces in checked luggage. You should keep this set out of children’s or an irresponsible adult’s reach, as it can definitely hurt them.

Another thing worth mentioning is that the Defender uses replaceable canisters. “There is a “Heat” (active OC) canister included with the Defender, and we do offer a “test” canister so that your student can practice flicking the safety open and spraying harmless water vapor. Just be sure to use the right cartridge for the right purpose!”

Obviously, the safest thing to do is to be aware of your surroundings, use common sense, project a confident attitude, and avoid situations where you might find yourself in danger. But sometimes avoidance or escape simply isn’t enough. Having the means to see where you’re going, alert help if necessary, and defend yourself if there’s no other option gives great peace of mind. The police-quality ASP Safety Set is definitely a great gift idea for yourself or anyone you care about who is regularly out after dark.

The ASP Safety Set retails for $60, and it is available directly from the manufacturer.

What Needs Improvement: You’ll just need to be sure that it is legal to have pepper spray in the city or state where you intend it to be used