Pool season is coming up fast, and so are a lot of holidays. If the special people in your life likes to enjoy music outdoors, then they are going to love the new WOW-SOUND waterproof speaker. Available on Indiegogo for as low as $150, the WOW-SOUND is one versatile, excellent sounding, long-lasting Bluetooth speaker. 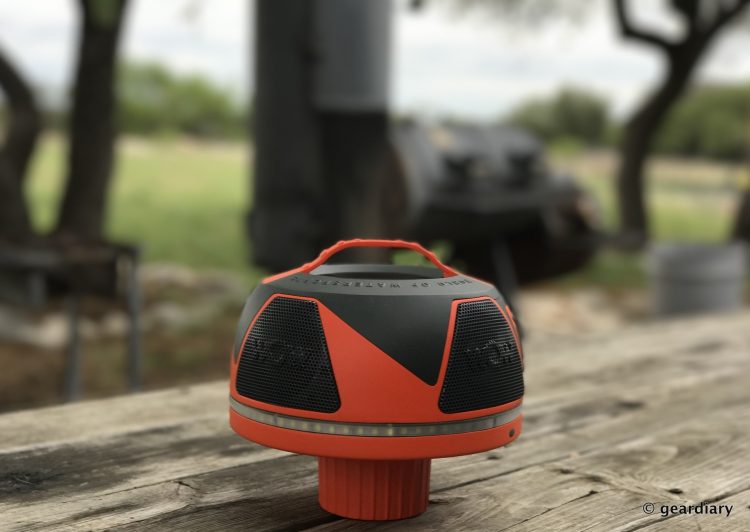 Most of the Bluetooth speakers we review anymore have some kind of water resistance so that’s nothing new or all that special, but the WOW-SOUND goes a step beyond. Not only is it portable and rugged, it has four 2″ Hi-Fi active neo drivers, one 4″ passive bass radiator (no tinny music!), true 360º sound, and it has a battery that can last for 50+ hours. You can even connect several WOW-SOUND speakers together for a really big sound. It will also fit in a cup holder, and it can act as a lantern; the WOW-SOUND seems to truly be the Swiss-Army knife of portable speakers!

The WOW-SOUND looks like an orange and gray mushroom, for lack of a better description. The dome at the top serves a purpose, though: it houses the four speakers and the passive bass. The handle on the top makes the speaker easy to carry or move around. 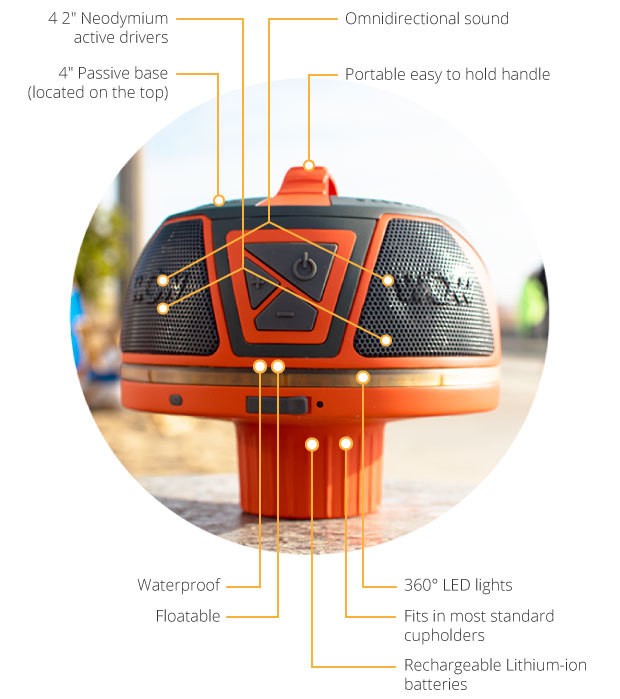 The WOW-SOUND measures approximately 8″ wide by 7″ tall; it looks big, but it is quite compact. The 2.75″ wide base will fit in any standard cup holder. No, I don’t think you’re going to set this in your car, but if you have a pool floaty with cup holders, that’s the perfect spot. An AC wall charger is included in the box; mine came in a plain white box rather than with final packaging, so that’s why I’m not showing it like I usually do. 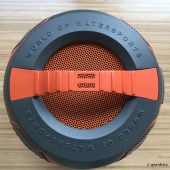 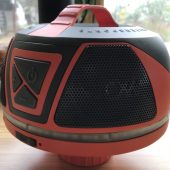 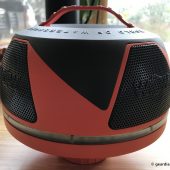 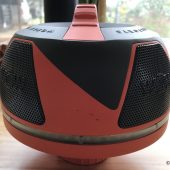 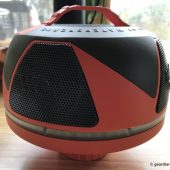 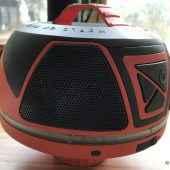 When you spin the speaker so that the controls are facing you, you’ll see a large rubberized power button and smaller + and – buttons. If you press and hold them, the volume will either go up or down. If you press them quickly, the player will advance or reverse to the next song. 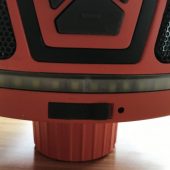 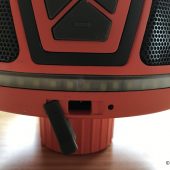 There is a small button on the bottom left that turns the 360º LED lantern on: one press turns the lantern on low, two presses will start the medium intensity lantern, and three presses turns on the brightest lights. The integrated lantern is a pretty cool feature, and I can see how this would be super handy for beach parties, camping, or just sitting in the back yard. 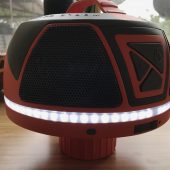 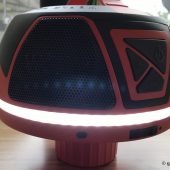 While the WOW-SOUND is most definitely waterproof (yes, I chucked it in our pool to test) … 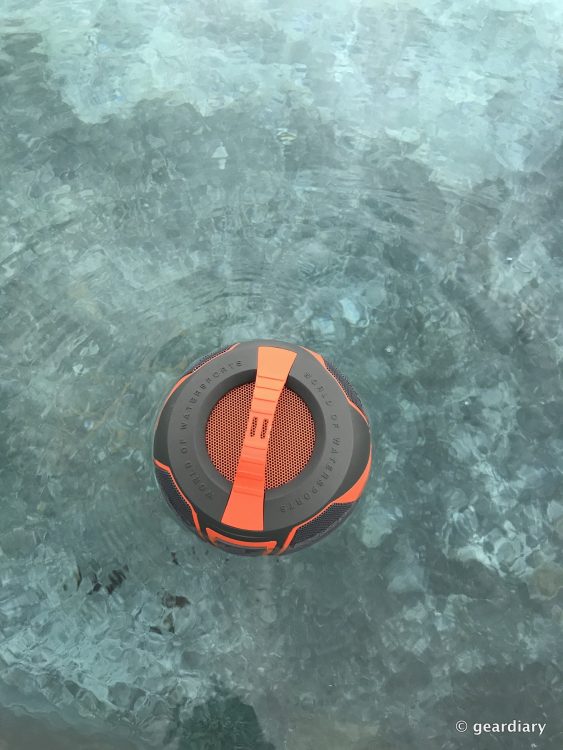 … and while you can definitely hear the sound when it is sitting in the water, the best way to use it in the water is probably by putting it in its own floatie.  You can add a WOW-SOUND Speaker Float to your Indiegogo purchase for $19. It’s probably worth it (if you don’t already have some kind of floating cup holder) because the sound will better project when it’s not getting lapped by waves. 😉 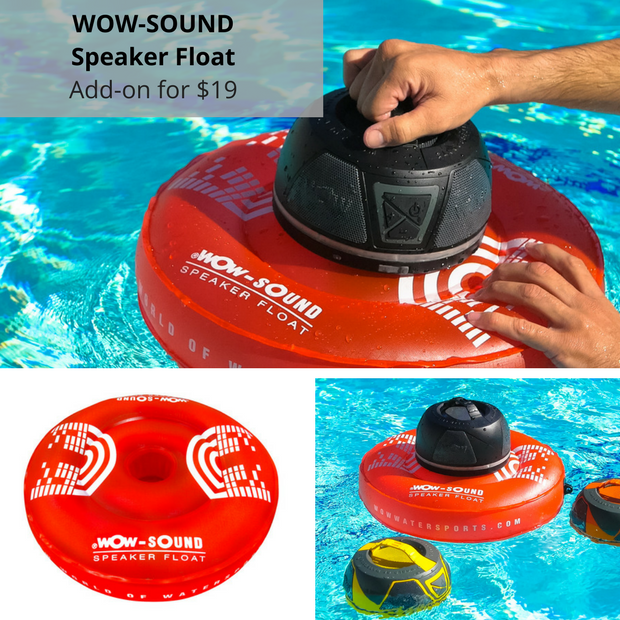 And yes, if you have a couple of WOW-SOUND speakers, you can pair them together for an even bigger sound. 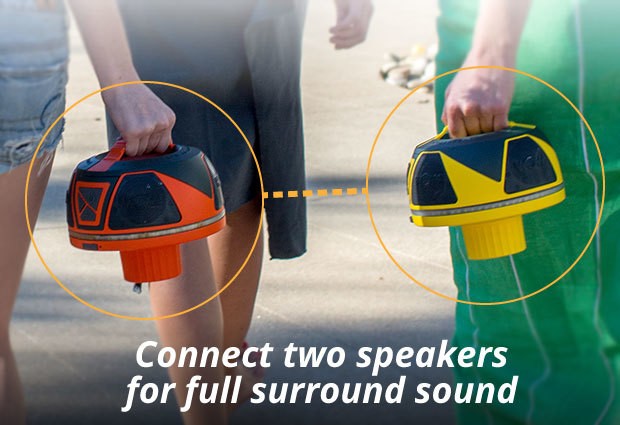 The WOW-SOUND speaker has a different style than most of the portable speakers I’ve reviewed, but the sound it produces is on par with some of the better (and much more expensive) ones.

The bass put out is exceptional; the highs are clear, and the mid-range sound is not muddy at all. Best of all, the 360º sound is no joke; anyone standing around it is going to hear great sounding music that is clear, rich, and loud (if you crank it up). If you set the speaker on a wooden floor, the bass will make the floor shake; that’s pretty impressive. If it didn’t look so ruggedized and outdoorsy, I’d say it would be a great indoor speaker, too.

This is the speaker we’ll be using at our pool this summer; the fact that it gets 50+ hours of playback is so incredible, as I won’t have to worry about making sure it gets recharged every night before use. Great sound, a built-in lantern, a portable design with integrated handle, it’s fully waterproof, and it gets 50 hours of battery life; these are the things that add up to make this one fantastic speaker!

If you have been struggling to figure out what might make a great (belated) Mother’s Day, Graduation, or Father’s Day gift, the WOW-SOUND is a speaker that anyone would be happy to receive. It’s priced reasonably enough that it won’t be painful to give, too!

The WOW-SOUND speaker retails for $229, and it is available from Indiegogo (shipping in June); you can get one for as low as $150 if you back the campaign now.

What Needs Improvement: Not a thing