One of the things I like about my 2015 Macbook Pro is that unlike newer MacBooks, it has the magnetic charger that used to differentiate Apple laptops from all others. If my cable gets bumped or pulled, it breaks free from my laptop — rather than crashing everything to the floor. SynCharge promises to give Type-C MacBooks back that feature. 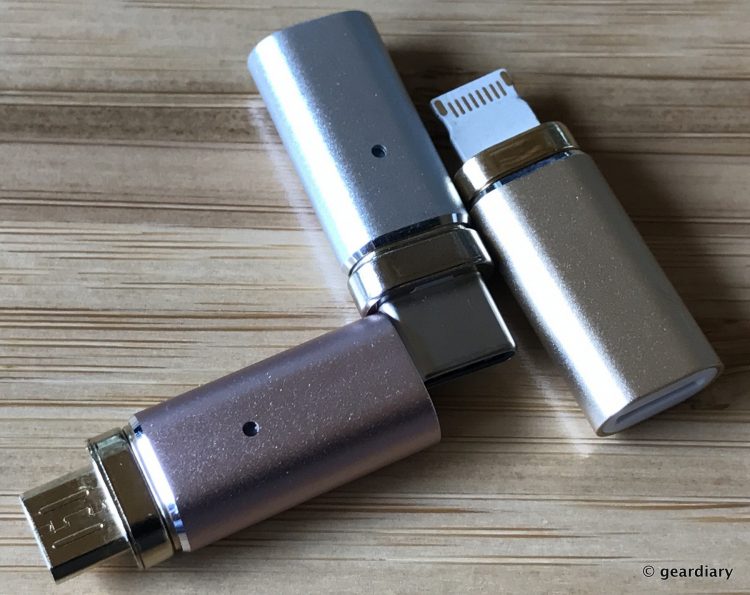 The SynCharge Magnetic Charger isn’t just for laptops that take USB Type-C cables; it also promises to work with mobile phones that take Type-C, and there are also versions for MicroUSB and Lightning. 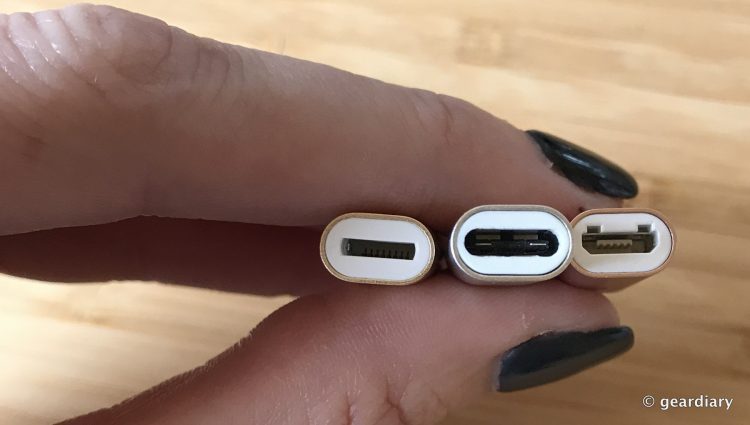 From left to right: tips that attach to Lightning, Type-C, and microUSB.

Here’s how the SynCharge is different from the magnetic cables I reviewed last year, though: rather than using a dedicated cable that works with only that particular type plug, SynCharge has an adapter that fits on the end of your existing USB Type-C, Lightning, or MicroUSB cable; once in place, you can use that cable with any device that has a SynCharge magnetic end inserted in its sync/charge port. 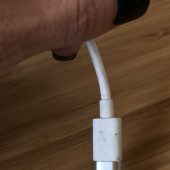 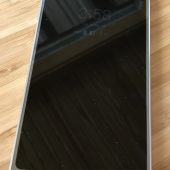 SynCharge claims there are more benefits to using their system on top of the magnetic break-away feature:

So, for instance, if you want to use the SynCharge on your Android phone that takes microUSB or Type-C, you place the larger adapter end on the corresponding type cable, and then you place the smaller plug into your mobile device’s sync/charge port. 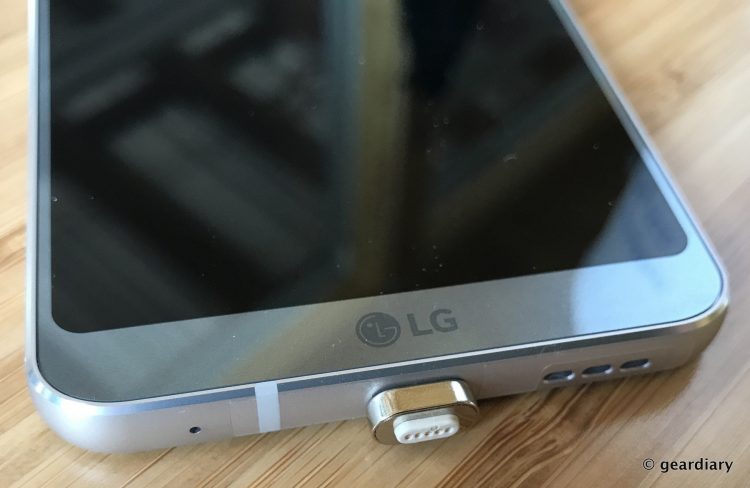 Granted, you won’t be able to just pop any old cable into your charger when this is in place, but if you have other cables that have been modified with a SynCharge magnetic end, they will magnetically attach and work with whatever SynCharge plug you have installed in your device. As an added bonus, a light will glow on the end that plugs into your cable to show you that it is receiving power. 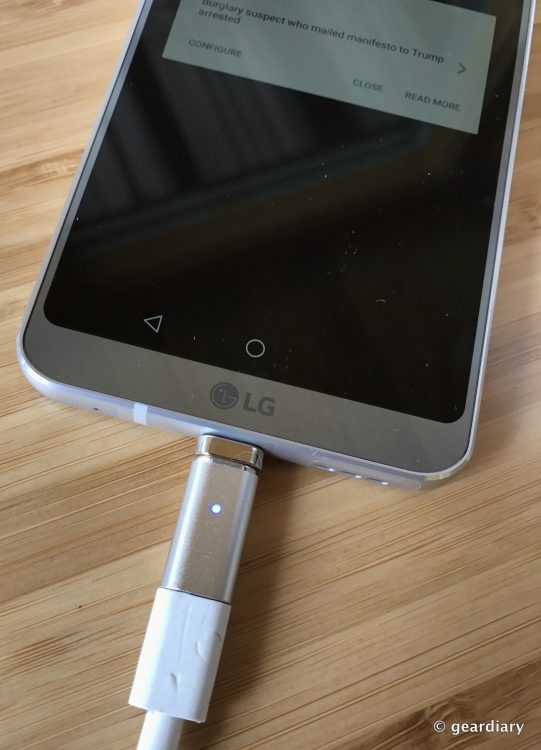 If you want to use the SynCharge on your iPhone or iPad, you’ll simply modify your existing cable by placing the larger piece on your cable tip and plugging the smaller end into your iPhone’s port. You can sync and charge with SynCharge (as the name implies), and you’ll never have to worry about accidentally knocking your device across the room if you trip over the cable. 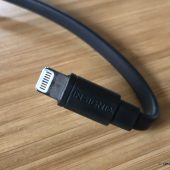 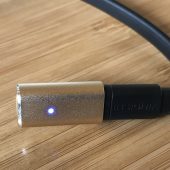 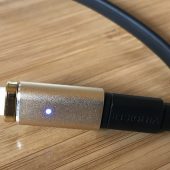 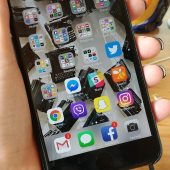 In theory, if you want to use the SynCharge on your MacBook, you can simply place the smaller end into your MacBook’s Type-C port (and keep it there), and then you can magnetically attach the newly altered cable with its tip onto the magnetic end. This would have been the perfect use case for the SynCharge — if only it would have worked properly!

When I used it with the long Type-C cable that came with my MacBook, the light on the longer tip did not glow, and it did not power my MacBook at all. When I used it with the Type-C cable I keep on my desk for charging phones, the light showed, but it actually appeared to discharge my MacBook, as I watched the charge go from 35% to 32% while waiting to see if it would work. This was … not ideal. I so wanted it to work, but alas. 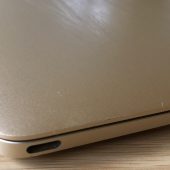 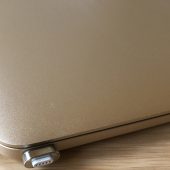 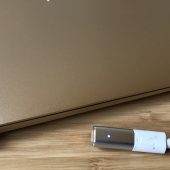 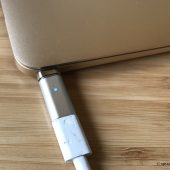 So the bad news is that the SynCharge is not the MacBook magnetic charging solution I was hoping for, but the good news is that it works well with all of my phones. I’ve reached out to SynCharge to see if perhaps the Type-C connector received was defective, or if they are seeing this, too. I’ll update once I know more.

UPDATE 04/21/17: I have received this reply to my inquiry about the USB Type-C Cable.

Thanks for your feedback. The cable applied on your MacBook should be Type C on both ends. We make it match cables with a USB Type A on one of the input ends. And USB Type A and Type C are different on potential difference. Therefore, the adapter cannot be applied on cables with Type C on both ends. Considering that the USB Type A is more widely used, such as in airport and other public places, we make it like this.

UPDATE 05/01/17: I receive another response from SynCharge.

Engineers finally found out why problems happened when charging MacBook.
The reason that you failed on testing SynCharge on MacBook is that you did not take a USB A power adapter with 2-ampere output. Type C adapter can only be used on USB A to Type-C cable, as the potential difference of it is different from Type C to Type C cable. It is applicable only when you connect Type C adapter with USB A to Type C cable and also with USB A Power adapter with over 2A (Since the Apple original MacBook Charger is over 2A).
Similarly, you can also use a USB A power adapter with over 2A and USB A to Micro-USB cable to connect SynCharge Micro-USB adapter to charge Macbook.  If you insist on charging MacBook with Apple original Type-C power adapter, please connect SynCharge Lightning adapter with Type-C to Lightning cable.

So in other words, if you want to charge a MacBook, you can’t use your original cable and charger. They say you need to use a 2A or better USB wall charger with a microUSB cable attached. On the end of the microUSB cable, you’ll attach the microUSB SynCharge adapter. On your MacBook, you’ll attach the Type-C port SynCharge plug. I tried this; it didn’t work.

They also say that “If you insist on charging MacBook with Apple original Type-C power adapter,” you should plug in a Lightning cable then use the Lightning SynCharge adapter on its end. On your MacBook, you’ll attach the Type-C port SynCharge plug. I couldn’t try this, as I don’t have a Type-C to Lightning cable.

The SynCharge Magnetic Cable Adapter starts at $15 for one, and it is available on Indiegogo (shipping in September).

What I Like: Attached to their corresponding cables, the newly magnetic tips should work with any SynCharge plug into any device; Works very well with phones and smaller tablets; Offers magnetic break-away protection to most mobile devices

What Needs Improvement: I could not get the Type-C version to deliver a strong enough charge to power my MacBook