When’s the last time you had to participate in a conference call? If that’s not something you do regularly, then you might think that there’s no reason for you to be interested in a review of the Jabra Speak 710 … but you’d be wrong. 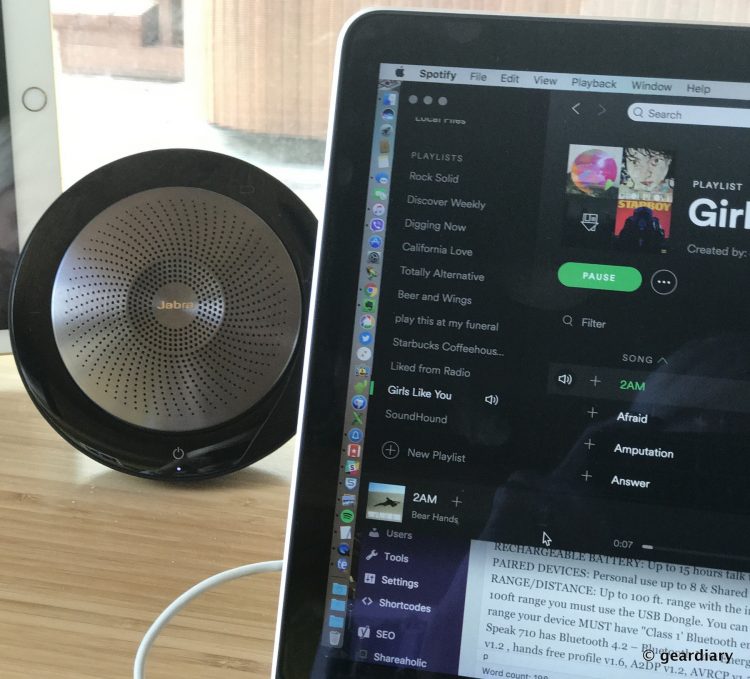 I do have to participate in calls way more often than I care to admit, and making or taking calls is not my favorite thing — apologies to anyone reading this that has ever had to talk to me on the phone; it’s not you, it’s me. It’s not every day that I have to participate in calls, but it’s often enough that I’ve come to realize that I prefer to make all calls without holding the phone to my head. I like to keep my hands free, so I can doodle or take notes.

In a conference call, I’ll usually place my phone on the table and use it as a speakerphone; that’s not always ideal, especially if there are two or more people trying to take part in the call on my end. Then there are the meetings held where I have to dial in and connect with my laptop; I have a MacBook Pro, and the speakers on it are … lacking. Adding the Jabra Speak 710, a conference call tool that also doubles as a great laptop speaker has been the perfect solution. 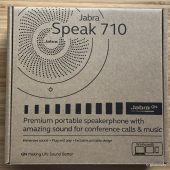 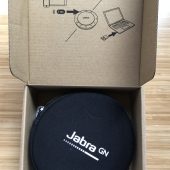 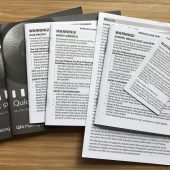 Included in the box are the Jabra Speak 710, a Bluetooth USB dongle, a neoprene travel case, a quick start guide, and warranty information.

What sets the Jabra Speak 710 apart from simply using a portable speaker as your speakerphone? Well, for one thing, most portable speakers can only handle two to three devices connected at a time. The Jabra speakerphone can connect to 8 personal devices, which means it’s no problem to keep my home laptop, my travel laptop, my phone, my other phone, my iPad, and my other tablet connected at all times — no bumping one off to add another necessary. The 710’s omnidirectional microphone can handle conference calls with up to six people in the same room, which is not something that most portable speakers can boast. When you are using the Jabra Speak 710 in regular Bluetooth mode, the Hi Fi speaker has a range of up to 33′, but if you use the included dongle, you can get up to a 100′ range. The 710 has a rechargeable battery that lasts for up to 15 hours of talk time, and; it takes about 3 hours to reach a full charge.

The Jabra Speak 710 measures 5.2″ across and 1.5 thick; it weighs 10.5 ounces. The main body is composed of shiny black plastic with a matte gray metal grill in the center. There are several capacitive buttons around the black plastic bezel; the only obvious one, when it is turned off, is the power button at the bottom. 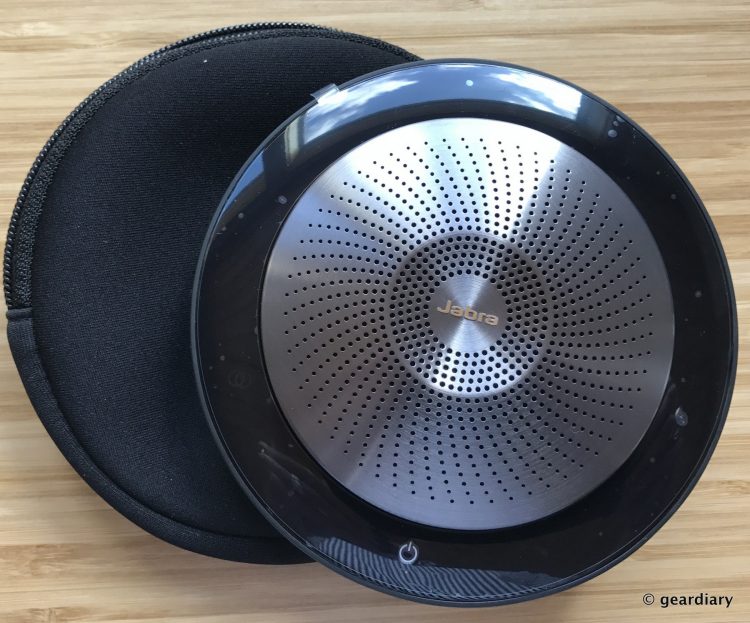 On the back of the Jabra Speak 710, there is a built-in gray plastic kickstand and a slot for the included Bluetooth dongle; you only need to use the dongle if you plan to use the speaker further than 33′ from your laptop. The 41″ USB power cable spools neatly around the body of the speaker. 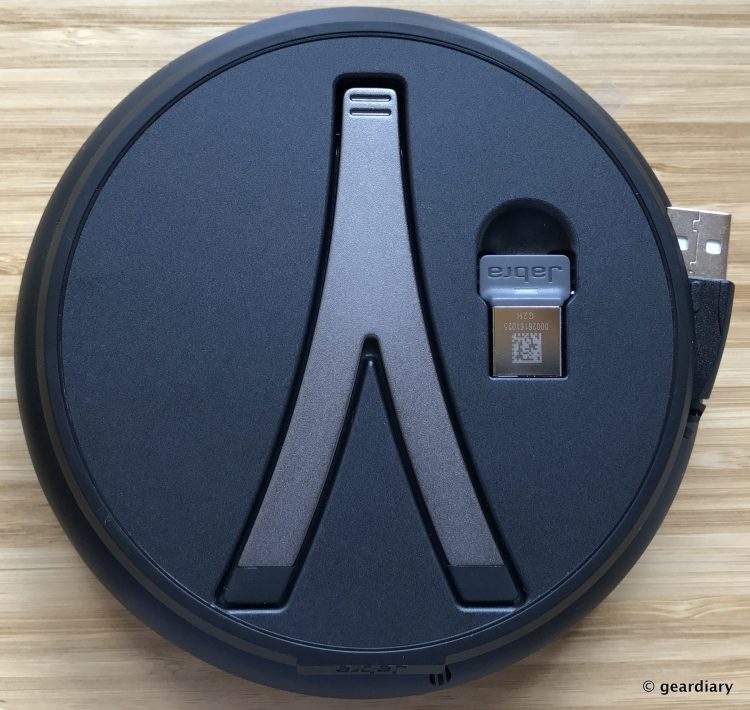 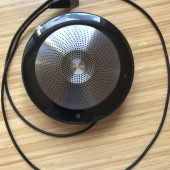 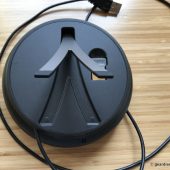 The Jabra Speak 710 has a professional look to it without looking too businesslike. When in conference mode — with multiple people sitting around it at a table — you lay it flat so that the omnidirectional mic can pick up the voices around the table and relay the voices that are remotely conversing. 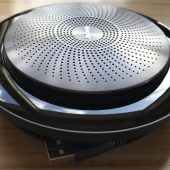 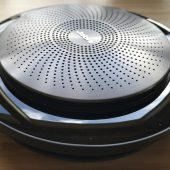 If it’s just one person on your end of the call, or if you are using the 710 as a media speaker for your phone or laptop, then you can stand it up facing you; the kickstand on the back makes this easy and practical. 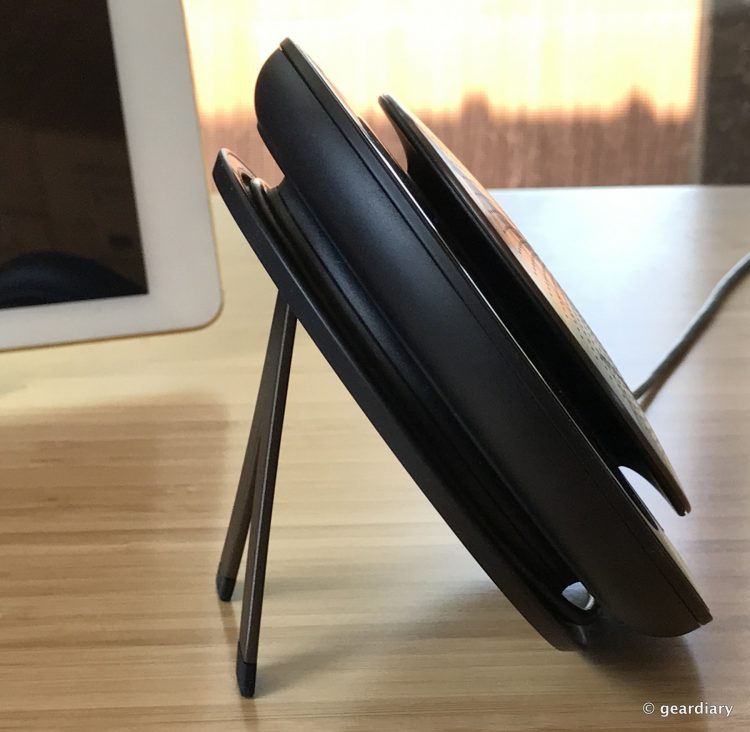 You’ll note that in the next photo, I’ve tapped the black plastic on the bezel and the other capacitive buttons have lit up. From the top left, there’s the Bluetooth button that you’ll press and hold for two seconds to connect a new device. To the right, there’s a battery icon. Across from each other are the – and + buttons that control the volume. Across from each other on the bottom are the call and hangup buttons. 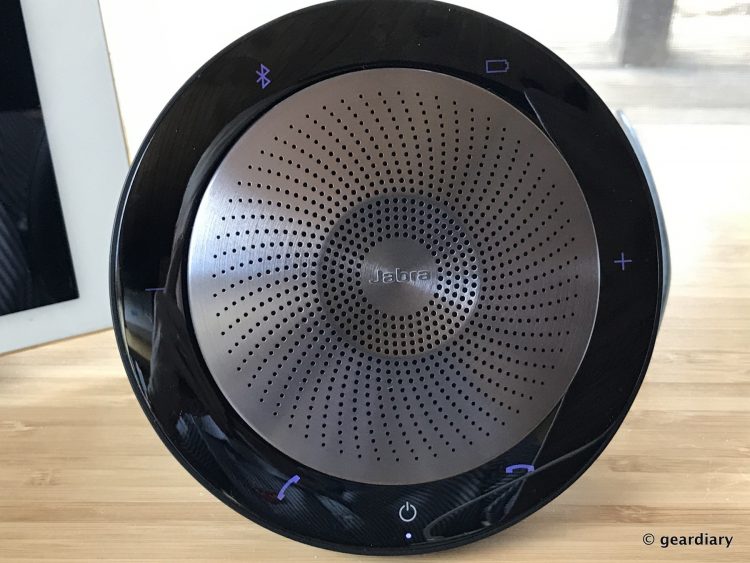 When you’re in a call, you’ll notice that the call and hangup buttons light up with green LEDs, and there is a mute button now showing at the top of the bezel. 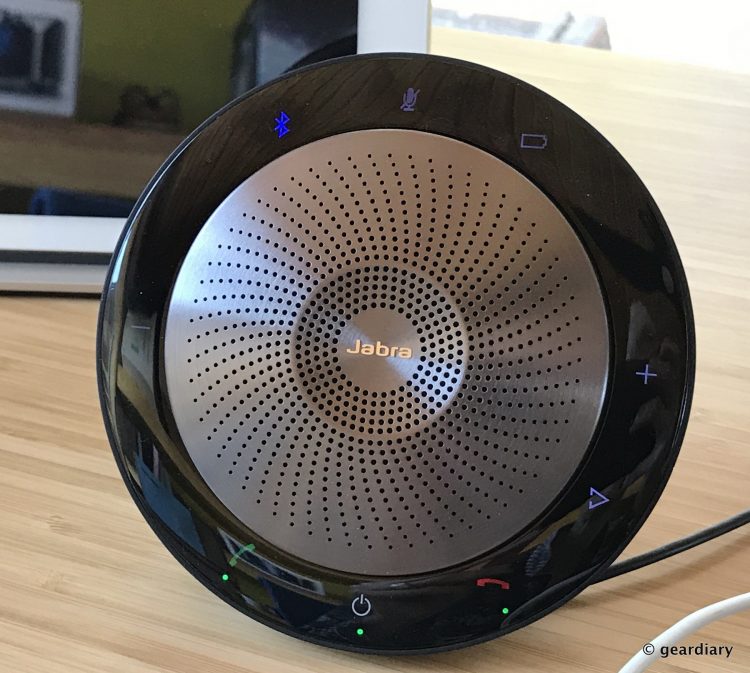 While in the call, you can tap the + button to raise the volume; 12 corresponding white LEDs will light up around the bezel. 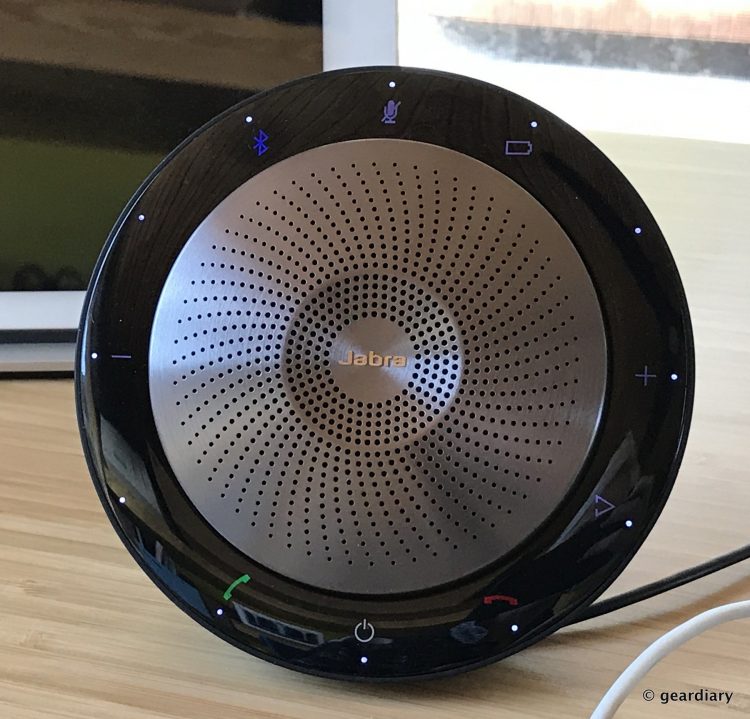 When you tap the battery icon, green LEDs will light up around the speaker showing you the remaining charge in 12 increments. 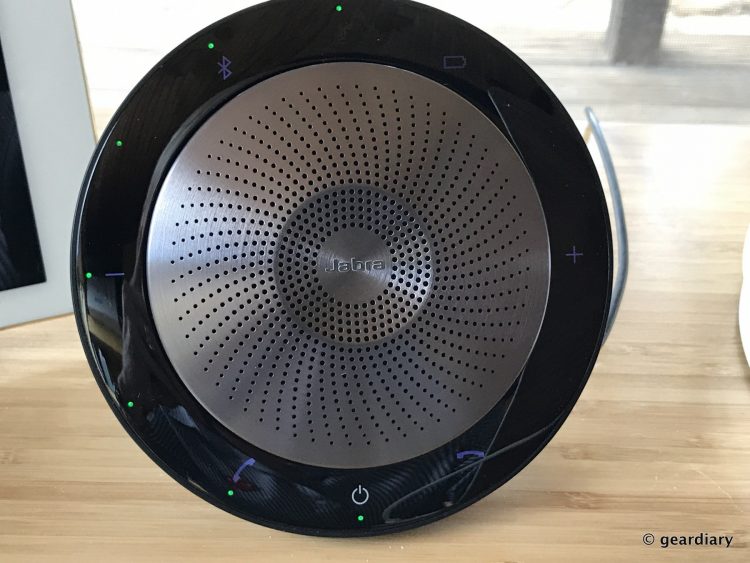 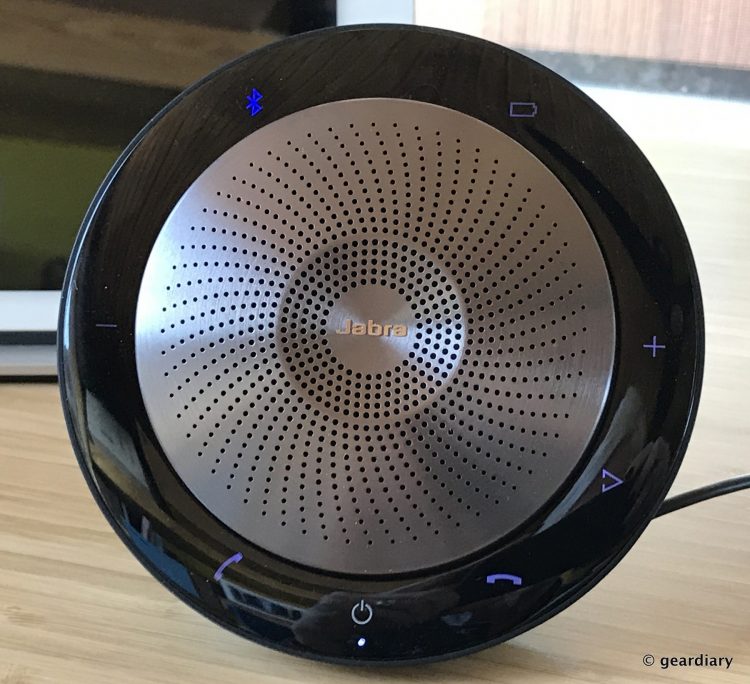 The Jabra Speak 710 is certified for use with the following:

As I’ve mentioned, when you’re by yourself, the best way to use the Jabra Speak 710 is to kickstand it up in front of you. If you have up to six people participating in the call, you’ll lay it in the middle of the table you all are sitting around, and you’ll enjoy clear calls with no feedback or echo. If you have a large group that needs to be part of the conference call, you can link two 710s together; they just need to be within 6′ of each other. That’s really all there is to it. There are no weird delays when you are talking over the 710; and as long as the people who are participating in the call together are sitting together at a table (and not wandering around the room, for instance), everyone will be clearly heard.

But wait; there’s more. The Jabra Speak 710 is also a capable phone, laptop, and tablet speaker. Granted, it’s not going to rock a full room or control a party, but the sound it produces is clear and true for spoken word, podcasts, music, and videos; it is much better than what you would be listening to from these devices otherwise. 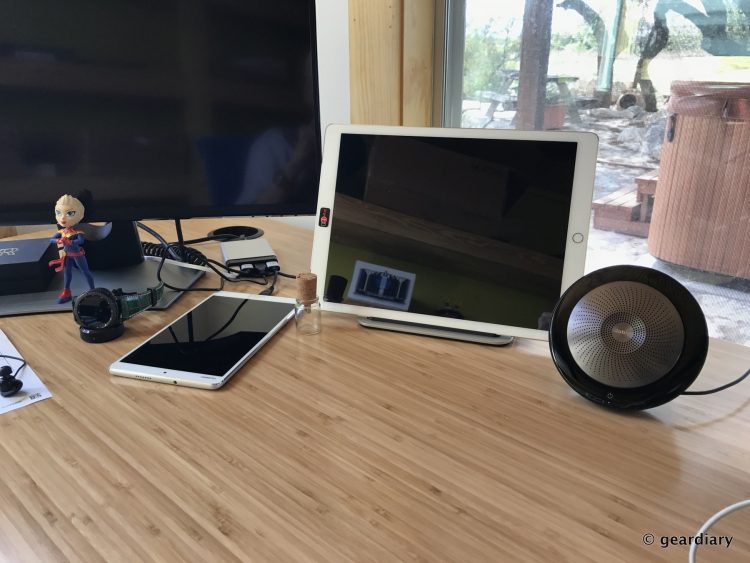 The Jabra Speak 710 is compact and portable; it will easily slip into your backpack or briefcase for travel and meetings, and it will pay you back the first time you find yourself sitting at your desk participating in a call or when you are in a hotel room trying to relax by listening to some music as your work away from home. Sometimes it’s the smallest things that make life easier, and the Jabra Speak 710 definitely fits into that category.

The Jabra 710 retails for $299, and it is available directly from the manufacturer and from other retailers including Amazon (includes bonus wall charger) [affiliate link].

What I Like: Small and compact; Great for conference calls involving smaller groups of people around a table (up to six); omnidirectional microphone so everyone around the 710 can participate; Can be linked to a second Jabra Speak 710 for larger conference calls; Makes a great Hi Fi laptop, tablet, or phone speaker when not being used as a conference call speakerphone; Can connect with up to 8 of your devices; Looks professional yet not too staid; Capacitive buttons for all functions; Digital assistant button (especially handy if you don’t like to keep Siri, Cortana, or Google Now always listening)

What Needs Improvement: If you are buying it solely to be a portable speaker, there are less expensive speakers available