Verizon today unveiled a promotion running June 4, 2017, through June 10, 2017, offering $300 off any iPhone 7 or iPhone 7+ provided the number associated with the phone is ported in from T-Mobile and activated on Verizon.

The offer is currently available only through retail store Target and requires you download Target’s Cartwheel application and clip an electronic coupon. When buying up your iPhone 7 or iPhone 7+ present the coupon as well as port in a T-Mobile phone number for an instant $300 off.

What’s great about this deal is there are no annoying billing credits or waiting for a prepaid card. The savings is instant to those who qualify. 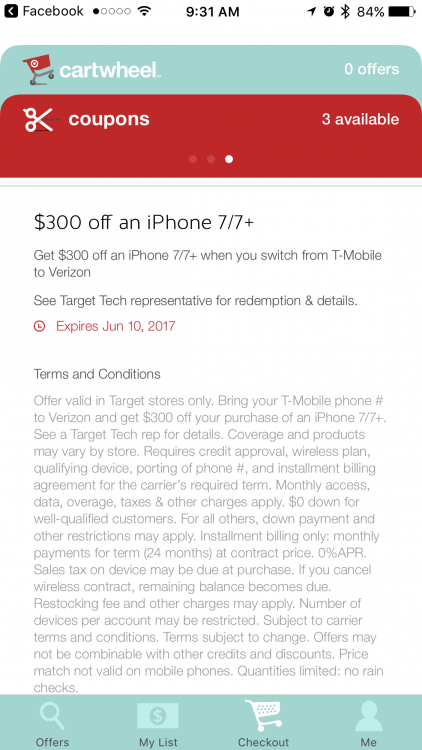 A few users on Reddit have taken Target up on the deal and note they’ve been able to port a number from a carrier other than T-Mobile while still having the $300 savings apply. However, this is most likely a YMMV (your mileage may vary), as the terms of the deal are specific in saying that the port must come from T-Mobile.

This promotion is in response to T-Mobile’s #GetOutofTheRed promotion which allowed Verizon subscribers of 60+ days to bring their iPhone SE, iPhone 6s, iPhone 6s Plus, iPhone 7, iPhone 7 Plus, Google Pixel, and Google Pixel XL to Verizon. In return, T-Mobile would pay off any remaining payments due provided the subscriber enrolled in Device Protection Plus insurance for $15 per month. What makes this deal sweet is the subscriber keeps the paid-off phone instead of having to purchase a new one either outright or with monthly payments.

Remember, this deal only applies at Target so don’t walk into your local Verizon store and expect they will know what you are talking about.