I am in the middle of trying to work with Verizon to change my phone from a Z Force Droid to an iPhone. It’s not by choice, but certain things I need to access for my day job recently went iPhone-only, so I need to switch to iOS. This process did lead to one big realization, which is that Android phones are significantly overpriced for the value.

This process did lead to one big realization, which is that Android phones are significantly overpriced for the value. 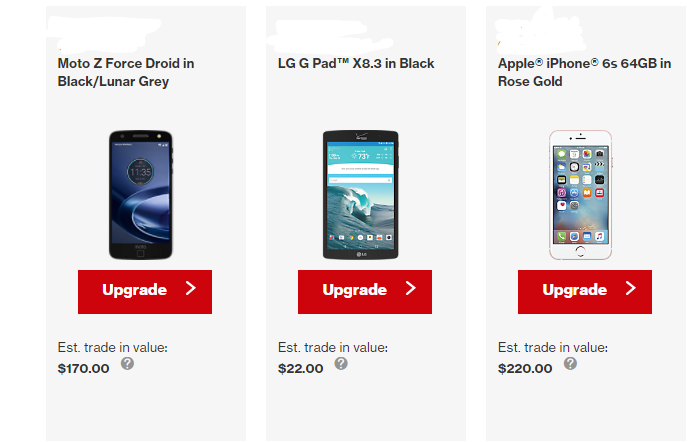 Now, put down your pitchforks, because I’m not talking about subjective value. If you love your phone and get full use of it, then whatever you paid for it is worth it for you. I’m talking about market value here. According to Verizon, my Moto Z Force Droid cost $724 and I currently owe them $484 towards that. If I were to trade it into Verizon, the best I could expect to get from them is $170. For a phone that I bought 9 months ago! Basically, the phone is worth 23% of what it was brand new, and a trade-in would only recoup 35% of my payoff cost. Yes, a used phone is going to plummet in value, but my wife’s iPhone 6S doesn’t suffer the same fate. We owe $252 on her phone, and it is worth $220 on trade in. So in theory, we could pay off her phone and trade it back to Verizon while recouping 83% of the cost.

Since I’m trying to play fair, I also checked what Amazon would give me for trade-in (Gazelle would not even take the Z Force). They would give me a whopping $37 for it. The 6S would get me $210 at Amazon and $195 at Gazelle. Meanwhile, on Swappa I could expect anywhere from $300-$375 for the Z Force and an average of $425 for the iPhone 6S. So while going through a 3rd party is better, it’s still significantly below what I owe on the Z Force.

So let’s play with the numbers from Verizon for a moment. Let’s chop 15% off the cost of the Z Force, so I started at around $615, with monthly payments of $25.63. At month 8, I would have paid $205 of the $615. Assuming the same trade-in values, I would recoup around 41% of my payoff amount. Still not as good as the iPhone, but it’s a decent jump of 6%, and the overall slide in value is 27% of the starting cost, so we’re up 4% there as well. None of this is great, but it’s an improvement, and more importantly, starting from a lower price better reflects the rapid decline in value.

Verizon told me point-blank the only phones they will upgrade at 50% paid these days are iPhones and the Samsung Galaxy S8. It is in the best interests of both the phone manufacturers and the consumers to accept this reality and adjust pricing and demand accordingly.

Motorola makes a great phone, but where’s the value for a consumer in paying nearly the same as they would for a Galaxy or iPhone, but with a rapidly declining market value? Purely by the numbers, it makes zero sense to pay for a flagship phone that will quickly be worth the same as a budget model. Much like a car, the average Android phone will rapidly deteriorate in value as soon as you pop in your SIM. Cars are priced in part according to this reality — you’re not going to pay the same for a fully loaded Honda as you are for a comparable fully loaded Lexus, even if 99% of the features and technology are the same. Phones should reflect that same market pressure, and until they do, we’re going to see LG, Moto, and the other non-Samsung device makers struggling to get a foothold, because more and more consumers are going to see they get more value back from their carrier for a Samsung or an iPhone.

Do you think flagship phones should be priced differently? Share your analysis below!