For the hearing-impaired, communication can be difficult, especially when it involves someone who doesn’t know sign language. Even with the most obvious of signs, you’re still speaking a different language entirely. 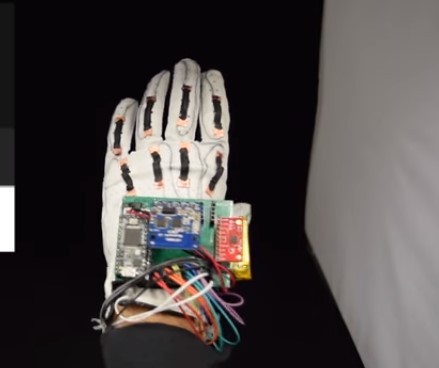 A new, relatively affordable glove may change that.

What’s the Point of the Glove?

Any current systems to track gestures and human body movements require cameras, complex optical systems and infrared emitters and receivers. They’re not ineffective — in fact, they’re entirely accurate but need lots of power to operate. Not to mention they can be bulky and difficult to move or transport.

The glove crushes nearly all those problems. It’s outfitted with wearable electronics, which includes the necessary PCB boards and sensors to complete measurements. A total of nine flexible and well-placed strain sensors are positioned throughout the glove. There are two sensors on each finger and one on the thumb, all used to detect movement patterns and gestures. The fingers sensors measure knuckle articulation which allows software to detect the positioning of the entire hand.

A microprocessor is used to detect the current gesture and spit out an ASL letter, which can then be transferred via Bluetooth as text. Presumably, devices could snatch that wireless signal and display the text on a screen. A smartphone would be a good candidate for a portable display seeing as most carry their phones with them everywhere they go.

As for the cost of the glove, it’s less than $100 to acquire all the necessary parts and build the device. The power requirements are super cheap, especially compared to traditional translation methods.

How Can It Be Used?

While the primary application for the glove would be to translate American Sign Language to text, that’s not the only practical use for a device such as this.

Scientists have successfully used the data from the glove to translate gestures into letters, and even transmit the virtual data into a usable form. They could create a virtual hand that mimicked the recorded gestures accurately.

This shows the potential of using wearable electronics — such as the glove — to interface and translate movement to a virtual environment. Imagine, for example, a glove such as this being used in conjunction with a VR headset. Your head movements and hand gestures can all be translated for use in the digital space.

In the far future, it could also be used for things like telesurgery or aerial and remote drone piloting. The former requires surgeons and doctors to perform complex surgeries and operations via remote electronics. Think of it as like a video conference, only where a major surgery is happening. It’s tough for the surgeon in question to feel what they are doing. VR and a glove such as this could make it much more realistic, especially if coupled with haptic feedback technology.

Of course, the main draw will always be the translation of ASL to text-based data. Speech recognition services of all kinds face challenges to some extent, especially when it comes to adapting technologies for the hearing-impaired.

By nature, speech recognition technology is faster, more accurate, and allows for hands-free operation when it comes to translating words and information to text. The problem is allowing the hearing-impaired to take part. They could speak, but there’s no way to relay information back to them in an efficient way. By the time the text is translated and displayed on a screen, the user will need to edit any inconsistencies or make changes that were incorrect.

The low-cost glove will allow everyone to participate in using these technologies opening up many doors and opportunities.