Unfortunately, by this point, her health was not good and she never fully recovered; she never gained back the weight she should have had or stopped obsessively over grooming herself. Although Avah lived for another two years as an outside cat, I knew that something in her was broken, which in turn broke my heart.

A few years after Avah died, we adopted another cat, Hephaestus. One of the biggest changes we made to his previous all-indoor life was that once we knew that he was well aware of where his home was, we allowed Heph to be an indoor/outdoor cat. Heph is healthy, and he has a beautiful coat. I am convinced that being able to go outdoors to hunt and do all the other things cats like to do when no one’s looking have had a healthy effect on him.

But what if you live in an apartment, and your cat can’t safely ever go outdoors? What if your cat is starting to display unwanted behavior like scarfing and barfing, or peeing outside its clean litter box? How can you help?

After talking to Liz Bales, I think that Doc & Phoebe’s Indoor No-Bowl Cat Feeders might be the perfect solution.

Here’s how Doc & Phoebe’s Indoor No-Bowl Cat Feeders work. You fill five of the mouse-shaped feeders each day, and you hide them around the house. Cats have an advanced sense of smell, and they will “hunt” the food-filled mice when they are hungry. Your cat will be getting the food it needs, but it will also be getting the hunt-kill-eat play that it needs to keep it engaged and healthy.

It might take a bit of training for your cat to realize that they now have to hunt their food rather than getting it from a bowl, but once they’ve figured out the system — and cats are smart, they will figure it out — they’ll be getting the hunt-kill-eat play that they have been missing.

I asked Liz how practical hiding five “mice” around the house might be — what if you aren’t able to find the “mouse” later for refilling. She said that it’s normal behavior for cats to leave the “mice” where you can find them — presenting their “kill” to you as a gift, so to speak. That makes sense to me.

Doc & Phoebe’s Indoor No-Bowl Cat Feeders seem like a great way to allow indoor cats to get the hunt-kill-eat play that they need — with the reward of being fed after their “kill”. If you have an indoor cat, you might want to check them out. 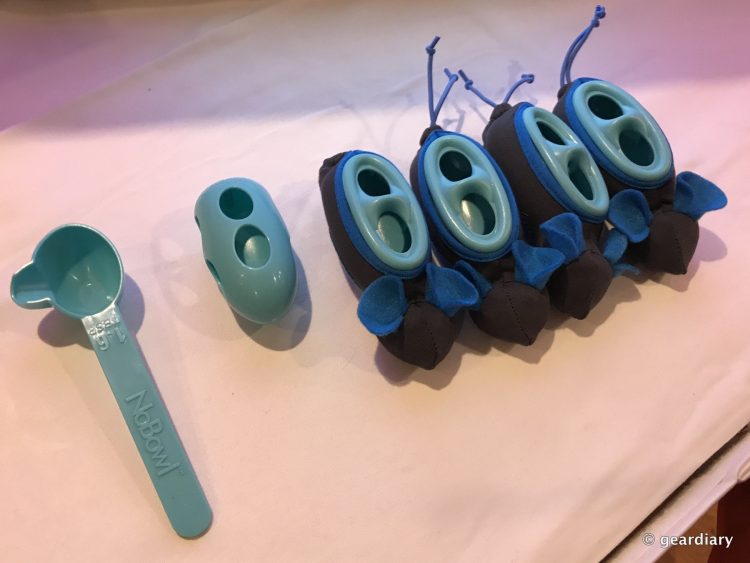 At $39.99, the kit includes everything you need to get started; if I still had an indoor-only cat, I’d be using it.