What does your watch do? Notify you of emails? Buzz when you get a phone call? Track your steps? All that is great, but sometimes you just need a watch with more practical features. The kind that let you enjoy life beyond being tethered to a smartphone … that’s where the Casio Pro Trek comes in. 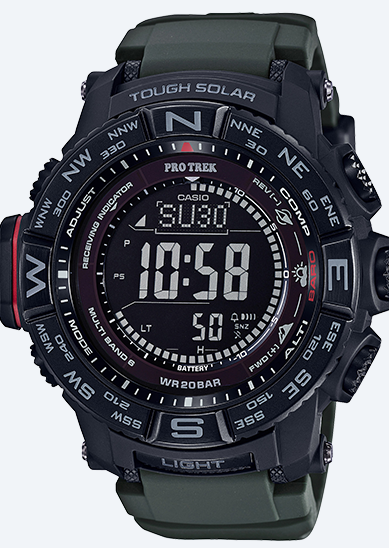 The Pro Trek line from Casio contains what are commonly called “ABC” watches-Altimeter, Barometer, Compass. As I joked when the watch arrived, I could figure out how high to climb a mountain and know when a storm was coming as well as which direction it was headed.

However, since I live in suburban New Jersey and winter is apparently in a panic about meeting snow quotas, I didn’t get to climb any mountains. I did get to test the watch’s features, especially the barometer, and had a lot of fun doing it! We took a look at the PRW3510Y, which is a bit of a mouthful, so for the rest of the review I will be referring to it as just the “Pro Trek”, but technically Pro Trek encompasses a much larger line of watches, and you can see the full lineup here.

Here’s the first thing about the Pro Trek: it’s a big, busy watch. This is not a watch that exists to quietly tell the time. On the left side are two side buttons, and in between them is a protrusion that I assume holds electronics related to measurements. On the right side are three more function buttons, the bottom has a backlight button, and the dial has compass markings. Inside the dial is another ring that contains labels for all the function buttons, and then finally an LCD screen shows the time, date, and seconds. And that’s just the default screen. Basically, there’s a large amount of information strapped to your wrist with the Pro Trek. 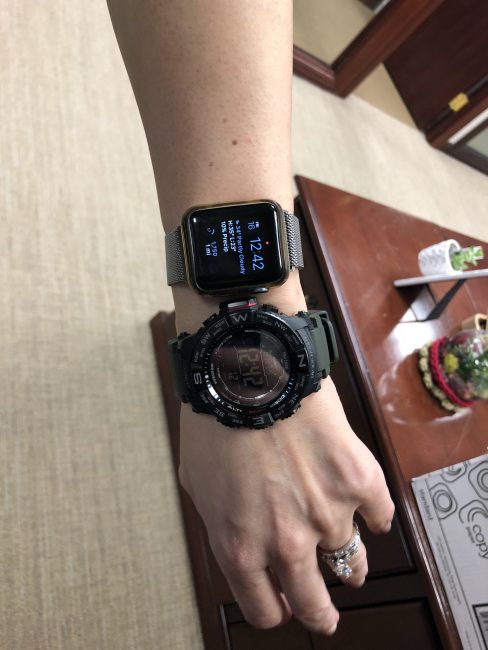 On paper it sounds bulky and awkward, but in reality everything comes together well. It’s indisputably a rugged watch, but it has a cohesive style and a lot of charm. I had a few people compliment it, and even the people who declared it “way too big” acknowledged that it looks great, even if it’s not for them. I have relatively small wrists, but the watch doesn’t overwhelm when I wear it. It has a sturdy silicon band, and there are support wings on the underside of the watch to keep the band and watch shaped for a normal wrist. That way you don’t get that awkward sharp pain as a straight watch back collides with your wrist. The best way I can describe the looks of the watch are that they look like they shouldn’t work outside of a trip outdoors, but somehow they come together in an aesthetically pleasing way, and manage to look decent with both jeans and a business suit [if you’re me, and decided that if all your colleagues can rock Apple Watches then you can wear a rugged Casio]. 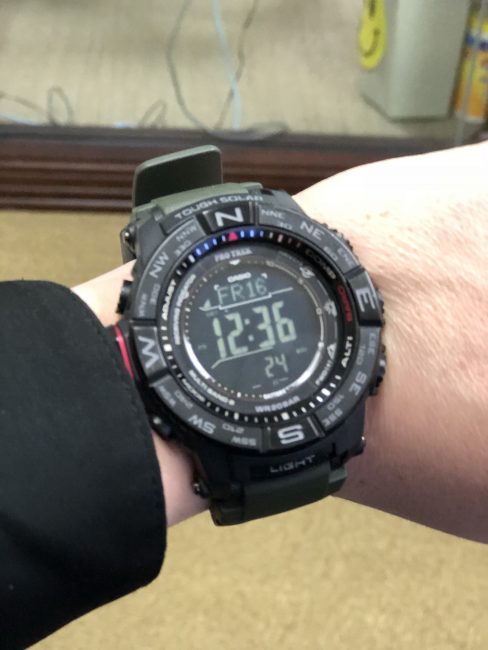 The Pro Trek has a number of super cool tricks beyond just the altimeter/barometer/compass trio. For one, it’s an atomic watch, meaning it syncs back to the nearest atomic clock tower. Basically, as long as the watch can phone home, your time and date should stay accurate. You can check with the multifunction button to see when it last received an update if you’re concerned, and you can hold down the button to force a sync if needed. The watch also allows you to set the time manually if for some reason you can’t connect to the atomic sync due to weather, geography, or other issues. The Pro Trek also sports the usual digital watch features of stopwatch and timer, plus a world/alternate time screen and multiple alarms.

But one feature in particular is very, very cool-you can pull up sunrise/sunset times for your home time zone all the way back to January 1, 2000, or all the way ahead to December 31, 2099. I haven’t the faintest idea why you might need to know when sunset was on February 8, 2003, for example, but if you needed it and had a lot of patience for scrolling the watch will tell you. Setting aside jokes though, this is actually a super handy feature to have in an outdoor focused watch. Let’s say you’re out on a hike for the day. Maybe you don’t have the greatest signal on your phone, and it’s getting fairly late. Being able to know sunset with the touch of a button gives you a much better idea of whether you’ll need to turn around or will make it to your evening destination before dark.

There is no smartphone sync, but the Pro Trek can record and save altimeter readings on the go. An altimeter is a way of measuring altitude using the barometer, and it’s helpful if you want to know how high you’ve climbed. You can either spot check your altitude, or you can have the watch record your altitude changes over time, allowing you to track an entire hike/bike ride/spelunking expedition. This is, quite honestly, far more useful than how many steps you’ve taken, or the guesstimate your Fitbit gave for how many stairs you climbed if you’re trying to measure the intensity and hilliness of your route. 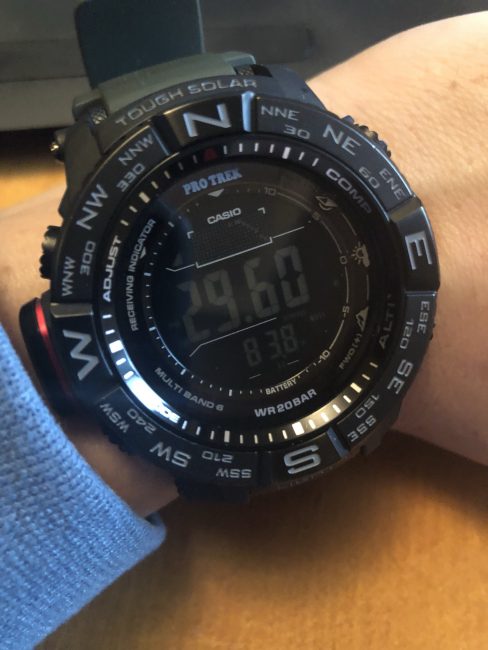 Tracking dropping pressure as the snow storm heads our way.

By far though, the feature I’ve used the most is the barometer. Barometric pressure is the weight of air, effectively — it measures how much air is being pushed down towards the surface. High pressure means the air is too heavy to hold clouds and storms, while lower pressure makes storms easier. Hence why a falling barometric pressure is a sign of poor weather coming. The barometer on the Pro Trek features a tiny chart along the top LCD so you can see not only the current pressure measurement but also whether it seems to be rising, falling, or relatively stable.

It’s been fun to geek out with measuring the weather, especially when we had two nor’easters whip past New Jersey inside of a week. As the first one began to gear up, I would check the barometric pressure on the watch, and sure enough, as the weather got worse, the pressure kept dropping. The same thing happened with the second storm, when the state basically shut down at 8am and snow didn’t appear until almost 12pm. Everyone was getting antsy and joking about the wasted snow day, but I could see the pressure dropping every time I checked the watch, and so even without the poor weatherman getting whipped by heavy snow on TV, I knew the snow was coming. 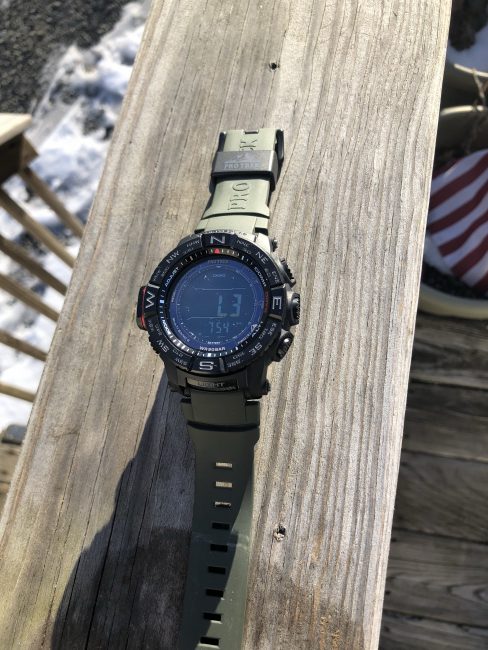