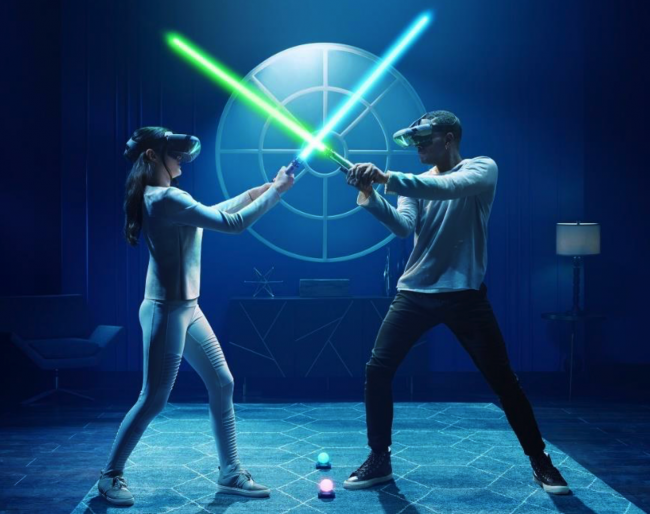 We can’t say that we didn’t see this coming, but just in time for May the Fourth, a multiplayer mode has finally arrived for the Star Wars: Jedi Challenges AR system. More specifically, the multiplayer mode is being called Lightsaber Versus Mode, and it will be available via a free app update on the App Store and Google Play.

Lightsaber Versus Mode allows you to duel with your friend in an endless Lightsaber Battle, all while being in the same room. The mode gets more and more difficult as players face off against one another until one player claims victory.

We got to try out this new mode ourselves and it was a bit disorienting at first – because the other player appears closer than they actually are. But that is the beauty of it, because they aren’t, which means you can both swing away at your lightsaber without accidentally clocking one another.

“One of the most popular fan requests since the launch of Star Wars: Jedi Challenges is to enable 1-on-1 local multiplayer mode for fans to duel one another in lightsaber battles. We’re excited to continue collaborating with Disney to fulfill fans’ wishes by testing the frontiers of augmented reality. The introduction of the Lightsaber Versus Mode is another step in our journey to offering consumers one-of-a-kind, immersive experiences made possible by AR.” – Jeff Meredith, Senior Vice President and General Manager of Lenovo Consumer PCs and Smart Devices

A multiplayer mode has been one of the most requested additional features for Jedi Challenges. And while the update is free, you will need to have two Star Wars: Jedi Challenges systems to take advantage of it.