I was lost in Target yesterday. This is a common occurrence since they recently remodeled my local store, and apparently also rearranged the alphabet so the aisles go A, B, Q, D, C. In any case, I turned a corner in search of blenders and instead found a cassette player. 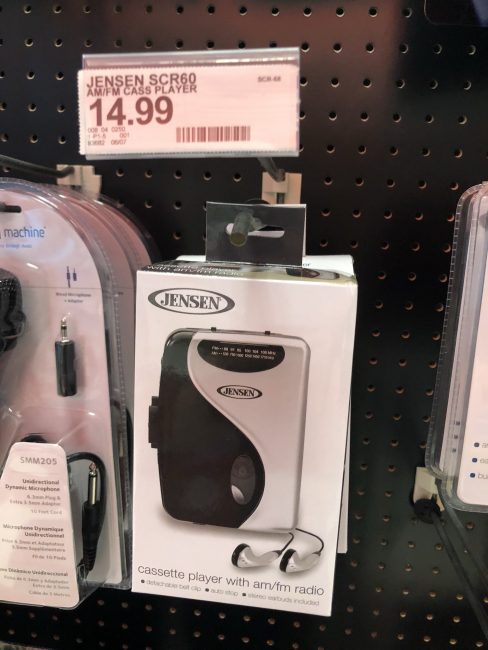 No, that’s not a typo, and as far as I know, I didn’t briefly time travel to 1988. It appears that Target sells brand new cassette players. Complete with an AM/FM radio! It has ALL the benefits one would want from a cassette player, like, uh…auto stop! A removable belt clip! And “stereo earbuds”. I even checked Target’s website and it’s a legit product, not some old inventory they found during their remodel. FYI, it only gets 3 stars, so…

I am honestly mystified because I’m having a hard time figuring out why someone would need this. Cassettes haven’t been in wide use for quite some time, except maybe in small voice recorders, and even before those went mostly digital the tapes were quite small. Stereos don’t come with cassette decks anymore, so you can’t even make someone a mix tape for retro fun. There’s probably a market for portable CD players (I just bought a car and it doesn’t even have a CD player anymore!) Most people probably have a stack or two of CDs lying around, but does anyone have a secret stash of cassettes in case they come back like vinyl? On the upside, it’s only $14.99 to pretend it’s 20 years ago, but is anyone excited to see that?

Besides this guy, of course.