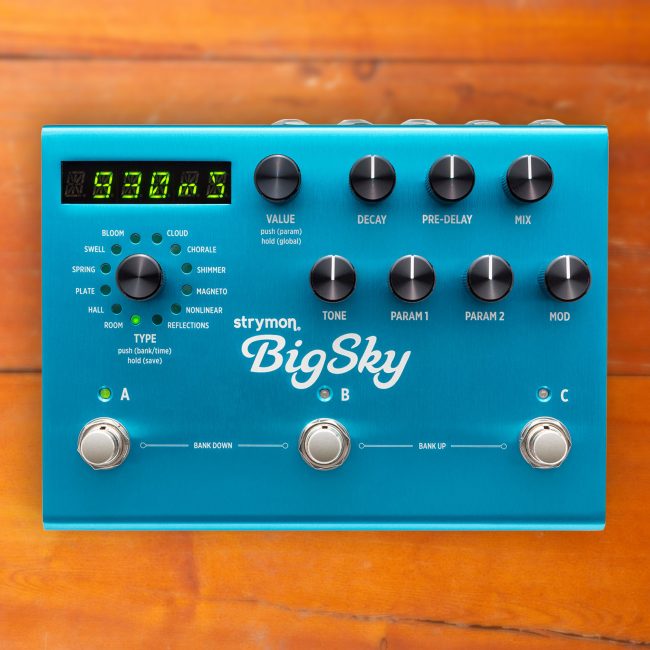 For a relatively new company, Strymon has built itself a massive reputation for premium performance. Go to almost any band’s live show, and there’s a very good chance you’ll see at least one Strymon pedal on the guitarist’s pedalboard.

However, that performance isn’t cheap.

The only Strymon stompbox with a list price below $299 is their OB1, a compressor and clean boost, and even that is about twice the price of similar pedals by other companies.

But there are plenty of effects companies with pedals in the multi-hundred dollar range, but few of them are as ubiquitous as Strymon’s units.

One of the shining stars of the Strymon catalog is the BigSky Reverberator. The BigSky is a beefier version of their famed BlueSky, which has become the industry standard for lush, atmospheric reverb pedals. I myself had a BlueSky on my rig for a number of years and had loved it.

But when the promo videos for the BigSky started circulating a few years ago, I felt a mighty need. There were twelve individual modes, ranging from classic Spring and Hall reverbs to more experimental tones like Shimmer and a Chorale setting that emulates a human choir.

Record scratch noise. I’m not one to turn my nose up at spending money on effects pedals, to my wife’s chagrin. But when you’re knocking on the floor of the $500, you might as well add it to your home insurance policy, just in case anything happens.

But the more I saw the unit in action, the more I needed to get it into my life. After playing guitar for an absolutely terrible wedding—and adjusting my fee to account for my trouble—I treated myself to my very own BigSky.

Right out of the box, I knew I loved it. The chassis is sturdy and brushed with a beautiful light blue finish with green LEDs. The knobs and footswitches are solid, unlike the flimsy components of so many other pedals. The LCD screen is bright and easy to read, even when playing on a sunny day.

The pedal features true stereo inputs and outputs as well as jacks for MIDI control. There is an assignable expression pedal jack that can be used to control any parameter or used with a tap tempo. It also includes Cab Filter toggle to simulate a guitar amp when playing direct into a mixing board or computer. There are 100 banks to save presets, each with three slots for presets. The banks are easy to navigate between—so easy in fact that I sometimes accidentally switch banks when I’m trying to turn an effect on or off, but that’s user error.

That’s all well and good, but it’s not the point. A good-looking exterior and easy-to-use controls don’t make a $500 pedal. How does it sound?

In a word: sublime.

Of the twelve different modes, every one of them sounds beautiful. Each mode has several different mode-specific parameters that can be tweaked to fine-tune the exact tone you want. For example, the Chorale mode even lets you choose the vowel that the choir sings. The Shimmer has two separate pitch shift signals that can be set to different intervals. It also lets you choose between a regenerating shift or a single shift.

Obviously, the more traditional reverb modes like Spring, Room, and Hall all sound great, but if you’re going to drop this much on a reverb unit, you’re probably going to skip over them in favor of the more experimental modes. Two of my favorites are Bloom and Cloud. The Bloom mode slowly builds the reverb up behind the dry signal, which allows you to have a huge reverb tone without losing the articulation of your playing. The Cloud setting emulates late ’70s digital reverbs that fed multiple delay units into each other to create huge atmospheres.

The great tones are augmented with a true analog bypass. Where many digital effects alter your tone considerably, the BigSky leaves it untouched, allowing you to get the reverb tones you want without losing any of your guitar’s tone.

There are dedicated Tone and Mod knobs that control every mode. The Tone knob darkens or brightens the signal, which opens up a ton of possibilities. The Mod control adds modulation to each of the different modes, creating lush, warbling textures. However, the Mod knob controls both the depth and rate of the modulation. In such an advanced, versatile pedal, I can’t fathom why they wouldn’t have given you control over both like the Deluxe Memory Boy does. The single knob manages to give a lot of control, but I would love to make a setting with a slow-moving, deep modulation. C’est la vie.

In the end, the Strymon BigSky is one of the most gorgeous sounding, versatile reverberators on the market. The price tag might be a lot to swallow, but if you ask me, it’s absolutely worth it. It’s become one of my most-used pedals, and I’ve barely scratched the surface of its functionality. I generally switch between only three settings, and I’ve never ever plugged in a MIDI cable or expression pedal, and even those three sounds would be worth the price for me.

The Strymon BigSky retails for $479 and it is available on Sweetwater.com or most other music retailers.

What I Like: unbeatable tones, endless versatility, a dozen great-sounding reverb modes.

What Needs Improvement: there could be more control over the modulation, but that’s just splitting hairs.