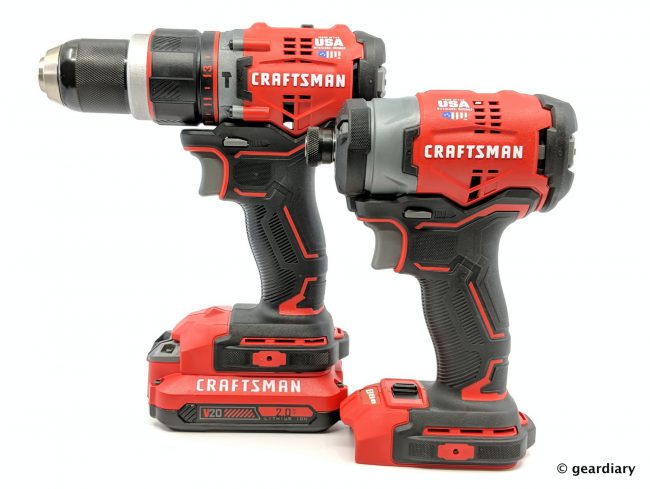 No proper toolkit is complete without a drill and impact driver; a drill can drill holes and drive screws, and an impact driver is used to do one thing — drive screws quickly and efficiently. The Craftsman V20 2-Tool Brushless Cordless Combo Kit has both tools, two batteries, and a charger; it is ready to go to work!

Most of us are used to seeing cordless drills; they are the one tool that seems to be able to do almost everything from drilling holes to driving screws, to accepting other accessories including wire brushes and rotary sanders. If you can only have one power tool, it’s got to be a cordless drill. But an impact driver is a tool that does one thing perfectly — and that’s to drive in screws and lag-screws — even the longest or bulkiest. If you have a big job coming up, like building a back deck, putting in subflooring, or framing a spare room, an impact driver will allow you to get that job done efficiently and quickly. The beauty of having both tools is that there is no need to stop what you are doing when you’ve drilled a hole to change attachments; you have a tool for drilling, and you have a tool for screwdriving.

According to HowStuffWorks, “The basic difference between a hammer drill and an impact driver is the direction from which they each exert additional force on their twisting action. A hammer drill exerts greater force directly into the bit as it hits the material being drilled, while an impact driver increases the force being delivered perpendicular to the bit.” They go on to say that “If you’re using a hammer drill, [you should] picture someone slamming the back of the drill harder into [the] surface being drilled. That’s the direct force; it’s why a hammer drill can feel almost like a jackhammer in your hands. In contrast, an impact driver has a special mechanism inside of it that pushes a small anvil against the rotating mechanism (on the inside) from the side. This perpendicular pressure has been described as increasing the force on a wrench around the screw, as opposed to just pounding the screw in with more force directly on its head.”

So that’s the difference. The Craftsman V20 2-Tool Brushless Cordless Combo Kit has both power tools, so no matter what job you are faced with, you’ll have the proper equipment. Just don’t forget your safety goggles — and a set of bits, because they aren’t included. 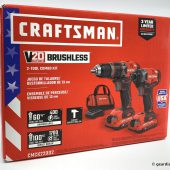 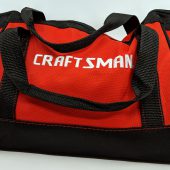 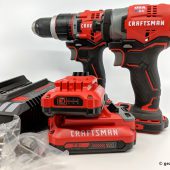 This made in the USA with global materials CRAFTSMAN V20 20V MAX 2-tool Combo kit provides a solution for all of your drilling and fastening needs. Both tools feature a brushless motor resulting in more runtime and improved durability. The 1/2-in brushless hammerdrill’s powerful motor products 400 unit watts out of power for a variety of applications in wood and concrete. The metal ratcheting chuck provides improved bit retention and durability. The premium brushless 1/4-in impact driver has a MAX torque rating of 1,700 in-lbs for speed and ease of driving large fasteners. The variable 3-speed settings provide maximum control in application. Both units are lightweight, compact, and have comfortable overmolded grips for reduced user fatigue. 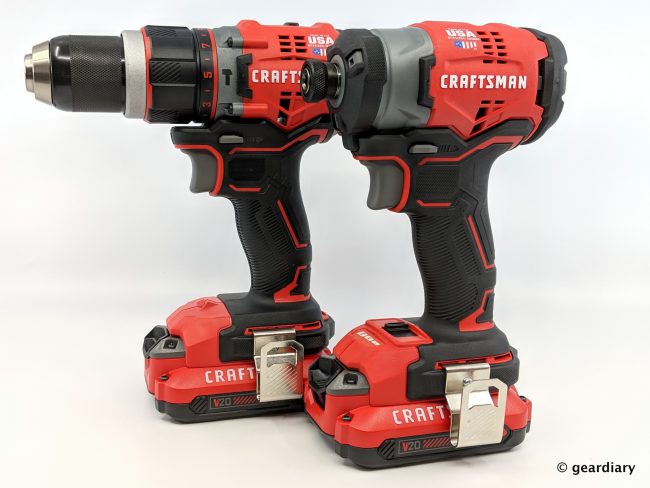 Note the holes in the belt clips; you can use them to hang the tools when they aren’t in use.

One of the things that I was blown away to learn about the new Craftsman V20 battery packs when attending the Craftsman Event in Baltimore is how versatile they are. There are a ton of Craftsman tools that can run from them. Mine arrived partially charged, and in about 10 minutes, they were each fully charged; the batteries will last for around 60 minutes of use. 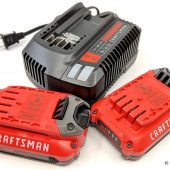 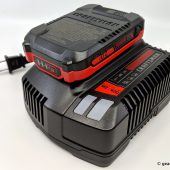 There is a battery life indicator built into each battery, so you’ll never have to wonder; it’s a nice feature. 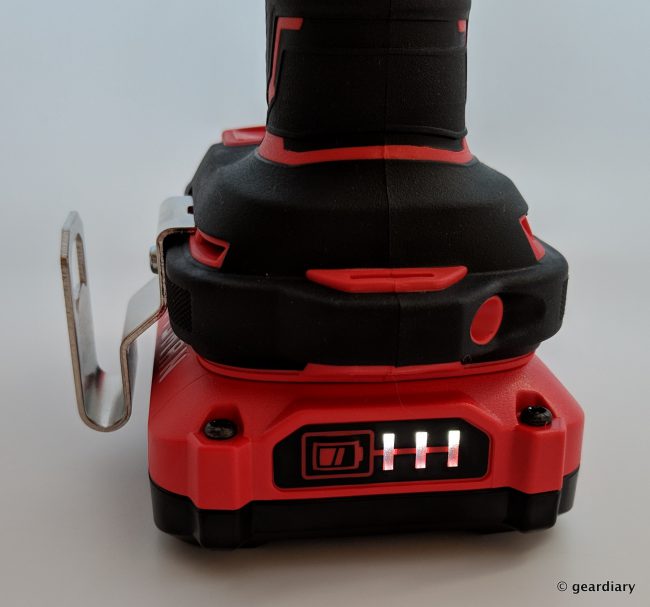 Let’s take a look at each power tool. 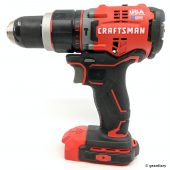 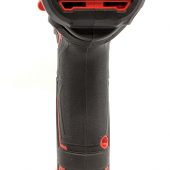 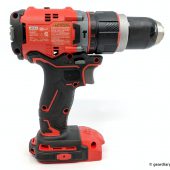 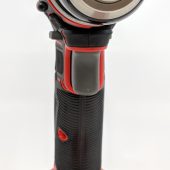 With the battery installed, the hammer drill measures about 9.25″ tall by 8″ long (not including any drill bit), and 3″ wide; it weighs ~3 pounds 10 ounces. The hammer drill has a viable speed trigger switch, a forward/reverse button, a large and easy to grip torque adjustment collar, a speed selector, an LED work light (it turns on automatically when the drill is in use), a keyless metal chuck, and a battery release button. The hammer drill produces 400 unit watts out and 34,000 Bpm’s, and it can easily handle concrete block, brick, and wood; the ergonomic rubber grip makes it comfortable to hold for long periods of time. 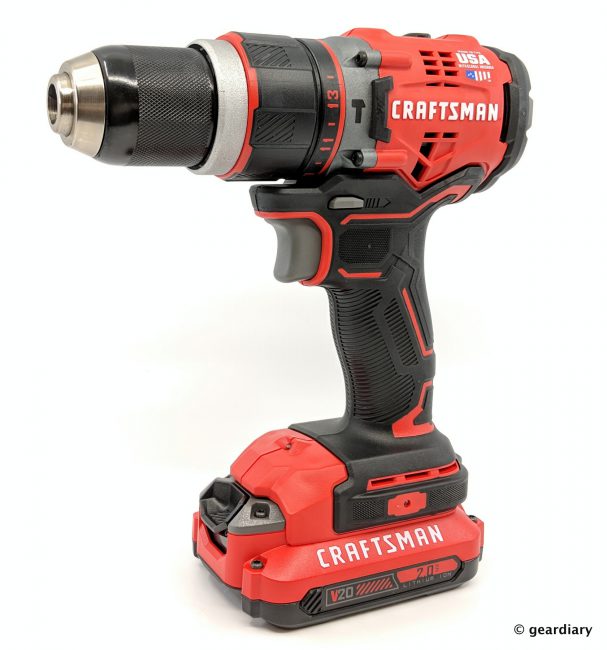 The bit jaws are large and pointy — perfect for grabbing any smaller bits. 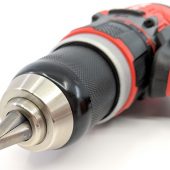 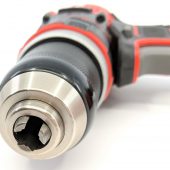 The speed selector on the top of the drill allows you to shift gears from high (2) to low (1). The torque adjustment collar has a hammer drill setting (the hammer icon), a screwdriving setting (the screw icon), and 13 numeric settings. The numbers are used to set the clutch to deliver a torque range. The higher the number on the collar, the higher the torque and the larger the fastener which can be driven; you can only adjust the torque when in screwdriving mode. The LED light is nice because it stays on for about 20 seconds after you’ve released the drill’s trigger — you can actually look at what you’ve done. 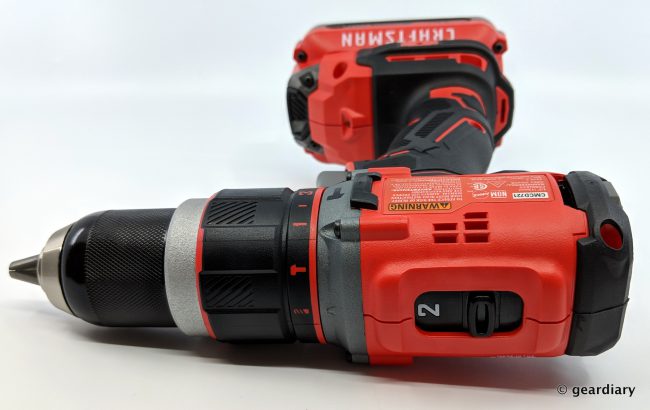 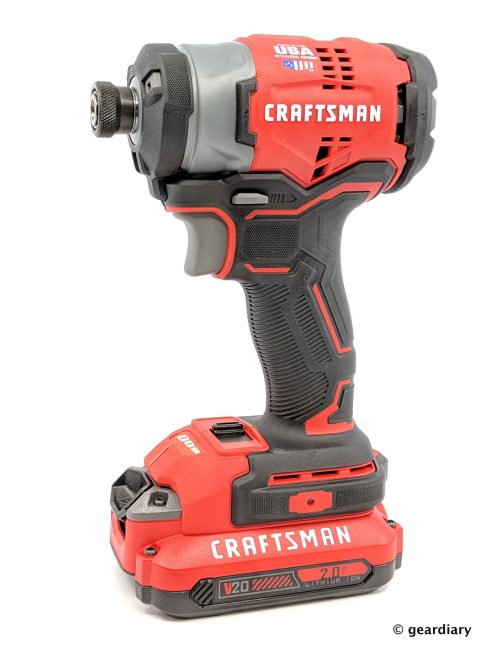 With the battery installed, the impact driver measures about 9.25″ tall by 5.3″ long (not including any hex accessories), and 3″ wide; it weighs ~2 pounds 15 ounces. The impact driver has a variable speed trigger switch, a forward/reverse button, a metal chuck collar, a 1/4″ (6.35mm) hex quick-release chuck, a battery release button, an LED work light (it turns on automatically when the driver is in use), and a speed selector. The impact driver delivers 1,700 in-lbs of torque for heavy-duty fasteners, and it features 3 speeds with a MAX speed of 2,900rpm. The LED light on the impact driver also stays on for ~20 seconds after the trigger is released, and it also has an ergonomic rubber grip.

The speed selector allows you to choose between three modes: 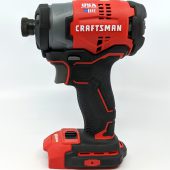 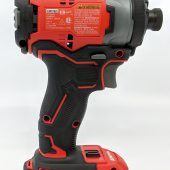 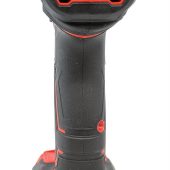 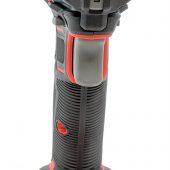 The impact tool can generate the following maximum torque:

Here’s a simple video of Kev showing the two tools in use.

The included hooks don’t look like much (they’re similar to the ones included with other power tool brands), but they hang the tools off your belt or pocket just fine. They also have holes in them, so you can hang the tools when they aren’t in use. 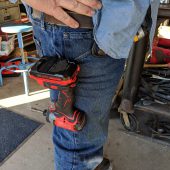 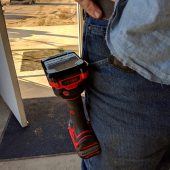 The Craftsman V20 2-Tool Brushless Cordless Combo Kit is the perfect set of power tools for anyone who has a large job on the horizon or who wants to be ready for anything. Whether you are contemplating a weekend project or you need it on the job site, the ergonomic handles, lighter weight, long-lasting battery, and the power of each tool makes this set a smart purchase or a welcome gift. 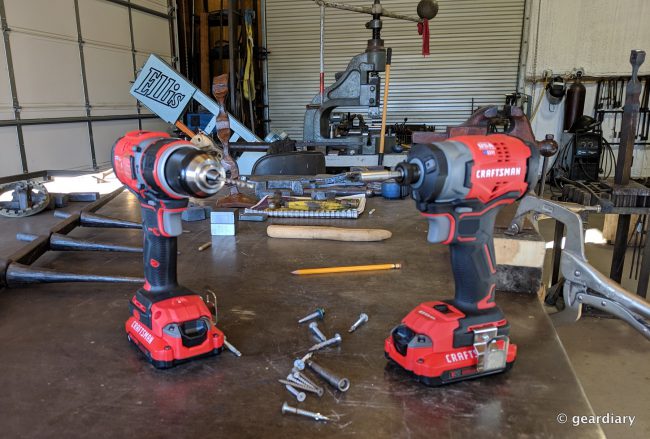 The Craftsman V20 2-Tool Brushless Cordless Combo Kit retails for $249, and it is available from Lowe’s and other retailers.

What I Like: Ergonomic handles; Battery lasts a long time; Tools are powerful and professional quality; V20 Battery can be swapped between multiple V20 Craftsman power tools; Made in the USA (with some foreign parts); Lightweight; No need to switch bits as you have two tools for separate jobs; Battery life indicator on each V20 battery; 3-year warranty; Two belt hooks are included

What Needs Improvement: No bits included, so that’s a separate purchase