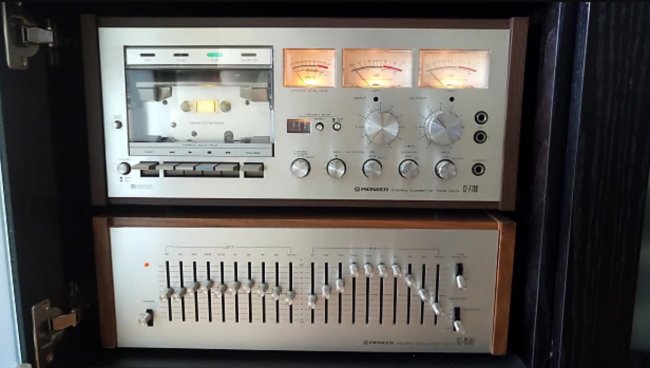 With the ever-growing vinyl boom gaining more ground among young music fans, there’s been no shortage of interest in vintage audio gear. Hipsters have been trolling through thrift stores in search of discarded stereo receivers, turntables, and even tape decks. Countless guides have been written about setting up a premium hi-fi setup—I even wrote one myself.

But through all the talk about what to look for in a system and how to set it up, there’s one absolutely essential piece that’s rarely mentioned.

I’ve been collecting vintage stereo equipment for the better part of fourteen years now, and I just added an equalizer to my system. Note: this is after I specifically overlooked my mom’s equalizer back when I pieced together my own stereos out of her old audio equipment.

And within the first few minutes, I felt like I had been wasting my time. Why did it take me so long to add an equalizer?

Realizing the error of my ways, I am here to set the record straight for the rest of you. If you want to get the most out of your hi-fi setup (and why wouldn’t you?) you need to add a graphic equalizer.

Get More Control Of Your Tone

Every stereo receiver has some sort of tone control. At the very least, they will have separate knobs for bass and treble—sometimes labeled as low and high. Some systems offer a bit more control with a button marked “loudness” (my receiver calls it “contour”) that boosts the high-end and low-end signals while lowering the mids.

On the other hand, a graphic equalizer gives precise control over many more frequencies in the signal. The most basic component equalizer might have five bands, but it’s much more common that they have fifteen. The one I added to my system has sixty—thirty for each channel.

While a basic two-knob-plus-loudness setup might allow you to have plenty of control over the tone of your system, those knobs are generally very broad. For instance, you might not be able to turn up the bass frequencies without also turning up that muddy rumble. Or maybe you can’t turn up the brightness of a hi-hat without also turning up the harsher elements of distorted guitar.

With a separate equalizer, you can control a much narrower range of frequencies, getting perfect tone every time.

Compensate For the Room

No matter how much you’ve put into creating the perfect listening room, the space is going to have some effect on the sound. Perhaps the best example of this is Alvin Lucier’s sonic experiment, “I Am Sitting In A Room.” He records himself reading a simple sentence, then plays it into a separate room. He then records the sound of it playing in that room and replays it, recording each playback. Eventually, all you can hear is the sound of the room’s own reverberations.

If you really want to get the most high-fidelity listening experience you can, you have to do what you can to compensate for the room. Every theater and music hall has a set equalizer to clean up inconsistencies in their room, and they’re specifically built with audio clarity in mind.

Admittedly, my stereo set up is not ideal. My speakers are built into my wall of bookshelves, tucked into the corners of the room—a fact that the audiophiles on Reddit promptly chewed me out over when I shared a photo there. The space doubles as a living room, so the speakers are partially obstructed by chairs. The room has hardwood floors, which does nothing to dampen the sound from the speakers.

But with the addition of my equalizer, I could compensate for all this. I boosted the frequencies that were lost behind the furniture. I lowered the tones that would run amok bouncing between the hardwood floor and plaster ceiling. It tamed the sound of the room and also lets me turn up the volume more than I could have before without losing quality to a rumbling incoherence.

One of the criticisms of vinyl is that what it gains in warmth, it loses in clarity. With digital, you get a clear, crisp signal with separation of instruments and unmatched vocal clarity. Vinyl is much warmer and fuller, but sometimes that warmth and fullness makes things feel just a little muddy.

Before adding an equalizer, I thought that my system sounded great. I had added a tube buffer a few months ago, which made a big difference to improve my stereo’s performance.

But after plugging this equalizer in, I feel like I was listening to records with cotton swabs jammed in my ears. I could not believe that I had lived listening to that muddy mess.

A simple A/B test shows me how wrong I was.

Now, I have a system that sounds better than I could ever imagine. The vocals are clear enough for lyric transcription. Every cymbal hit, bass guitar slap, and guitar riff is bright and present. Even background production flourishes like ambient synths hidden in the mix are clearly audible.

And to think, I used to think I could live without this.

Setting Up a Graphic Equalizer

If you want a great sounding setup without spending gobs of money to replace your stereo, speakers, or phono cartridge, a graphic equalizer is the best investment you can make. You can find quality equalizers at thrift stores, garage sales, eBay, Craigslist, or wherever people are getting rid of their junk. I got mine when a friend’s church was tossing out a bunch of old audio equipment.

Most equalizers have RCA jacks for easy setup. Many audiophiles recommend using the tape loop on your receiver. However, if you also use a tape deck—like I do—you might not be able to set it up this way. Personally, I have my equalizer plugged in between my turntable and the receiver.

After you have it plugged in, put on some music that you know very well and start experimenting with the faders. Start with everything flat, then move each fader down and up to hear what frequencies it adjusts.

Make a few minor adjustments. You probably won’t want to have any frequency pushed all the way up or down. Sit in your primary listening spot and listen for a few moments. If your system has a bypass switch, use it to hear the difference.

Tweak the system as much as you need to get the tone that sounds best to you. You might be able to mimic some common EQ curves to get started. But at the end of the day, your ears are the final judge.

Set up the equalizer to what sounds best to you, then sit back and enjoy your favorite music sounding better than ever.