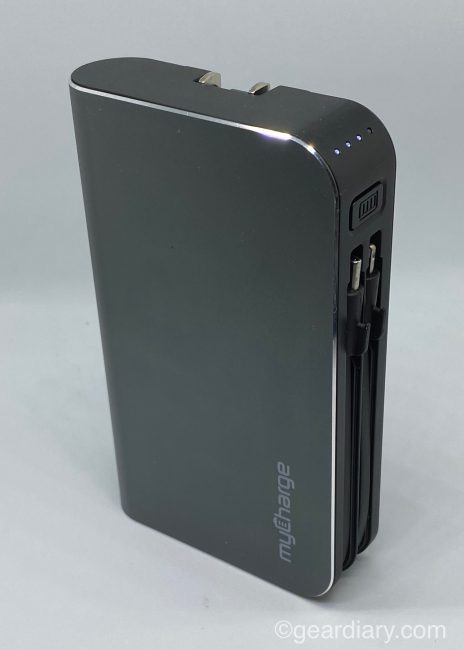 Phone and tablet battery life has slowly improved in recent years, but it still lags behind the bleeding-edge technology, so many of our mobile devices pack these days. For anyone who relies on their devices for work, especially those individuals who travel, an external battery is a must. The problem, however, is that most external batteries require you to have a cable and wall adapter for recharging the battery and a cable for charging your device. If like me, you have an iPhone that requires a Lighting cable and an iPad that has USB-C, you are looking at bringing no less than two, and perhaps more, cables with you. That’s a lot to carry and, if you forget one cable or the other, the external battery is useless.

That’s not the case with the 10,050mAh MyCharge Hub Turbo. It is a complete package that packs a huge battery and requires no additional cables or wall adapters; everything you need to stay productive or entertained is contained in one sleek unit. As the company explains:

The myCharge Hub Turbo 10050mAh portable charger is one of a kind and packed with fast power. Charge your smartphone up to 75% faster! Featuring Power Delivery & Qualcomm Quick Charge, this powerbank is one of a kind. 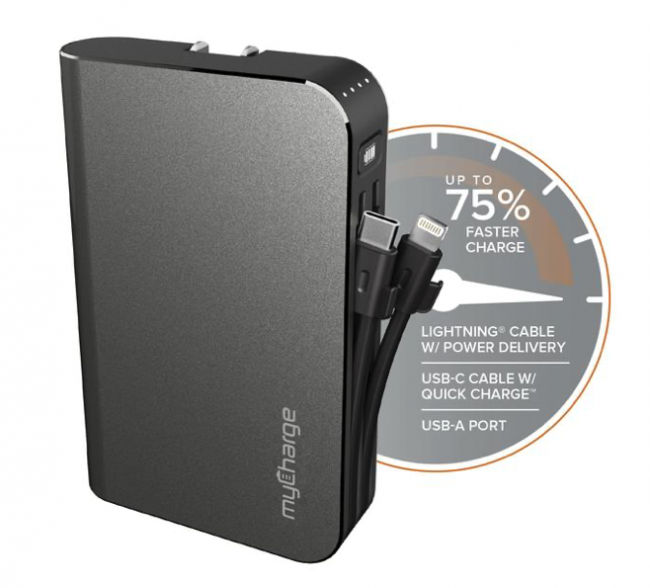 So let’s take a second look at what makes this external battery special. 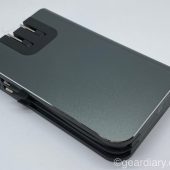 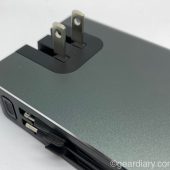 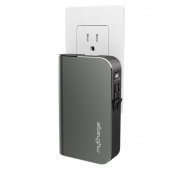 To charge the battery, you don’t need a wall adapter or cable.

The 10,050mAh MyCharge Hub Turbo portable charger has US 110V wall prongs built-in. When not in use, the prongs fold into the battery casing. That way, they can’t get bent or snag something in your backpack. When the battery needs to be recharged, you flip the wall prongs out and plug it in. The 10050mAh battery immediately begins charging.

myCharge notes that the high-density battery inside the unit allows it to be “the smallest and lightest power bank” available. Its “safe-cell” technology provides an added layer of safety for you and your devices, and its turbo-charging technology charges a smartphone at a significantly faster rate than other external batteries. Finally, the battery can hold a charge for up to a year. That means you can charge the device, throw it in your backpack, and, whenever you need it, the battery will be ready to help keep you going.

The battery also has “pass-through charging” so you can plug the powerboat into a wall outlet, connect it to your phone and tablet and charge your mobile device without the need for an additional wall adapter. That’s great if you want to travel light. 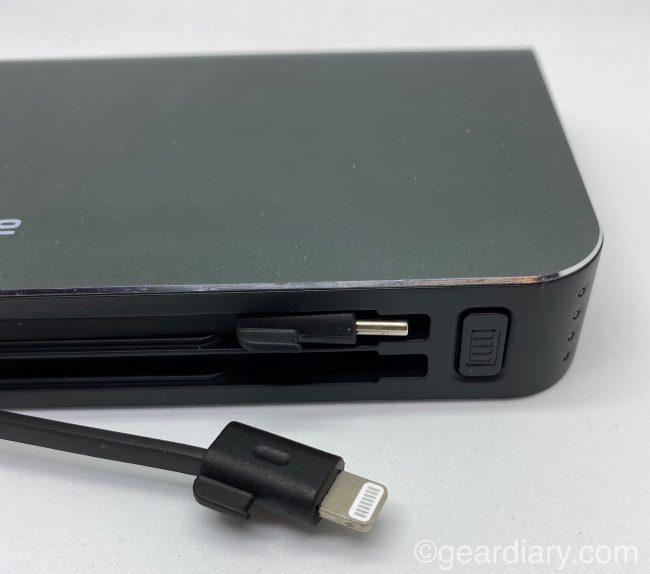 To charge your iPhone, you don’t need a Lightning cable.

One of the things that makes the 10,050mAh MyCharge Hub Turbo portable charger stand out is the integrated Lightning cable. It sits hidden along the side of the battery when not in use and, when needed, can be extended by simply pulling it away from the battery. The cable is short, but the convenience of not needing an additional cable is huge! That may not sound like a big deal but, on a recent trip to Washington DC, I had a fully charged battery but forgot to bring a cable. The battery was rendered useless, and my phone’s battery ran down by mid-afternoon. That will NEVER happen with this battery.

However, we have seen external batteries with built-in Lighting connectors previously. What we don’t often see is this… 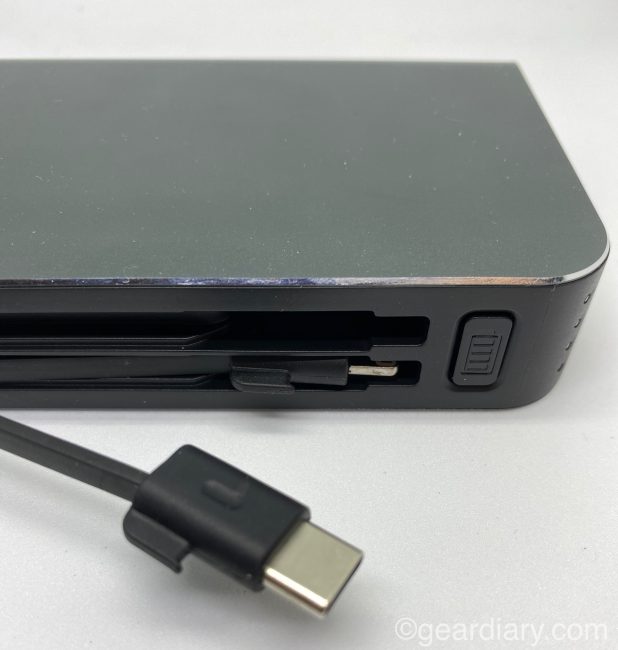 To charge your iPad, Android phone, or any other device that depends upon USB-C, you don’t need an extra cable either.

Right next to the short, integrated Lighting cable, there is a second cable. This one us a USB-C connector, and it works just as well as the Lightning connector. You can extend both integrated cables and charge two devices at once with a shared output of 3.4A. 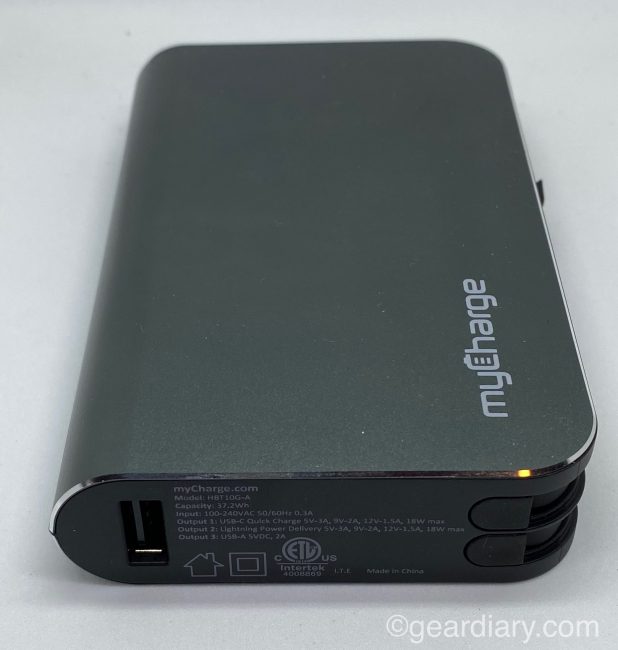 You can charge a third device too!

At one end, there is a legacy USB-A port. That means you can also plug a cable into the battery and use it to charge a third device or if you have anything that needs a micro USB, you can charge that too! 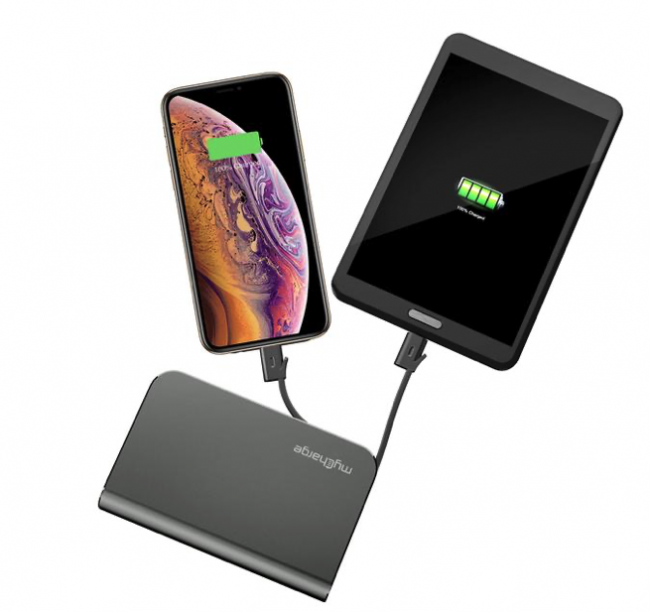 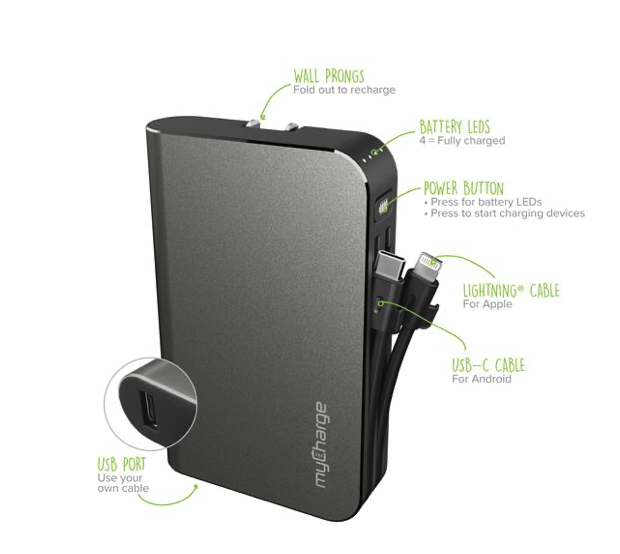 This 10050mAh Lithium-Ion battery is a bit heavier than its 6,700mAh sibling. It measures 4.6 in x 2.8 in x 0.9 in and weighs over a pound. Still, if you are traveling as I will be in a little over a week and Judie will be at the end of the month, having one external battery that integrates everything you need to keep your mobile devices running is a huge deal. When you think of it in those terms, the weight quickly becomes irrelevant. 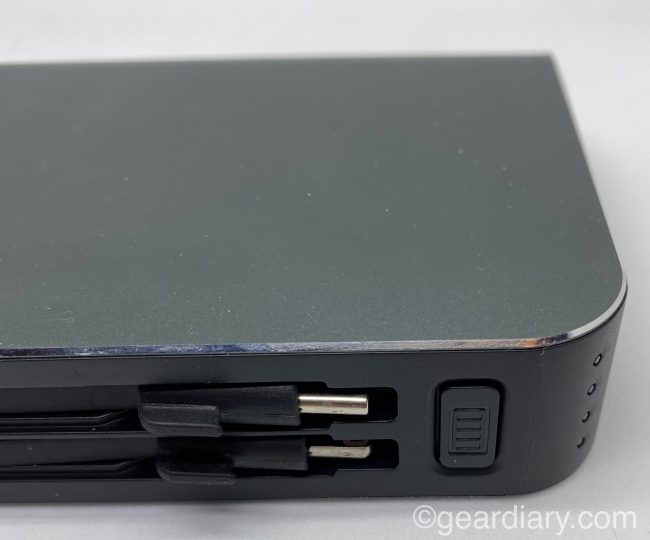 The 10,050mAh MyCharge Hub Turbo offers a huge battery and, on its own, is a complete package. That’s why the only things in the box are the battery and a bit of paperwork — no additional cables or accessories are needed. That’s good news for anyone who worries about draining their phone or tablet. Judie and I are both huge fans and when we travel, the myCharge Hub Turbo will be coming with.

What I Like: Compact; Attractive design; USB Type-C and Lightning cables built-in; Built-in wall charger; 10,050mAh; Fast charge; You don’t have to press a button for charging to start

What Needs Improvement: Doesn’t come with a protective bag so it will get scratched up in your backpack or briefcase if you aren’t careful; It’s surprisingly heavy