Posted By: Michael Anderson May 29, 2020
ShareTweet

For fans of classic PC role-playing games, few games evoke as much love and loyalty as the original Fallout 1 & 2 from the late 1990s. So in late 2017, when ATOM RPG arrived for the PC, it was met with much anticipation and excitement. In the last couple of years, the developers have been making improvements and filling out some gaps, and now the full game has arrived for iOS devices and will soon also be available for Android! 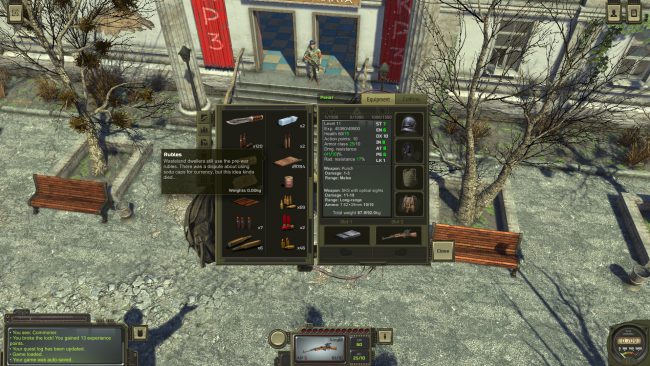 Having played the game on PC, I was very excited to get a chance to play again on my iPad – the game put you into the post-apocalyptic world of 1980s Soviet Union. You have tons of areas to explore, missions to accomplish, characters to meet, and of course, plenty of enemies to fight!
Here is the description:

In 1986 both the Soviet Union and the Western Bloc were destroyed in mutual nuclear bombings. You are one of the survivors of this devastating conflict.

Your mission – to explore the wild and wondrous world of the Soviet Wasteland. To earn your place under the sun. To investigate a shadowy conspiracy, aimed at destroying all that is left of life on Earth.

ATOM RPG is:
– A powerful character creation tool, aimed at making the wasteland hero you want to portray;
– A balanced roleplaying system. Each stat combination provides a unique gaming experience, unique dialogues, and new ways to solve some quests;
– Dozens of skills, from lockpicking to gambling;
– Many hours of gameplay on all sorts of locations. Meet the other survivors in a brave new settlement, built from the remains of the old world. Venture into the wilds, where mutants and bandits lurk. Work out the secrets of an old military bunker. Or simply lose yourself, fishing at a scenic pond;
– Turn-based combat, inspired by classic RPG’s of the nineties;
– Random encounters with the dwellers of the Soviet Wasteland – both friendly and dangerous. Sometimes all at the same time;
– Many deep, multiple-choice dialogues that feel like real conversations with the unique NPCs of the game;
– Nonlinear gameplay! Dozens of quests, some with alternative solutions. Play the game like you want to!

Head to the App Store and grab ATOM RPG for $7.99 now, and forAndroid, soon. Keep checking Google Play, where you’ll be able to find it by searching “ATOM RPG” once it becomes available.