Recently we have taken Apple to task for their lackluster take on racial justice and for making a tone-deaf product launch just as the pandemic was spiraling out of control in the US (and honestly since they were already leading with financial commitments, had they just said ‘we’re launching these products and are dedicating X% of every sale to COVID-19 relief efforts’ it would have made a big difference in perception). 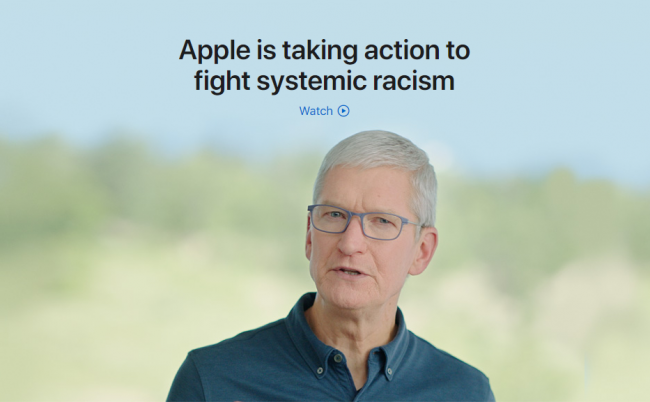 As a company that has positioned itself as being visionary and inspirational, we expect more from Apple. So when they fall short, we will call them out – and when they deliver on their vision we will praise them.

And yesterday they did just that. In a video posted to Twitter (shown below), Tim Cook announced that Apple was launching a $100 million initiative focusing on racial justice, saying in part:

the initiative will challenge the systemic barriers to opportunity and dignity that exist for communities of color and particularly for the black community with special focus on issues of education, economic equality and criminal justice reform.

Lisa Jackson was named to head the initiative, noted as someone who has led the EPA and Apple’s industry-leading environmental initiatives. She posted to her Twitter:

Fighting for equality and justice for my community has driven my career as an environmentalist. I’ll continue the work leading Apple’s Racial Equity and Justice Initiative. #BlackLivesMatter

Over the last few days, others have noted how Apple has continued to make significant contributions without needing to shout them from the rooftops or tout the amounts of every contribution in an effort similar to many companies who are coming out of the woodwork trying to appear to care. Even now we have other companies putting up large amounts of money, but several of these are targeted initiatives that will ultimately put returns into the pockets of these companies. We’ve had enough cynical self-serving greed, it is time to support companies willing to fight to deal with the root cause of these problems.

Apple is already putting tens of millions of dollars into support for communities of color throughout the country, but this special effort deserves to be called out for its size, scope, and potential positive impact. It is easy, even at this moment, to point to the top of org charts throughout the tech sector (Apple included) and see how little progress has been made in spite of past promises. But no company has ever launched an initiative such as this – and the time is now for change.

The issues of systemic racism in America and centuries of racial injustice are more than any one company or any pile of money can solve, as they involve changing hearts and minds, removing deeply held prejudice, and altering slow-moving systems of power. It will take time, focus, and money – and companies like Apple who have long championed human rights causes.

Check out the video.

The unfinished work of racial justice and equality call us all to account. Things must change, and Apple's committed to being a force for that change. Today, I'm proud to announce Apple’s Racial Equity and Justice Initiative, with a $100 million commitment. pic.twitter.com/AoYafq2xlp