My family went to see The Lorax in 3D yesterday. It took a little bit of convincing for Kev’s almost-13-year-old to get into the spirit of seeing a “kid’s cartoon”, as she was much more interested in seeing Eddie Murphy’s 1000 Words [not happening], but the 9-year-old was eager enough. Mentioning that the movie was done by the creators of Despicable Me (a DVD go-to favorite of theirs) got everyone in a good mood, and we were off!

Many of you will remember the Dr. Seuss book of the same name that this movie was based upon, but just in case you missed it — here’s a snippet from the Amazon synopsis:

The Lorax is an ecological warning that still rings true today amidst the dangers of clear-cutting, pollution, and disregard for the earth’s environment. In The Lorax, we find what we’ve come to expect from the illustrious doctor: brilliantly whimsical rhymes, delightfully original creatures, and weirdly undulating illustrations. But here there is also something more–a powerful message that Seuss implores both adults and children to heed.

The new Lorax version has received the typical Hollywood adaptation treatment. While the premise is fundamentally the same, and the characters who actually had names in the original story still have the same names, what began as a short children’s story has been stretched into a computer-animated feature film lasting 86 minutes. Portions of the movie will be recognizable to anyone who knows the story, but there was a lot of “artistic license” taken …

Although I found the musical numbers to be tedious and a bit mediocre (and I generally like musicals), there was one song that genuinely surprised me: “How Bad Can I Be?”

What starts as Once-ler’s excited battle cry as his Thneeds business takes off, soon careens into this maniacal, everything-negative-about-Capitalism gloat … including the moment where the Once-ler walks under a poster of himself that states his business is “Too Big To Fail.”

The poster’s meaning was likely something that went over every kid in the theater’s head, but any mom or dad paying attention probably caught themself thinking “huh?!” as the song progressed and the poster was passed. Of course, disaster comes as the last Truffula tree is chopped down, and the forest’s inhabitants are forced to move on and with no Truffula tufts left to harvest, the Thneeds factory is shut down. The Lorax leaves in disgust, and the Once-ler is left alone … until the boy comes and can be presented with the last Truffula tree seed which must be planted. The movie has a lot more going on than the book’s elegant simplicity, but the message is ultimately the same. 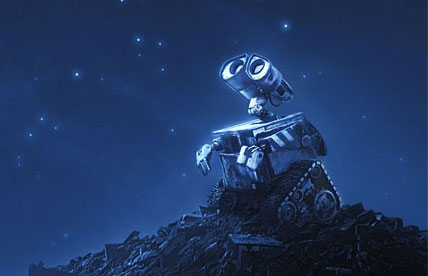 The Lorax brought up similar feelings to those I felt when watching the 2008 Disney film, Wall•E, another “children’s” movie showing an after-world where nothing is as we know it now. If you haven’t seen the movie, here is a portion of the IMDB synopsis:

In a distant, but not so unrealistic future, where mankind has abandoned earth because it has become covered with trash from products sold by the powerful multinational Buy N Large corporation, WALL-E, a garbage collecting robot has been left to clean up the mess. Mesmerized with trinkets of Earth’s history and show tunes, WALL-E is alone on Earth except for a sprightly pet cockroach. One day, EVE, a sleek (and dangerous) reconnaissance robot, is sent to Earth to find proof that life is once again sustainable.

After seeing The Lorax, and after watching Wall•E more times than I care to admit (whether as an active participant or because I happened to be in the same room at the time), I have to wonder if movies like this are effective at raising children’s awareness of environmental issues? Are they simply processed as animated entertainment? Or am I not giving children enough credit? Do the kids who watch these near-apocalyptic cartoons understand them to be cautionary tales? Do they get that even if the stories are full of hyperbole, there is a kernel of truth contained in them that we all should know?

Those are the questions I’m left with.

As we walked out from the theater, the girls both said that they thought the movie was enjoyable, and I agree … but I also said that I now felt an overwhelming need to go plant a tree. They nodded their heads and laughed … and I’m not sure any lasting impression was truly made.

Based on your experience with movies like The Lorax and Wall•E and your knowledge of your kids (or yourself), what do you think? Do movies like these make a difference on how kids perceive their environmental impact and responsibilities?