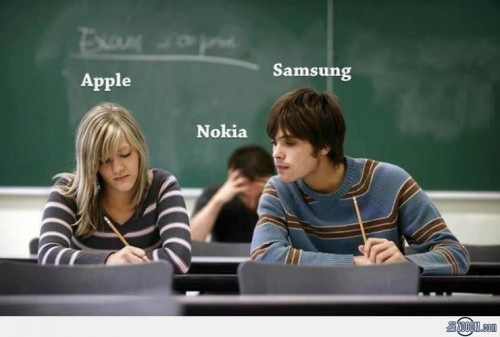 I have been critical or at least suspicious of Samsung for many years for simple reasons: I find that they employ an ‘end justifies the means’ mentality, paired with a ‘fast follower’ technical approach, that allows them to overtake competitors with solid products that too-closely resemble the competition. Micron was the leading memory company in the world until they fell victim of Samsung, Apple is parting ways with Samsung after a few years of bitter lawsuits over technology copying, and now AppleInsider poses the question “Is Nokia dumping Samsung for copying their technology?” in their post Nokia rumored to join Apple in dumping Samsung as a supplier.

Why does this matter? Because for Samsung, mobile devices provide a much-needed new revenue stream – but being a massive semiconductor supplier is their ‘bread & butter’. This presents a challenge – they are simultaneously making components designed by others in one division while making devices that compete with those very components in another division. The potential for conflict of interest is huge, which is why Samsung has always said they have a ‘strict internal firewall’.

But ‘sources’ have told AppleInsider that the internal firewall is as “about as sturdy as a pile of kimchi.” (and as kimchi is a fermented vegetable dish, that isn’t very sturdy). They are claiming that Samsung has been stealing the technology developments of others such as Nokia and releasing them in Samsung products.

Do we know if any of this is true? Absolutely not – we will never know all the inner workings of the memory market of the late 80s, we will probably never know the truth about Apple vs. Samsung, we will not know if Samsung really did steal even of LGs OLED design patents … and we won’t ever truly know if Samsung has been stealing technology from Nokia.

And I want to make a clear distinction between stealing technology and making good products. The Galaxy SIII and Galaxy Note II are excellent devices; they contain many unique features, and they are well worth your time and money. However, that has nothing to do with whether any of the technology inside was actually designed by others.

But I tell you this much: if I was looking for a foundry to build chips for my cool new Consumer Electronics product, I would talk to TSMC, or SMIC, or UMC or Tower … but I would NOT talk to Samsung.