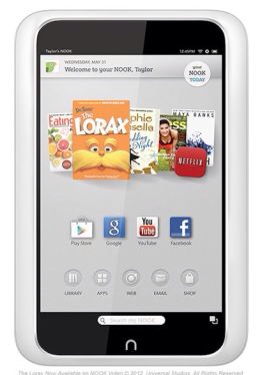 News broke today that Barnes and Noble is opening up the NOOK hardware to Google, adding Google Play to their NOOK HD and HD+ devices. Is this a canny move to capitalize on tablet demand, or a desperate grab for any port in a storm? Does this actually matter to the average buyer? As our own Mike Anderson asked, “Is abandoning their own ecosystem a desperate move?”

I think this is great news for the ten bloggers who really love the NOOK HD hardware. Except for a few Android users who can re-download their apps across their phone and NOOK, the average person probably won’t notice the difference. But this is a shift for B&N since the word “Android” rarely appears on the product pages and almost never appears in their ads. As a result, it is hard to say that their customer base was clamoring for something they may not have known they could have. Yes, a minority saw NOOKs as a neat way to make an Android tablet, but it’s not like it is hard to just buy an Android tablet … no need to deal with the B&N software as well.

That leads to the biggest problem the NOOK hardware has in my opinion: price. It’s $229 for a 16GB NOOK HD. Once someone gets over the mental hurdle of spending $229 on a tablet, I suspect it isn’t too hard to spend the extra $100 and get an iPad mini. (And with refurbs now below the $300 mark, it is even less of a leap.) Let’s look at how the pricing breaks down.

Someone who is price sensitive is going to turn to a Fire, or a Nexus 7, or a lower end NOOK tablet. Someone who isn’t on a tight budget choice ranging from the iPad Mini to the Samsung Galaxy Note 8.0. Someone who really wants a true” Android tablet has a slew of affordable options, from Samsung Galaxy Tabs and Notes to the Nexus line. And someone who is on a tight budget but wants an Android tablet with some quality is probably not snapping up a tablet that’s more expensive than Google’s own Nexus 7, or they’re buying last year’s Kindle Fire or NOOK Tablet.

In other words … there’s just not a lot of room for B&N to be yet another tablet maker, and it gets worse. The things that make them pop (family profiles, special kid-modes, sharing options) have absolutely nothing to do with Google Play, so someone buying a NOOK for these reasons doesn’t even care about Play.

In short, this is a desperate attempt to please everyone, and — as is so often the case when you try to do that — it pleases no one. That, in turn, will translate into low sales or, potentially, no sales.  This inability to link what makes the product interesting to what the marketing department apparently thinks is interesting is going to kill what was once seen as a very interesting product. At this point, it almost feels like B&N wants to be an also-ran!