Posted By: Michael Anderson May 7, 2013
ShareTweet 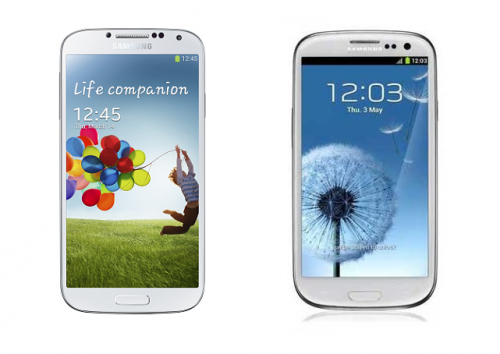 Samsung recently started delivering their new flagship, the Galaxy S4. The GS4 is the follow-up to the Galaxy S3, which is the best-selling Android phone ever made, and one of big reasons Samsung is now the largest smartphone maker in the world. The GS3 was itself the sequel to the earlier best-selling Galaxy phones – but with the GS3 Samsung went from being a ‘leader’ to becoming the de facto Android flagship and market leader. Early critical and user reviews for the new S4 have been generally solid but not exactly glowing – and with more and more issues cropping up as users get their hands on the device, I wonder if this ‘lackluster’ view of the GS4 will hurt Samsung going forward?

If you look at the image at the top, you will see the GS3 and GS4 next to each other. The two devices look very similar, with nearly identical dimensions and a very similar look & feel. This is clearly an incremental upgrade, with the screen size moving from 4.85″ to 5″, new processor options (1.9GHz quad core or 1.6GHz octa-core depending on region), 13MP main camera, and so on. In other words – this is a monster device.

But like any device made in the real world, the GS4 is not a perfect device. As noted, the reviews for the device are less than enthusiastic – none are negative, but neither are there any of the ‘BEST PHONE EVAR’ type of gushing reviews we saw for the GS3. Worse yet, there are some specific problems that many, many users are complaining about – some that seem like they can be solved with patches, others appear to be hardware related and might never go away.

What are the issues?

All of those are at least annoyances, but do you know what I consider the biggest impediments to success for the GS4? Lack of Compelling Features and the Galaxy S3. Let me explain.

If you watch the latest Samsung commercials, you will see a Samsung phone featured being used by all of the smart and young people … and iPhones used by old and dumb people (well, not even old, just … parents). But if you were asked to make the same commercials using the Galaxy S3 or the Galaxy Note 2 … it would not be a problem. NFC, remote control, image editing tools, and on and on – all are present across the older devices as well. In fact, in one of the commercials my initial thought was that I was seeing a Galaxy Note 2. In fact, all of the software updates for the Galaxy S4 are either already on the GS3 or are coming soon.

Which is why I say that the Galaxy S3 is one of the biggest problems for the GS4. Samsung has a history of hot selling cheap plastic phones, and I wasn’t all that enamored with the Galaxy S2 – or at least the one of 17 designs I got to use. The Galaxy S3, in spite of the plastic, is the first ‘great’ smartphone from Samsung, in my opinion. Everyone in the world got the same look and feel, and it was distinct and attractive and loaded with features.

So what does the Galaxy S4 bring? A bigger screen with higher resolution and a slightly better processor and a case that fits the bigger screen in a slimmer but otherwise nearly identical case. And also pretty much the same software except for some extremely limited gimmick features.

The new commercials are great fun, but the reality is that half the features are turned off by default due to battery concerns, others require detailed setup before use, and most only work in Samsung-specific apps, not even in the Android-generic apps.

But Will It Matter?

If you ask Dan or Mitchell, they will sing the praises of the HTC One in terms of design and build quality in particular, and also the feature set and user experience. [Mitchell’s full review on the Samsung S 4 will be coming soon – Judie]

But when it comes to competition, there is the HTC One, the Google Nexus 4 … and really nothing else. The Nexus 4 is a solid device that has sold well and gotten good reviews, but hasn’t even remotely dented the Galaxy S3 juggernaut in spite of equal or lower price and better specs.

And HTC has been bleeding money and market share lately; they have adopted confusing naming policies, they’ve regularly abandoned current users and been less than truthful about updates, and so on. In other words, they have done little to engender brand loyalty.

Samsung has been quick with updates, and by moving to a unified design/dual processor model, they have allowed accessory makers to push out cases and other add-ons; they have also made it easier for uses to keep up with Android updates. The GS4 launches with the latest Android OS, whereas the HTC One is already a couple of steps back.

The reality is that the quality and popularity of the Galaxy S3 will very likely cut into the adoption of the GS4 in ways Samsung hasn’t seen – but in ways that Apple HAS seen with the iPhone 4 and 4S sales levels remaining high. Carriers will be able to offer the GS3 for cheap on contract or full retail, and for those looking for the ‘best new Android phone’, Samsung has become THE Android flagship. So the question for most won’t be ‘which Android phone’, but rather ‘which Samsung phone’.

And I don’t see these shortcomings, issues, or a general sense of ‘minor incremental update’ doing anything to change that.